Colossians 3:16 says, “let the word of Christ dwell richly among you.” But sometimes, in our enthusiasm to recall biblical stories, we entertain details that aren’t actually supported by the text.

Here are seven things Christians tend to remember incorrectly about the Bible.

1. It began raining as soon as God brought the animals on board Noah’s ark.

According to a popular children’s song, the flood began right after the animals entered the ark. This supposed timeline is often repeated in Bible lessons on the flood. But the notion is challenged by Moses’ writings in Genesis 7:9-10:

“Two of each [animal], male and female, came to Noah and entered the ark, just as God had commanded him. Seven days later the floodwaters came on the earth.”

Turns out, Noah waited a week from when the animals entered the ark to when the rains first fell.

During this time, he was likely tempted with doubt, frustration, and irritability. He may have had to fight pride as he longed for the skies to open to avenge his name against his neighbors’ mocking accusations.

Scripture doesn’t reveal why God had Noah wait for a rainless week. We know, however, that God is honored by belief and self control in periods of waiting. It’s a lesson we often overlook in our rush to get to the more dramatic elements of the flood story.

2. The Exodus began during the day.

Movies such as Cecil B. DeMille’s The Ten Commandments and The Prince of Egypt depict the Israelites leaving Egypt at daybreak. While the massive event likely spilled over into the day, the biblical account leans toward the initial journey actually occurring at night (see Exodus 12:30-34; 41-42; Deuteronomy 16:6).

This timeline stresses the Egyptians’ dire urgency to get rid of the Hebrews immediately following the final plague that took their firstborn males—a scenario remembered for generations through a Passover diet consisting of unleavened bread eaten in great haste.

3. Mary Magdalene was A) the woman who anointed Jesus’ feet with expensive perfume, and B) a former prostitute.

Mary Magdalene is often assumed to be the woman from Luke 7:36-50 who anoints Jesus’ feet with perfume and wipes it up with her hair. This notion is often rehashed in sermons and even in popular songs such as “Alabaster Box.”

However, the woman in this passage isn’t named, indicating it likely wasn’t Mary Magdalene since Luke identifies her by name in another passage of his Gospel (Luke 8:2). Given that Luke was such a meticulous historian, it would have been out of character for him to leave this central character of a story unnamed if he knew her to be Mary.

Another assumed characterization of Mary Magdalene is that she was a former prostitute. While this could have been true, the Bible never makes this claim.

In Luke 8:2, we learn Mary Magdalene was delivered from seven demons. But neither Luke nor any other biblical author ever describes her as a former prostitute. This is an assumption that comes from an extrapolation of the text.

4. There will be no more sun and moon on the New Earth.

Some Christians believe there will be no sun or moon on the future Earth. This oft-repeated saying is drawn from Isaiah 60:19 and Revelation 21:23; 22:5.

A closer reading of these passages, however, reveals not that there will be an elimination of the sun and moon, but rather that their light will no longer be needed.

The point is not necessarily that God is going to remove celestial bodies from the vantage point of the New Earth, but that the radiance of Christ’s glory will outshine them—rendering their light unnecessary.

Note that the above passage from Isaiah also refers to Zion, a term for Jerusalem (Isaiah 60:14), while the passage from Revelation is specific to “the city” (the New Jerusalem). This would indicate that while the illumination of Christ’s glory will flow out of the New Jerusalem, it might not light the entire earth in a way that the sun and moon will be rendered completely obsolete.

5. David was the most righteous Old Testament king.

As a “man after God’s own heart,” David is often remembered as the Old Testament king who most closely displayed a righteous character. Of course, that includes some glaring exceptions, which include David:

These sins of David demonstrate the great chasm between the Lord’s righteousness and the character of one of the most esteemed earthly kings. But was David really the most righteous Old Testament monarch?

Maybe not. Instead, the Bible points to Hezekiah and Josiah—descendants of David—as two of most righteous Old Testament kings (see 2 Kings 18:5-6; 23:24-25).

The fact that both of these passages say of two different kings, “there was no other king like him, either before him or after him,” proves this to be hyperbole. Nevertheless, it does give high praise to these two Jewish rulers—providing David some heavy competition for the title of best Old Testament king.

6. There was only one boat on the water when Jesus calmed the storm.

Sunday School flannelgraphs and Bible storybooks often depict there being a single boat on the sea when Jesus calmed the wind and waves. But in the verse that immediately precedes the account of the windstorm, Mark writes:

“So they left the crowd and took him along since he was in the boat. And other boats were with him” (Mark 4:36).

The Gospel writers make a point to establish their credibility by stressing there were eyewitnesses to many of the events they chronicle. Mark’s inclusion of the detail that there were multiple boats on the water documents there were additional spectators to this miracle beyond just the 12 disciples.

7. Mary rode a donkey to Bethlehem.

Anyone who grew up reading this Little Golden Book, knows Mary traveled to Bethlehem on the back of a donkey. But the idea that Mary rode to Bethlehem is actually propagated more by Nativity sets than by Scripture.

The Bible merely says Mary and Joseph “went up” to Bethlehem (Luke 2:4-5). As a poor young couple, they might not have been able to afford the luxury of an animal transport, providing even more humble circumstances surrounding the Savior’s birth.

This is actually just one of many assumed beliefs people bring to the Christmas story. Check out these other Christmas urban legends:

God is in the details

You’ve likely heard it said, “The devil is in the details.” But according to Jesus—who said not the smallest letter will pass from His Word and who used a single verb tense from the Old Testament to settle a major theological dispute of His day—God scripted the Bible with meticulous care down to its finer points.

What other popular assumed, but possibly incorrect, Bible story elements have you discovered as you’ve made your way through Scripture? Let us know in the comments. 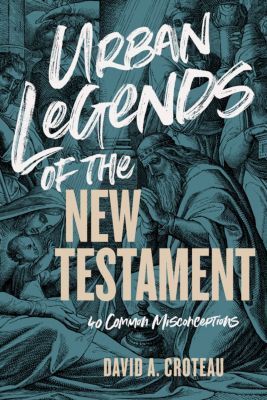