Christians around the world celebrate the birth of Jesus at Christmas, but how much do we really know about the biblical story?

In Urban Legends of the New Testament: 40 Common Misconceptions (B&H Academic), David Croteau explores and explains numerous misunderstandings of the Bible, including some from the Christmas narrative.

In previous Christmas Urban Legend post, Croteau examined the idea the traditional story of Mary and Joseph arriving at Bethlehem and whether Jesus was born in a stable and the legends surrounding the hymn “We Three Things of Orient Are.”

In this excerpt from the book, Croteau discusses the first visitors at the manger — the shepherds. Were they the societal and religious outcasts they are often presented as or were they simply lower class individuals who represent the poor and humble? The conclusion that shepherds were societal outcasts has been reached by many scholars, and they have repeated this concept over and over again. For example, Farrar said in 1893, “Shepherds at this time were a despised class.”

Strack and Billerbeck (1924) said, “The shepherds were despised people.” Stein (1992) said, “In general, shepherds were dishonest and unclean according to the standards of the law. They represent the outcasts and sinners for whom Jesus came.”

Butler (2000) said, “Shepherding had changed from a family business as in David’s time to a despised occupation.” Finally, Utley (2004) said, “The rabbis considered them to be religious outcasts and their testimony was not admissible in court.” Those are just a few quotes from scholars throughout the last 100 plus years.

Three main sources are used to reach this conclusion. First, Aristotle was cited as saying that among people, “the laziest are shepherds, who lead an idle life, and get their subsistence without trouble from tame animals; their flocks wandering from place to place in search of pasture, they are compelled to follow them, cultivating a sort of living farm.” Aristotle declared that shepherding is easy because of the animals involved.

Using Aristotle as background information for understanding Luke 2 has two main problems. First, Aristotle was not a Jew and did not live in Israel; he was a Greek and lived in Greece. His views on shepherding are virtually irrelevant for first-century Judaism.

Second, he lived more than 300 years before the birth of Christ. This also makes his view unhelpful for understanding the New Testament. He lived in a different culture, in a different society, during a different time period.

Scholars go to several sources for culling Jewish background material for the New Testament. The two main sources used for understanding shepherds in first-century Israel are the Mishnah and the Babylonian Talmud.

These traditions contained in the Mishnah can sometimes be useful for understanding the New Testament, depending on several factors (like the date of the rabbi being cited).

The Mishnah contains rabbinic debates over the correct interpretation and application of Old Testament Law, and the Talmud contains rabbis debating the content of the Mishnah. In general the information in the Talmud is not helpful for interpreting the New Testament.

Many of the quotations are simply too late to be reliably useful because the rabbis are so far removed from the first-century context.

Besides Aristotle, a comment by Philo, and one statement in the Mishnah, the bulk of the quotes used to demonstrate that shepherds were despised were taken from the Babylonian Talmud.

I was unable to find even one source from first-century Israel used to support the view that shepherds were societal outcasts. Therefore, this viewpoint is dated after the events being studied in Luke 2. It is unreliable information and should be discarded when interpreting the Gospels.

There is better evidence for the idea that shepherds were not viewed as societal outcasts: the overarching biblical portrayal of shepherds. The description of shepherds in the Old and New Testaments would be formative for the minds of first-century Jews and Christians.

Beginning in the Old Testament, Abraham was a shepherd. Genesis 13 describes him as having much livestock, herds, and flocks of sheep. Exodus 3:1 says Moses was a shepherd: “Meanwhile, Moses was shepherding the flock of his father-in-law Jethro.” David was a shepherd (according to 1 Samuel 17) who took care of his father’s flocks.

These three men are pillars of the Old Testament. Abraham, Moses, and David were all connected to shepherding, and all three were greatly esteemed in Jewish society.

God is also pictured as a shepherd in the Old Testament. One of the most famous verses in all of Scripture proclaims this: “The Lord is my shepherd” (Ps 23:1).

Genesis 49:24 says, “Yet his bow remained steady, and his strong arms were made agile by the hands of the Mighty One of Jacob, by the name of the Shepherd, the Rock of Israel.” Psalm 80:1 says, “Listen, Shepherd of Israel.”

The Lord speaks in Ezekiel 34:12, saying, “As a shepherd looks for his sheep on the day he is among his scattered flock, so I will look for My flock. I will rescue them from all the places where they have been scattered on a cloudy and dark day.”

Many more could be quoted, but these should suffice. A Jew in the first century would connect shepherding to Abraham, Moses, David, and God himself.

In the New Testament, Jesus is tightly connected to the shepherd motif. Matthew 2:6 describes Jesus as a shepherd: “And you, Bethlehem, in the land of Judah, are by no means least among the leaders of Judah: because out of you will come a leader who will shepherd My people Israel.”

If shepherds were viewed as societal outcasts, it is highly doubtful that Matthew would connect shepherding terminology to Jesus. He does it again in Matthew 26:31: “For it is written: I will strike the shepherd, and the sheep of the flock will be scattered.”

The most powerful passage connecting Jesus to the shepherd motif is John 10. Jesus discusses shepherding, and he places himself in the role of shepherd, calling himself “the good shepherd” (John 10:11).

This would be an oxymoron if shepherds were viewed like prostitutes. Jesus is even referred to as a shepherd outside of the Gospels (see Heb. 13:20; 1 Pet 2:25; 5:4). There is no hesitation in the New Testament to refer to Jesus as a shepherd.

Finally, church leaders are referred to as shepherds. In Acts 20:28, Paul explains that the overseers are “to shepherd the church of God.”

Peter says to church leaders, “Shepherd God’s flock among you” (1 Pet 5:2). The title “pastor” refers to a shepherd. There is no evidence of embarrassment over referring to church leaders as shepherds.

Many scholars have taught that shepherds were societal outcasts in first-century Israel. Their sources are generally many years after the New Testament time period, plus Aristotle who was from a different culture and 300 years before Jesus.

Luke 2:18 appears to lean against the view of shepherds as societal outcasts. The biblical portrayal of a shepherd is extremely positive in the Old and New Testaments.

DAVID CROTEAU (@dacroteau) is professor of New Testament and Greek in the Seminary and School of Ministry at Columbia International University. Excerpted from Urban Legends of the New Testament. Used by permission of B&H Publishing. 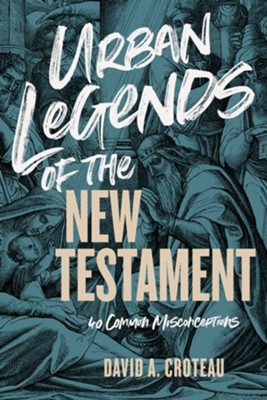