By Ben and Lynley Mandrell

How many spiritual explorers are dropping in on your church?

We’re referring to those never-seen-before faces, who perhaps sit in the back row. They didn’t grow up around the Bible and didn’t carry one coming in. These kinds of seekers have no idea what Moses, Ruth, or Elijah accomplished.

And they’re likely to panic because they feel intimidated, embarrassed, or even excluded when asked to turn to a particular passage in a Bible of which they have no knowledge.

But data tells us most people without a religious background aren’t showing up in our churches. This is a problem.

According to recent findings by LifeWay Research, 94% of today’s churchgoers grew up with a connection to the church. Let that sink in: Almost everyone listening to your sermons grew up going to church. We’re not reaching very far.

This means only 6% of churchgoing adults say they didn’t attend church as a child. Why aren’t we talking more about them—and the scores of other unchurched who are yet to be reached?

For years, evangelicals have shouted from the rooftops, sounding the alarm that the drop-out rate of young adults from the local church is increasing.

That conversation deserves our attention, as we design strategies to help our students own their faith before setting off for college or the workforce and face the smorgasbord of worldviews that will assault their hearts and minds.

Having said this, equal attention should be given to the fact that our non-religious friends aren’t showing up at our churches. The pastor is preaching to the choir most Sundays.

Last year, Pew Research findings showed that less than half of American adults say they regularly attend any religious services.

Unless something changes, the majority of Americans will grow up away from the church with little chance the church will reach them.

This list is certainly not exhaustive, but here are three strategies we, along with our church in Denver, Colorado, employed to reach people who are skeptical of Jesus and His followers.

There’s a reason C.S. Lewis wrote children’s novels: He believed story was the best way to impart truth into the heart. But he also saw the fertile, soft soil of a child’s soul.

Kids are normally far more interested in God than adults are. If your church has a strategy of reaching non-religious families, it seems wise to focus first on reaching children.

When we moved to Denver to launch our church, we were pleasantly surprised to see 65 people uproot and move with us. Half of the launch team were children, and they proved to be amazing evangelists.

Kids invite their friends to fun activities. Whenever we planned a block party or outdoor movie, we encouraged families to involve their kids in engaging their peers.

There would be no awkward, surprising gospel presentation at the end of the night. The purpose of the event was to provide free fun and to build friendships.

The only announcement would be a soft invitation to a next-level event (a marriage class, a women’s gathering, or a men’s outing).

As kids brought their parents to such events, the guests could see that Christians are normal people who enjoy authentic community. In secular cities, people normally embrace Christian community long before they embrace the Christian faith for themselves.

Bottom line: Create a series of fun events for kids and challenge the children in your church to invite their friends. You might be surprised who shows up.

2. Build a culture of neighboring.

In our church, we often said, “Invite people into your life, not to a location.” Of course, the end-goal was to see lives transformed by the gospel. But we recognized the journey for most non-religious people was gradual.

Those who were saved normally testified to the runway required and the relationships that were instrumental in their newfound faith.

Putting evangelism on the calendar in hard-to-reach places is highly ineffective. Utilizing mission teams that arrive with a passion for confrontational evangelism is pressurized for the evangelist.

A far better strategy for reaching today’s non-religious crowd is to bake what we call “neighboring” into the DNA of the church.

Our church staff meetings often began by the two of us sharing a story of an intentional relationship we were building with new, non-believing friends. We couldn’t control outcomes, but we could control effort.

We celebrated purposeful relationships and prayed as a staff for specific people we longed to see in our weekend services.

In the COVID-19 world we now live in, there’s never been a better time to push your church toward a neighboring mentality.

Challenge everyone in your congregation to draw a map of their street and begin filling in the names of the people who live in each house. Push them to pray for those families and individuals by name.

As Christians take on the mindset of living like a missionary on their street, they’ll start to enjoy evangelism rather than being intimidated by it. When evangelism is everyone’s job in the local church, the number of lives touched by the gospel will multiply.

3. Preach as if half the room is brand new to the Bible.

Before our non-religious neighbors began dropping into church services, I (Ben) hadn’t given much effort to making the Bible understandable to those who had grown up far from church and with a lack of knowledge about Scripture.

But from the moment our unchurched friends started showing up on Sundays, the sole aim of my preaching was to make the metanarrative of Scripture crystal clear to the first-timer. Every sermon mattered, and the words and tone I used were critical.

As a preacher begins to show increased sensitivity to the spiritual explorer, church members gain increasing confidence in bringing their non-religious friends to a service.

Any good-hearted person in your church would want their secular neighbor to have a pleasant experience at a church.

The harder the pastor works to make the Bible understandable, the more likely people will invite their friends.

A few principles I (Ben) followed:

Fortunately, we’ve seen data that gives us hope: LifeWay Research found that 79% of unchurched Americans say they don’t mind talking about issues of faith with a friend. Yet, only about a third (35%) say someone has ever explained the benefits of being a Christian to them.

The field is ripe for harvest. And so are our neighborhoods, workplaces, gyms, and schools. We’ve been placed in the world for such a time as this. Let’s steward our lives and ministries well by inviting people into them.

Reaching non-religious people will require some major shifts in our mindset. Let’s pray together that God will give us a burden for both church drop-outs and drop-ins.

BEN MANDRELL (@BenMandrell) is the president and CEO of LifeWay Christian Resources. LYNLEY MANDRELL is the wife of Ben Mandrell. Before coming to LifeWay, Ben and Lynley spent five years in Denver, Colorado, planting a church designed to reach the unchurched. They are the parents of four and live just outside of Nashville, Tennessee. 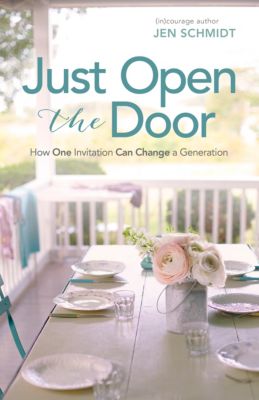 Just Open the Door: How One Invitation Can Change a Generation

Previous Post: « 3 Priorities for the Church During This Election Season
Next Post: 4 Ways Social Media Can Be Leveraged for Discipleship »