Do a quick internet search for articles about pastors and quitting, and you’ll find several readily available and from a diversity of angles.

Some articles give the impression that pastors are quitting at alarming rates (though the research says otherwise). Others encourage pastors to not give up.

And, perhaps surprisingly, there are even some who encourage pastors to considering quitting.

I want to encourage you to press on if you still feel the Lord has called you to your present post and vocation.

I’ll begin with an explanation of my italicized statement before offering three motivations to help you press on in the pastorate.

First, why the italics?

Pastors have long discussed the idea of calling. We talk about our call to ministry and our calling to this church or that ministerial role.

We even have books that help us think carefully about the call to vocational ministry. I want to lean into that idea on the front end.

Basically, I want to encourage you to press on in your pastoral role only if you are still called to do what you’re doing.

The reason I’m starting here is because I don’t think the call to vocational ministry is necessarily for life.

God may call you to vocational ministry for a season and then, according to His sovereign plan and purposes, lead you into another vocation in the future.

Yes, I know, the calling of God is irrevocable (Romans 11:29). But in Romans, Paul is talking about God’s purposes for ethnic Israel, not whether or not He could remove the desire for pastoral ministry in your life or mine. It has happened before.

Some have been called to the pastorate for a time only to have God later call them to another work. If that is what you’re feeling in this season, own it.

God knows what He is doing. His plans are good (and for your good). Following Him into the future, whatever that might look like, is the pathway to everlasting joy.

In these strange and stressful days, I think it’s good to step back and reflect on your calling. Do you still desire to serve as an elder/pastor? That’s a noble calling (1 Timothy 3:1).

Make sure the calling is still clear to you, your family, and your church. If that desire is still burning, and God is still leading you to shepherd his sheep, then press on.

Here are three motivational ideas that have helped keep me going and may, in turn, help you.

1. The Need for Healthy Churches

Press on in your calling so that you can help establish healthy churches in your area. The blood-bought Bride of Christ needs courageous and competent leaders.

If God has called you to lead, then He plans to use you for the good of His people.

Don’t shrink back. Lead your church. Preach the Bible. Teach the Scriptures over coffee, in the classroom or from your computer screen (via video or written word!).

In all your efforts, press on so that the church is built up in the faith. Keep going in order to present God’s people “mature in Christ” (Colossians 1:28).

2. The Urgency of the Gospel

Brothers, if God has called you to shepherd, then do so in such a way that you spread the saving message of Jesus Christ.

Point people to the gospel every chance you get. Gospelize the church. Help Jesus’ people become saturated with the gospel, down deep into their bones.

This is an urgent need. The church needs pastors who will take them further into the depths of the gospel, making sure they never drift from Jesus (cf. Galatians 1:6).

And the church needs a lead spreader. They need a pastor who puts on display a Great Commission life (Matthew 28:18–20). If the calling still burns within, take up the blood-soaked mantle of the gospel and march on.

Lastly, if Christ has called you to care for His people, seek to serve them. Press on, dear friend, because the people of Jesus need someone to love them and serve them like Jesus.

Now, Jesus has ascended to the right hand of the Father. Who did He leave here to tangibly serve his church? He left shepherds.

He called you and others to lean in and serve. The people need servants. Let us tackle the task.

Take some time to step back and evaluate your calling. If God is leading you to do something else and these pandemic days are what He’s using to make that clear, then so be it. Wherever He leads, we’ll go (as the old song says).

There’s no shame in surrendering to God’s plan, even if that means doing something different in the days ahead. Yet, if the call to pastoral ministry is still clear, then press on. Press on so that more and more healthy churches dot this land.

Keep moving forward, taking people into the depths of the gospel of Jesus. Press on in service to the blood-bought people of Christ. Press on in the pastorate, until Christ returns, calls you home or calls you to something else.

JONATHON WOODYARD (@jonwoodyard) currently serves as the lead pastor of Northfield Community Church in Northfield, Minnesota, a plant out of Bethlehem Baptist Church. He’s the general editor of Before We Forget: Reflections from New and Seasoned Pastor on Enduring Ministry. 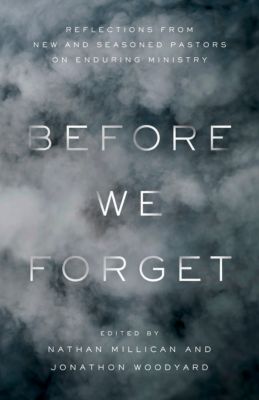 Before We Forget: Reflections from New and Seasoned Pastors on Enduring Ministry