At age 27, I began an unplanned pivot in ministry.

I was serving as the college pastor at a fairly large church in West Tennessee. The senior pastor, Phil, had been leading that church for more than 20 years and was widely known as a loving shepherd.

To my surprise, Phil began calling on me to preach in his absence. Over the course of time, the occasional Sunday pinch-hit morphed into an “assistant to the pastor” role that involved a wide variety of ministry duties.

Sometimes being in this role meant I attended a funeral with him and received instruction on how to comfort a family in distress and where to stand at the graveside service.

Other times it meant sitting in on heated discussions with disgruntled custodial staff or leading a sub-team that would design a new program.

This journey with Pastor Phil was a crash course in pastoral ministry, and it had all the feeling and intensity of a medical residency.

This was a formative season in my life and ministry, and it’s one I’m grateful to have had. But leadership is lonely for many pastors—most haven’t had this kind of mentorship.

According to LifeWay Research, 1 in 3 pastors feel isolated in ministry.

Most people in the pews will never understand the emotional and spiritual toll of creating and delivering an inspiring message each week—let alone the angst of navigating the Monday-through-Saturday challenges of the pastorate.

In that same LifeWay Research study, nearly half (48%) of the pastors indicated that they feel the demands of ministry are more than they can handle. More than half (54%) said the role of pastor is frequently overwhelming.

I suspect these numbers are even higher among the less experienced pastors. As president of LifeWay, I get the opportunity to talk with young shepherds, many of whom express these thoughts and emotions.

How can pastors gain the encouragement they need when their batteries—and their morale—run low?

One solution is found in mentoring. Every leader needs a mentor who has walked through tumultuous times in ministry—like the pain of a potential (or actual) church split, the recurrence of a worship war, or a mean-spirited staff member.

There are real issues that can surprise a rookie pastor. In a mentoring relationship, a novice leader can process the painful decisions with their mentor and work through emotions in a healthy way.

I think it’s wise for every young pastor to seek out a seasoned mentor with whom they can regularly meet for coffee and emotional downloading. Here are three reasons why.

There are mentoring relationships shown in Scripture from which we can get a framework.

Moses prepared Joshua to receive the baton of leadership over the Israelite tribes. Elisha was a willing protégé who forfeited the life he had established because he trusted the leadership of his mentor, Elijah.

Barnabas actively sought out Paul’s mentorship in teaching the believers at Antioch.

When Paul challenged a discouraged Timothy to “fan into flame the gift of God” that was within him (see 2 Timothy 1:6), he was pushing Timothy to rise up and be the leader God called him to be.

And then, of course, we see Jesus and His 12 disciples. They received on-the-job coaching from the Master before they were told to go out and lead. This up-close training with Jesus was more valuable than seminary.

One of my favorite memories of serving with Phil were the afternoon drives to weddings, funerals, or pastor events.

We would chase a thousand rabbits as we rode along, and we quickly developed a warm rhythm of swapping stories. In some weird way, I began to feel like he was getting as much out of the relationship as I was.

I was able to fill in some blanks on the future trends of the local church, while he provided me with a constant stream of church history.

I really loved hearing his greatest hits album of pastor stories. We were a great team. I wish every young leader could experience that kind of dynamic.

The most astounding part of my story is what happened during an eventual leadership transition. As Phil began to look toward retirement, the church deacons approached me about taking the baton of leadership.

It was recommended to the church that Phil would remain on staff to cover pastoral care, and I would enter into the cockpit of his office and assume church leadership. The congregation affirmed these recommendations.

The whole process worked seamlessly; I felt deeply supported by him, and he felt honored by me and the church body. It was truly a Moses-to-Joshua kind of experience.

As I took the helm of senior pastor, Phil and I remained friends though our relationship began to change.

He was not as hands-on as he once was, but he remained available to help me understand the context of decisions that were made or the politics involved in making a decision.

I thrived with Phil on staff in my early years of the senior pastorate. Mainly because he continued to cheer me on and demonstrated that he had my back.

A charge to both the novice and the seasoned leader

Perhaps you’re only a few years into your leadership role and feeling in over your head.

The added stress of COVID-19 has likely fueled your feelings of burnout. If this is you, seek out an older leader who has been there—one who would count it joy to pour into you.

Also, if you’re seasoned in ministry, you may be the “Paul” a young “Timothy” is praying for and seeking. Will you share the hard-earned wisdom that comes from a lifetime of service?

The future of the church is in the hands of the younger leaders.

Whether you’re relatively new in ministry or you’ve seen ups and downs through decades of church leadership, your ministry to one another is critical for future generations to be reached and discipled to the glory of God. 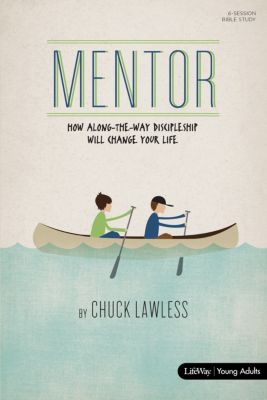 Mentor: How Along-the-Way Discipleship Can Change Your Life

Previous Post: « God Provides Through the Miraculous and the Mundane
Next Post: 6 Truths to Prepare the Church for a Post-Christian America »