When asked their most significant struggle in this moment, pastors pointed to the disunity in their congregation.

Think about that for a moment.

Pastors are dealing with a once-in-a-lifetime pandemic that has radically altered how most congregations are gathering. The coronavirus has impacted every facet of pastoral ministry.

In the midst of all of that upheaval, pastors are most worried about their churches being divided.

So, what is causing the division?

Pastors say that churchgoers have vastly different perspectives on handling the pandemic.

“Some are scared to death, while others are convinced it’s a hoax,” said one pastor. “Trying to minister to both ends of the spectrum is exhausting.”

Clearly, the COVID-19 pandemic has exposed and compounded issues that are present within our culture, including the church.

But Christians have disagreed on issues since the founding of our faith. Read Acts and Paul’s letters to those first congregations to get a feel for those divisions.

In one sense, this is nothing new. Jesus knew unity among Christians would be important, so much so that He devoted time in prayer to the topic the night before His crucifixion.

In what has become known as the “High Priestly Prayer” (John 17), Jesus asks His Father to bring unity to all those who will come to believe in His message.

The unity of Christians with each other is to be a witness to Jesus’ unity with the Father. But pastors say they are experiencing anything but unity right now. What’s happening?

Many factors no doubt play a role in this problem, but one statistic may underscore a significant contributor to our current division.

The irony of social media is that it was pitched as a way for us to stay connected with those with love, but in reality, social media has worked to keep us connected to the app by stoking anger at those we love and those we’ve never met.

Social media apps intentionally amplify the most extreme voices because they’re the ones most likely to generate a response.

Facebook, and every other social media platform, is attempting to manipulate users through the bait most likely to generate a response.

For many, social media has not made us more social; it has made us more anti-social, angrier, and more divided.

Despite this, we spend more time reading the half-considered musings of other people on Facebook than we do in study of God’s divinely inspired Word.

Among evangelicals by belief, 66% say they use Facebook at least about once a day, including 49% who say they’re on several times a day.

Around 2 in 5 evangelicals (39%) watch a YouTube video at least about once a day.

These statistics are not problems in and of themselves.

You can use social media to be informed and challenged. While it takes effort, social media can be a place of evangelistic opportunities with non-Christians and encouraging moments of growth with Christians.

The inherent problems, however, are exacerbated by the fact that many Christians are being shaped more by social media than Scripture.

In the same study that looked at social media usage, LifeWay Research found 32% of evangelicals by belief in the U.S. say they read the Bible every day.

This is not among those who simply self-identify as evangelicals. This is among those who say they strongly agree with four key doctrinal statements, one of which says: “The Bible is the highest authority for what I believe.”

Among Christians who assert the Bible as their highest authority, only a third say they spend time reading it every day.

Another LifeWay Research survey of Protestant churchgoers, those who attend church services at least once a month, found similarly 32% say they read the Bible every day.

Studies by LifeWay Research and others continually demonstrate Bible reading and study have more impact on our spiritual health and maturity than any other factor.

Is it any wonder then, that churches are unhealthy and divided with Christians gorging on social media fast food and skipping feasts of the Bible?

Church leaders don’t necessarily need to convince their people to completely give up social media apps like Facebook and Twitter, but they should encourage them to make sure they spend at least as much time in books of the Bible like Philemon and Titus.

A congregation more saturated in Scripture than social media will lead to a more spiritually mature and less divided church. 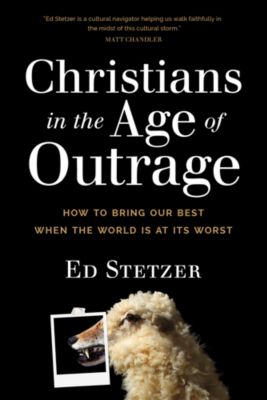 Christians in the Age of Outrage: How to Bring Our Best When the World Is at Its Worst

Previous Post: « 3 Needs Student Ministers Have of Their Senior Pastors
Next Post: Feeling Called to a New Ministry Assignment? Take These 3 Steps »