Single-image, random-dot stereograms were all the rage in the 1990s. In case you’re wondering what those are, you may know them by the more common name, Magic Eye pictures.

These pictures required you to squint or cross your eyes to see the image behind the repetitive colored patterns that served as the front of the picture.

I was never any good at seeing the image behind the image in these Magic Eye pictures.

The frustration was endless unless someone pointed out what I should be looking for. Only then was I able to see the picture. Once I knew what should be in view, I could see the whole picture more clearly.

1. Study Acts with an eye toward the Gospel of Luke.

What sometimes gets lost in a study of the book of Acts is that it’s part two of a two-volume series. Luke authors both the Gospel of Luke and the book of Acts. The recipient of both Luke and Acts is the same individual: Theophilus.

Further, in the purpose statement for the book of Acts (Acts 1:1-3), Luke highlights the way these two volumes are connected. When we miss the relationship between the Gospel of Luke and the book of Acts it limits our view of Acts.

2. Study Acts with an eye toward geography.

In some sense, the book of Acts has a geographical outline. The stories in Acts are based in Jerusalem and then move out from there. Through persecution, the church moves beyond the city of Jerusalem and into Judea.

Yet, God’s design is much bigger than the area that encompasses the geographical region of Judea. So, the gospel moves into Samaria.

Through both persecution and evangelism, the gospel expands into Gentile cities and towns until finally, at the end of Acts, Paul presents the gospel in Rome.

While we’re prone to neglect geography when it comes to Bible study, doing so in Acts misses the panoramic way the gospel goes forth in the days of the early church.

3. Study Acts with an eye toward key characters.

Just as the book of Acts shows geographical movement, it also shows individual movement. The book of Acts opens with the ascension of Jesus and His instructions to wait in Jerusalem for the Holy Spirit.

When the Holy Spirit falls, Peter is the spokesperson for the apostles and garners most of the attention over the next few chapters.

However, as the church moves out geographically the focus shifts from Jews to Gentiles and from Peter to Paul. In fact, Paul and his missionary journeys serve as the backdrop for the last half of Acts.

Along the way through Acts, we meet men like Stephen and Phillip. We’re introduced to Paul’s travel team of Barnabas, John Mark, Silas, Timothy, and even Luke himself.

The husband and wife discipleship team of Priscilla and Aquila spent time with Apollos helping him understand the “way of God more accurately” (Acts 18:24-26).

Apollos will go on to become instrumental in the early expansion of Christianity. James, the half-brother of Jesus, is a key leader in the Jerusalem church. His influence and authority in the church can be seen in the Jerusalem Council (Acts 15).

There’s no shortage of characters to study as you read through the book of Acts. Limiting your view to just Peter and Paul gives you only a two-dimensional perspective of Acts.

4. Study Acts with an eye toward the Old Testament Prophets.

At key places in the book of Acts, the writings of the Old Testament prophets play a significant role.

In Acts 2, Peter uses Joel 2:28-32 to make the connection between the coming of the Holy Spirit and the Old Testament concept of the Day of the Lord as it’s found in Joel’s prophecy.

Similarly, as the gospel expands beyond Jewish boundaries the writings of the Old Testament prophets are crucial. It’s the work of Isaiah that instructs and informs the Ethiopian eunuch (Acts 8:26-40).

When the church holds its first conference, the Jerusalem Council, the focus is on the rise of Gentiles who are professing faith in Jesus as the Messiah.

James, the final speaker at the council, points to the writing of Amos and shows that the kingdom of God is intended to be bigger than just Israel and Judah (Amos 9:11-12; Isaiah 45:21).

The historical accounts Luke records in Acts run much deeper than just the New Testament. If we fail to keep the Old Testament prophets in our sight lines, we’ll have a narrow view of the book of Acts.

5. Study Acts with an eye toward ethnic expansion.

As the gospel expands in the book of Acts it does so regardless of ethnicity. No passage in Acts demonstrates this better than Acts 13:1. This verse reads like the leadership page on the website for the church at Antioch.

It lists Barnabas, Simeon who was called Niger, Lucius of Cyrene, Manaen, a close friend of Herod the tetrarch, and Saul as the prophets and teachers in this body of believers.

This church was amazingly heterogeneous. It included Barnabas, a native of Cyprus, and a black man named Simeon (his other name, ‘Niger,’ is Latin for ‘black’). Another Gentile named Lucius may also have been black because he was from Cyrene or North Africa. Also in this church was Manaen, who had been reared as part of King Herod’s household. Finally, there was Rabbi Saul.”

What makes this ethnic diversity even more significant is that, according to Acts 11:26, “The disciples were first called Christians at Antioch.” The Christ-people of Antioch were a racial-diverse group of believers.

The power of the gospel in Acts overwhelms the barriers of culture and race so that one’s perspective of these early Christ-followers includes racial diversity.

Seeing these five sight lines will go a long way in helping us view the panoramic picture of the church that Luke has recorded for us in the book of Acts.

CHRIS HULSHOF (@US_EH) is an associate professor for Liberty University’s Rawlings School of Divinity where he teaches Old Testament Survey, Inductive Bible Study, and Theology of Suffering and Disability. You can study the Bible with Chris on Instagram @VisualBibleStudy. 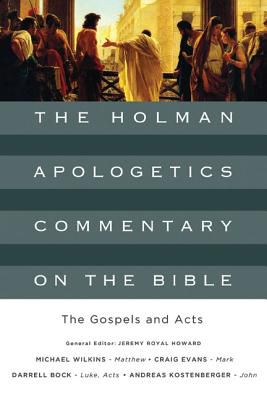 The Holman Apologetics Commentary On the Bible

The Gospels and Acts

Previous Post: « What Should Churches Do Now that COVID-19 Is Spiking Again?
Next Post: Study: Churches Gathering Again But With Precautions »