A few years ago, pastor Dhati Lewis said something at a church planter’s conference that stopped me in my tracks: “Authenticity is the apologetic of our day.” That phrase has stayed with me ever since.

The longer I live and serve in ministry, the more that phrase rings true. The way to get people’s attention today is to be honest about our own failures and not try to peddle perfection. The gospel is where Christ’s grace meets our need.

If we’re always the hero of the story when we’re preaching or if we’re telling stories about other people, but it doesn’t intersect with us, we’re not displaying authenticity. And this doesn’t only involve preaching; it involves where we lead our staff.

Authenticity should be a defining mark of pastoral leadership. And practicing authenticity is caught, not taught. What are some specific things church leaders or pastors can model for their congregation that can be caught?

Before we talk about practical steps to creating a culture of authenticity in your church, let’s make a few observations.

We all know who we are in private. Outside of that there’s a force field around our lives that’s what some of us might call the “social media me,” the “pulpit me,” the “seminary me,” and so on. It’s the person we want people to see as we project what we want them to believe about us.

Pastors often think success looks like running the perfect staff meeting or leading a church that grows exponentially. But sometimes success is going into that staff meeting and saying, “Hey, can I let you guys in some of the battles raging in my heart?”

Or, “I got this criticism on Sunday after my sermon that’s totally taken over my inner life, and I’m dealing with that because it’s a pride issue.”

Effective preaching is when you’re talking and people think, I’m glad I’m not the only one.

People are drawn to an honest approach and not to the person trying to stand on the mountain top and tell them how to get up here. As long as we’re all swimming through the mess of our lives together, there’s a sense of community in that.

If you want to change the culture in your church, start with yourself. Then, as you’re working out your salvation through authenticity, your church can then be led by example to reach their neighbors, family members, friends, and coworkers this way.

Here are a few simple things you can do to communicate and practice authenticity in your leadership—whether you’re preaching a sermon, leading a meeting, or having a one-on-one conversation.

Give people your full attention during a conversation.

Avoid the temptation to look over someone’s shoulder as they’re speaking. As far as you’re concerned, they’re the most important thing for that moment.

People quickly pick up on it when your eyes are scanning the room to see if there’s someone “more important” you’d rather be talking with. Don’t “shoulder surf.”

Talk about people the same way privately as you would publicly.

If absolutely necessary, there are ways to discuss someone’s weaknesses in a godly way that treats them with dignity. If your conversations—especially about people—were recorded, would you be ashamed of what you say?

Anytime we’re on the phone talking about somebody who’s not in the room, it’s important to be careful to protect their name and reputation.

I think the way pastors speak about people who aren’t in the room speaks a lot about the character that will cause people to trust or not trust them—and the Church at large.

Preach in a way that’s consistent with your personality.

I’ve seen pastors actually use a different voice when they speak than they do in conversation.

It’s almost like they’ve taken on an alter ego. They shout while delivering a sermon, but are soft-spoken in person.

In these situations, I think to myself: I wonder why someone doesn’t tell him that he does that?

This makes a person appear duplicitous. It’s important to be self-aware if you’re not being authentic to your God-wired personality when you preach and interact with people.

Consider having a group of people in the church to help you perceive how you’re coming across.

When it comes to hot-button issues, there’s always pressure for pastors to be able to address those things, or to have the courage to bring them up.

In fact, I’ve seen research that suggests some people are leaving the church because they don’t feel the leadership is willing to address real issues.

It’s important to address issues in a way that shows kindness to those who disagree. When we have a culture that has such intense rhetoric, it’s more important than ever that we deal gently.

We may land in a different place on an issue from someone, but it doesn’t mean we don’t still have relationships with them.

This is no easy feat, especially in our politically charged climate. Yet, when we’re addressing a hot-button issue, we must identify its gospel implications. What does Scripture say about it?

It’s important to address those things, but it’s also important to stay tethered to things in which the gospel unites us.

Don’t skip uncomfortable or difficult texts in your preaching.

Authenticity as a preacher means we teach the whole counsel of God.

I think where some pastors get themselves in trouble is they lack self-awareness enough to realize they’re preaching the same message in a different part of the Bible every week rather than letting the text drive the conversation.

Authenticity acknowledges that you really wish you didn’t have to preach on this because it’s a tough subject. But then you read the text and say, “But we have to deal with it because it’s in the text.”

In my experience, people appreciate when pastors don’t dodge the issues and when we handle them with as much gentleness and care as we can—when we’re not trying to make the Bible say something it doesn’t say.

We’re called to lead by example, so you can show your areas of weakness or areas where you weren’t successful. But it’s also important to demonstrate what it is to victoriously walk through weakness.

We can walk in authenticity over time with those we lead—both on our church staff and the people in our congregations. But through our preaching, we can also model authenticity to our communities that starve for truth and love. 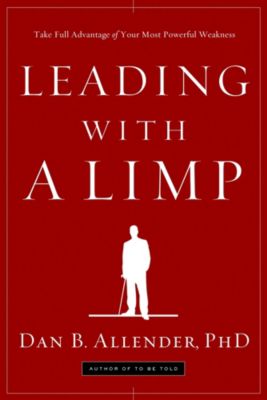 Leading with a Limp: Take Full Advantage of Your Most Powerful Weakness