Photo by Nathalia Segato on Unsplash

According to the Bible, two things on Earth will go beyond the grave: the words of God and the souls of people.

Those two things, however, are rarely talked about in Denver, Colorado, the city where I planted a church, Storyline Fellowship, and lived for five years.

While I was in Denver, the Lord began to lay on my heart a burden to reach the unreached by going beyond the pulpit and living day in, day out in my neighborhood. In order to do that, there was much I needed to understand about my literal neighbors.

Let me share three things I learned about non-religious people while planting a church:

1. They think most of what we Christians do is weird.

Non-religious people don’t understand our strange behavior. In the book, I Once Was Lost, author Doug Schaupp shares the story of he and a group of Christian friends who decided to be a witness at their secular university in the West.

On the high-traffic lawn of the campus, they formed a circle. They held guitars and sang praise songs as their postmodern peers walked to class. What better way to witness than with bold worship?

But the non-religious students seemed to be turned off by it. Here’s what Doug writes, looking back on that day:

“We came up with our evangelistic strategy while we were alone in a room together with a bunch of Christians. Not once in our brainstorming did we ask where our non-Christian fellow students were coming from. Not once did we try to find out what they might need to take a step toward Jesus.”

What makes you appealing to a non-religious person is not your religion. It’s the relationship you offer them. Genuine friendship is never weird.

2. They’ll listen once they feel loved.

Whether we like it or not, unbelievers think Christians are judgmental. We’re perceived as always looking down our noses at their parties and their purchases. Nonreligious people write us off.

In Denver, we became close friends with some of the non-churchgoing crowd on our street, but it took a long time to earn their trust. After we had lived there for a few months, one of the neighborhood ladies told my wife Lynley: “You’ve passed my test. We can be friends now.”

“I didn’t know there was a test,” Lynley said.

The neighbor replied: “Yep, I decided I was going to give you six weeks to judge me. You haven’t done that. We can be friends now.”

When we launched Storyline, we learned that spending quality time with nonreligious people is the best way to influence them. Now, I can already hear the objection: “But hanging out with people doesn’t get them into heaven! You have to confront them with the gospel, and the gospel is offensive.”

Sharing the message of Christ is essential for seeing lives changed, but friendship opens that door like nothing else. I’m learning I have to love people before they will listen to me.

3. Kids are the most effective evangelists.

When we moved to Denver, we had about 65 people move with us. I used to provide the disclaimer, “But about half of them were kids.” It was as if I were saying: “There were only 30 ‘useful’ people; the rest were just kids.”

I have since repented of such statements. When kids invite kids to church, those kids invite their parents. It’s a package deal.

One of the neighborhood boys came to our summer kids camp. He had never been to a church before, and he was thrown into the world of games, crafts, skits, and songs about Jesus. He came home and asked his parents, “Who is Jesus?”

His dad caught me in the front yard and said, “Hey, my son came home from your church deal, and he’s asking me all kinds of questions I don’t have the answers to. What am I supposed to do about that?”

Suddenly we were able to have a spiritual conversation because a kid made Christ an issue with his father, when I could not find a way in.

Young people have a hunger for God, and they share it with their parents. We pastors think all week on how we can influence those in the congregation, but that’s the hardest group in the church.

If we want to reach non-religious people, we have to reach their kids.

Here are some specific ways we trained our people in Denver to reach their neighbors—to be the resident pastors on their streets and apartment complexes.

1. Learn the names of your neighbors, including their kids’ names.

The Bible says we should practice hospitality. That word means “to welcome strangers.” Who on your street is still a stranger, and how can you change that?

It’s as simple as stopping your car when they’re out in the yard. Getting out, walking over, smiling, and saying, “I’d really like to meet you. I live just five doors down, and we’ve never had a conversation. My name is Ben.”

Evangelism begins by learning a person’s name. In their book, The Art of Neighboring, Dave Runyon and Jay Pathak, write:

“When Jesus was asked to reduce everything in the Bible to one command, he said: Love God with everything you have and love your neighbor as yourself. What if he meant that we should love our actual neighbors?…The reality is, the majority of Christians don’t even know the names of most of their neighbors.”

Start with their names. Draw a sketch of your street and start filling in the names of the people who live around you. You’ll be amazed how God will use that to stir your heart for them.

2. Start praying for a few of those people by name.

A few of your neighbors will take first place in your heart. Start lifting up their names to God. Simply speaking their names to the Father will increase your passion to serve them.

You’re probably the only person on the planet praying they would come to know Christ in a life-changing way.

3. Have those people into your home for dinner. And make it fun.

There’s something about sharing a meal together that changes everything.

We have a set of “get to know you” questions. When we have people over for dinner, we all sit at one big table, and I start the dinner by saying: “Everybody here has to answer one question—including the kids. And these are important questions!”

I draw a card, look at the first kid, and say: “What’s best thing to put on ice cream?” And the conversation takes off from there. Our kids know that when we invite people into our home we have fun with them—all kinds of people, not just church people.

I wonder how many of us are having unchurched people over to our homes for dinner? 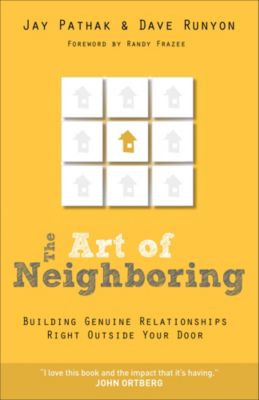 The Art of Neighboring: Building Genuine Relationships Right Outside Your Door