Photo by Alexis Brown on Unsplash

There’s an unfortunate and unbiblical dichotomy that exists in much of the church in America today.

In most cases, this dichotomy doesn’t exist in doctrine, but in practice. This is the dichotomy of evangelism and discipleship.

Sadly, churches often emphasize or focus on one of the two at the expense of the other.

They either drive hard toward being a church that reaches people who are far from God, or they concentrate on the growth of those within the church who already know the Lord.

Rare is the church that has a biblical attitude and approach toward both.

Using both pedals to gain momentum

I have five young kids, four of whom are at bike-riding age. Because of this, I’ve had to become a low-level bike mechanic, and I also regret not buying stock in the Band-Aid company.

But watching my kids ride their bikes has provided an analogy for what I believe is the right biblical approach to both discipleship and evangelism.

As my kids ride their bikes, it’s essential they have both feet firmly planted on the two pedals. If they only try to push one pedal, they might get the wheel to spin a little, and they may even get some forward motion.

But ultimately, they won’t go very fast or get very far. Not only that, the more they try to push only one pedal, the more wobbly they’ll get because of the lack of balance in the force being applied.

Churches are similar: We’ve heard of that church or ministry that grows extremely rapidly, with reports of many new converts and a shockwave of excitement.

They’re pedaling hard on the evangelism side, and that’s wonderful! But in so many of those cases, unless there’s also a sustained push from the discipleship side, it will prove to be a flash in the pan.

I saw this for a brief period in the student ministry at one church I attended. They had a huge push for evangelism and had a major response from the local high school, with a large group of football players claiming Christ.

These guys showed up for a few Wednesday night services, and we thought revival had broken out! But within weeks, they were gone. It was a result of evangelism with little actual discipleship.

On the other hand, years ago I observed the Lord bring a church to greater health and depth through a pastor friend of mine who recognized the one-pedal problem.

He was an associate pastor at a large church that had experienced meteoric growth under a previous leader who ultimately had a moral failure.

In the wake of this event, my friend suddenly became the lead pastor. This church had reached many new believers, but my friend came to realize their discipleship was severely lacking.

To his credit, he said to me and some other pastors in a prayer meeting, “Our church really has a grace culture, but what we need now is a holiness and righteousness culture.”

He began to focus on the discipleship side in his leadership and staff hiring, and the Lord is doing an amazing work through that church.

Now they not only have a strong discipleship culture, but are also reaching many new believers again!

But there are many churches that make the opposite mistake: They pedal hard on the discipleship side, to the neglect of the evangelism side.

As a result, they fail to move forward in reaching their community and they wobble through an unhealthy imbalance of inward focus.

Many congregations choose to stay small and sometimes even wear it as a badge of honor, holding to their extra-biblical traditions over reaching people.

They might call their doctrine and teaching “deep,” but it’s often a smokescreen for being unrelatable and unevangelistic.

They focus on internal meetings and schedules and programs instead of looking at their communities and figuring out how they can really engage in all the places where God has placed their members.

The reality is this: evangelism and discipleship are really two parts of the same charge that we’re called to in the Great Commission under the banner of “make disciples.”

We aren’t called to simply make converts, but to make disciples.

The Great Commission tells us to baptize—a direct result of evangelism—as well as to teach new believers to obey Jesus’ commands—clearly a call to disciple.

If we’re doing both of these faithfully, they actually feed into each other, thereby causing the bicycle wheel to spin faster, creating a healthy balance and moving the church forward in her mission.

Evangelism leads to new converts, who then need to be discipled. Those new disciples should be taught to share the gospel as part of their Christian life, which feeds back into evangelism.

The wheel spins faster, and excitement grows as we see the real results of the gospel take hold in people’s lives and in our communities.

In his letters, Paul addressed the imbalance that occurs when the church pushes one pedal and not the other. He did so especially in 1 Corinthians, with all the various problems and factions that church had.

In 1 Corinthians 3, he tells them it’s time to push past being on milk and to move toward solid food through deeper discipleship.

In 1 Corinthians 5, he chastises the church for allowing—and even flaunting—the presence of incest in their midst.

They’ve had converts, but these converts had brought the rampant immorality of Corinth into the church and were being encouraged in this immorality rather than discipled away from it!

But Paul also addresses those who might allow their application of doctrine and focus on discipleship to keep them from reaching people. In 1 Corinthians 9, Paul asserts it’s doctrinally true that he could be paid by the church for his efforts.

He even references Old Testament teaching on the topic in verse 9. But then in verses 19-23, he explains he has laid aside his claim to that payment. Why? “So that I may by every possible means save some” (verse 22).

He holds to true teaching, but he doesn’t use it to avoid evangelism. He doesn’t claim to have “deep” teaching while ignoring lostness around him.

He’s balanced and moving forward in the mission, pedaling for both evangelism and discipleship.

Pastors can take three practical steps to help their churches move toward health in this area:

1. Preach and teach toward both evangelism and discipleship.

Your greatest area of leadership is in the pulpit, and you need to draw out examples of both evangelism and discipleship when you preach. Not only that, make sure your application points and illustrations consistently highlight both.

Because of your particular gifting, you may lean toward one of the two. Evaluate your sermons with both evangelism and discipleship in mind and consider asking a friend or staff member who’s gifted on the other side to help you.

2. Pastors, staff, and volunteers must model both.

Do your people see you living out an evangelistic lifestyle in the way you schedule Monday through Saturday? Are you actively engaged in discipling anyone, and do your people know?

I don’t mean patting yourself on the back, but it’s important to give them concrete examples from staff members or key lay leaders so they know what it looks like in the real world.

Most effective evangelism and discipleship take place outside of Sunday mornings and Wednesday nights. They’re usually more organic than programmatic.

People need to interact with their unbelieving neighbors, co-workers, and classmates in order to build relationships and gain trust to be heard in speaking the gospel.

Are you giving them enough margin in their schedule to be able to do that? You might have to eliminate some events, but if you do, explain why.

And then help them see what using that time for evangelism and discipleship could look like.

May God bless His church with faithfulness to the Great Commission, giving us balance and moving us forward in building his kingdom. 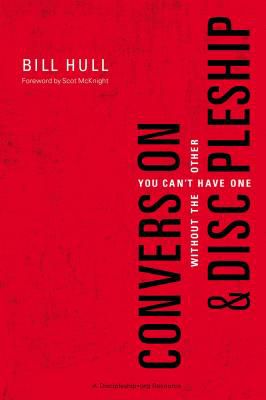 Conversion and Discipleship: You Can’t Have One without the Other

Previous Post: « 6 Truths the Church Should Understand About Gen Z and Racial Justice
Next Post: 4 Unmet Emotional Needs of Pastors »