He was the definition of a lost cause. Born to a poor shoemaker on Christmas day, his father died when he was very young.

After the death, his mother sent him to live with his alcoholic uncle. Before long, he was following in his steps.

At the age of 17, he couldn’t read, was constantly in fights, and was surrounded by the worst of examples.

He narrowly avoided being killed several times, but Christmas Evans was saved when a revival broke out in Llwynrhydowain, Wales, in the late 1700s.

He met with other new converts to study until they could read the Bible in their language.

His former friends were so angry at the change in him, one night, six of them beat him with sticks so unmercifully that he lost one of his eyes.

From Lost Cause to Passionate Preacher

Before long, the young Evans began preaching in local churches. Welsh churches had annual preaching festivals where up to 25,000 would gather to hear bold and poetic Welsh preaching.

Christmas Evans was asked to preach to warm up a crowd one time. They pushed in close to hear him.

He became the newest preaching sensation of Wales, as everyone realized he was “catching the hwyl.”

Dr. Martyn Lloyd-Jones, himself a Welshman, said that the Welsh word “hywl” (pronounced hoo-il) means “the canvas of a ship.”

In preaching, it referred to a man being carried along by the Spirit with great power in his words.

Like a ship driven by sails filled with wind, the preacher driven by the Spirit isn’t working under his power.

It’s one of those things that’s hard to define, but you know when you see it.

Full of the Spirit

The Bible points to this same idea in the book of Acts.

When Peter stands in the center of the rulers and elders of Israel to give a defense for his actions, Luke records that he was “full of the spirit” before he spoke to them.

After being beaten, threatened, and released, they rejoice at being counted worthy to suffer for the name of Christ.

In verse 32, Luke records that “they were all filled with the Holy Spirit and began to speak the word of God with boldness.”

It should be the goal of every preacher to be “catch the hywl” as they share God’s Word.

We all want to be led by the Spirit of God so that our preaching is a demonstration of the power of God, not the wisdom of men.

It can be tough to “catch the wind,” though. Every preacher knows what it’s like to feel deflated after a sermon instead of driven by the Spirit.

How can we learn to capture something as elusive as the wind?

Christmas Evans is a Great Guide

He served as a pastor in his homeland, often with great trials and difficulties. He gave himself to the task of sharing God’s Word, usually in the small, forgotten, and difficult places.

He believed in the power of God’s Word to not only change the lives of others but his life as well. His prayer for his sermons demonstrates that:

Grant that I may experience the power of Thy Word before I deliver it.” — Christmas Evans

Evans was a powerful preacher, sometimes called the Bunyan of Wales. His oratory soared and thundered, at the same time strong and firm.

But the power of his words didn’t lie in himself, however gifted he was. The power of his sermons lay in the fact that he really believed what he was preaching.

The Power of the Word

The preacher who doesn’t know the power of God’s Word can never explain that power to others.

Preaching to change others without being changed by the Word of God yourself is as foolish as a sailor blowing into the sails to move the ship.

Only a power higher than ourselves can move people towards repentance of their sins before God. Only God’s Word has the power to build His church.

This is especially important in the current state of affairs in our world.

Pastors and church leaders are more overwhelmed than ever trying to keep up with constant changes, meeting needs, and caring for the sheep.

It can be easy to lose a routine and lose our time in God’s Word. But now more than ever, we must find our way back to God’s Word, back to God’s power, back to the only thing that’ll never wither or fade.

To “catch the hywl” means you need to have a heart fully surrendered to God’s leading, humbled by your inadequacy, and eager to lean on God’s power.

Pastor, don’t neglect your time in God’s Word. The power of God always follows the Word of God.

We have access to scores of technology and resources someone like Christian Evans could have never imagined.

Let’s harness the access we have to the Bible, unhindered access to God in prayer, and devote ourselves to the Word and prayer like never before.

LUKE HOLMES (@lukeholmes) is husband to Sara, father to three young girls, and pastor at First Baptist Church Tishomingo, Oklahoma since 2011. He’s a graduate of Midwestern Baptist Theological Seminary and can be found online at LukeAHolmes.com. 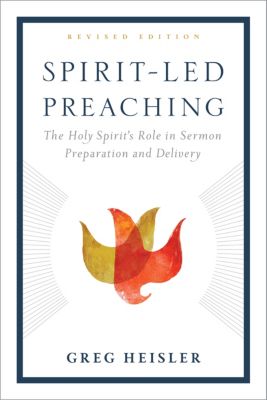