If you’ve ever considered running a marathon, let me give you three rational reasons not to do it, followed by four things I learned from running one that will help your life and ministry.

First up, are reasons you may not want to don the runner’s bib:

I succumbed to a vulnerable midlife moment a few years ago and signed up for a full marathon.

Our last four training runs were 20 miles each. These runs weren’t fun. It stood to reason that running more than 26 miles would be painful, but reason isn’t a factor to marathoners.

Case-in-point: The original marathoner was a Greek soldier named Pheidippides who ran from a battlefield in the town of Marathon to Athens in 490 B.C.

The purpose of his run was to bring the good news of a Greek victory over the Persians. Legend has it that Pheidippides delivered the momentous message “Niki!” (victory), then collapsed and died.

I’m all for delivering good news, but there are much less painful ways of doing it. Our bodies weren’t created to run 4-5 hours at a time!

My training partners estimated we ran about 700 miles in seven months of training for this one race. That took a lot of my free time, which negatively affected my bow hunting.

What’s worse, most marathons are on Sunday mornings, which makes me feel even better about snubbing them on this blog post.

Good shoes matter, and undoubtedly you usually get what you pay for. Anything less than $100 has the effect of running in your house shoes. Add the registration fee, hotel, travel, and meals—it adds up quickly.

All for a T-shirt I don’t need and a medal I’ll hang on the tie rack in my closet.

What Running a Marathon Taught Me

Surely, there are good reasons not to subject one’s body to the grind of prepping for a marathon.

There are, however, valuable lessons to be learned from the work that goes into such a challenge—lessons that have helped me in life and ministry.

Here are four of them:

1. I learned about ENDURANCE.

Christians often forget how much strength we have in Christ. For much of the 26.2 miles, I had to override harsh messages sent from various regions in my body, begging me to stop.

“Therefore, since we also have such a large cloud of witnesses surrounding us, let us lay aside every weight and the sin that so easily ensnares us. Let us run with endurance the race that lies before us” (Hebrews 12:1).

Fear of pain or failure keeps many pastors and believers from even attempting anything new or daring. Faith isn’t an absence of fear; it’s an override of it.

2. I learned about PACING.

On the way to the event, Janet and I were pulled over for speeding. I was having pacing issues before the race even started!

The exciting race environment and cold temperatures can tempt runners to exceed their “race pace.” When this happens, runners often pay for it during the second half of the course.

My race partner and I kept a close eye on our pace so we’d have something left for the finish.

When I allow my life and ministry to become a series of hurried sprints, I become prematurely exhausted. Sabbath is a gift and command from God that keeps my pace sustainable for the long run.

3. I learned about TEAMWORK.

My “great cloud of witnesses” were my training partners. My primary running partner is my wife Janet, who ran her first half marathon that same day—without stopping!

My marathon running partner, Dwight, ran his first full marathon that day. He was a significant source of encouragement to me. Dwight’s wit and wisdom kept me moving forward when I was tempted to give up.

Running the race of life alone is a losing strategy. Who’s cheering you on these days? Who are you cheering on?

4. I learned how to FINISH STRONG.

Leading up to the marathon, several people encouraged me to “finish strong.” I had no idea how much energy I’d have left for the final 6.2 miles since my longest run before the race had been 20 miles.

I did finish strong and, looking back, I’m glad I was able to join the elite group of maniacs who have done the same.

“Let us not become weary in doing good, for at the proper time we will reap a harvest if we don’t give up” (Galatians 6:9). 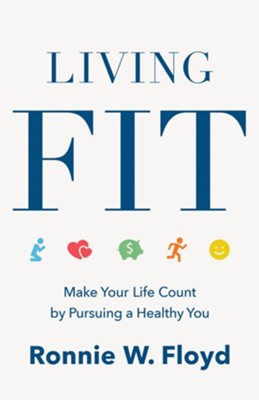 Living Fit: Make Your Life Count by Pursuing a Healthy You

Previous Post: « 5 Reasons Pastors’ Kids Struggle with Doubt
Next Post: Why Talking About Money Feels Taboo—But Why We Should Anyway »