Why the gospel is better than a reboot on life

In our polarized culture it’s rare to find a spiritual phrase the population broadly approves of. Nevertheless, the popular cliché, “God is a God of second chances,” seems to be one doctrine on which many agree.

A quick Google search of the phrase links to speeches of politicians, sound bites from talk shows, and clips from films.

Everyone who says they even vaguely believe in God seems to find common ground around the belief that He gives people a second chance.

But does this proverbial statement reflect the gospel? Here are a few reasons why new life in Christ differs from a second chance and why Christians should be careful embracing a hope that’s built around the latter.

How many attempts are needed to get right with God?

A second-chance gospel reveals half of the good news—the half that says Jesus died for sins. The fact that God is merciful is a beautiful truth. But if Jesus only died to forgive sins, humanity is still in trouble.

What’s missing from this understanding is the imputed righteousness Jesus credits to believers—a righteousness that leaves nothing to chance.

Whereas a second-chance gospel may declare that Jesus erases sin, it also implies He leaves behind an empty spiritual ledger and a morally neutral heart.

This belief promises fresh hope by saying “God gives infinite chances,” but underneath carries the depressing message “God forgives; now the rest is up to you.”

This thinking waters down the authentic gospel in two ways. First, it insinuates man isn’t helpless regarding righteousness—that he only needs a clean slate and a second chance.

Second, it teaches Christ’s sacrifice isn’t effective—that mankind still needs to “get things right” via a vague number of reboots, much like Bill Murray in the movie Groundhog Day.

A Second Chance at the Impossible

Think of it as a kindergartner taking a calculus test. Because he’s only 5, the little tyke bombs the test and receives a bright red “F” atop his page.

Now, according to a second-chance gospel, the teacher might show mercy, tear up the child’s exam, and forgive his failure. But the same lad will not rejoice when a fresh, identical test is placed in front of him for a second attempt.

While some Mensa-in-waiting kindergartner might pass calculus, there’s zero chance a fallen human can pass the test of God’s law (Romans 3:10).

And since there’s zero chance humans will obey God perfectly, why would Christians spread news of a God of second chances?

Is it really good news to get a second chance at the impossible?

What sinners need—and what Christ provides—is Someone who can take the test on their behalf, once-and-for-all, and pass with flying colors.

This is where a second-chance gospel misses the mark. It points people to a false hope in works-based religion where they can get their life in order if they only receive enough time and enough chances.

And His perfection is forever credited to the believer’s account.

What About the Ninevites?

But what about the Ninevites in the book of Jonah? Didn’t they get a second chance? While this is often proclaimed as the takeaway from the book of Jonah, the overall biblical narrative reveals a different lesson.

Look at Romans, for example. Writing about Abraham, Paul observes:

“And he received the sign of circumcision as a seal of the righteousness that he had by faith while still uncircumcised. This was to make him the father of all who believe but are not circumcised, so that righteousness may be credited to them also. (Romans 4:11).”

This may be Scripture’s clearest verse tying together the thread of salvation between saints in both testaments. Old Testament believers weren’t saved by sacrifices (Hebrews 10:4) or circumcision (Romans 3:30).

Instead, those outward signs pointed beyond themselves to saving faith in God. The believing Ninevites, then, didn’t get an empty, clean slate; they received the imputed righteousness of Jesus as a seal, just as believers do today.

If we cap off the account of Jonah with a second-chance ending, we plague the Ninevites with the burden of maintaining flawless righteousness after their repentance. Of course, they couldn’t achieve this righteousness any more than we can today.

No wonder Jonah’s complaint doesn’t have anything to do with fresh starts. He doesn’t lament, “For I knew you are a God of second chances!” No, he cries, “For I knew that you are a gracious God and merciful” (Jonah 4:2).

Grace and mercy. It is for these cross-bought gifts, not for the hope of a second chance, in which believers can draw near to God in confidence.

Thanks to Christ’s imputed righteousness, believers shouldn’t be enticed by a form of legalism that offers an ever-present refresh button on life.

Rather, we should proclaim with vigor that our Savior’s righteousness is perfectly sufficient for all time.

Through Calvary, God didn’t grant a second chance to humans; He provided a holy Substitute—the second Adam—who got it right the first time on our behalf.

How reassuring it is to know God leaves nothing to chance, most notably the salvation of His children? In light of this knowledge, let’s declare that the gospel gives new life, something that’s infinitely better than a second chance. 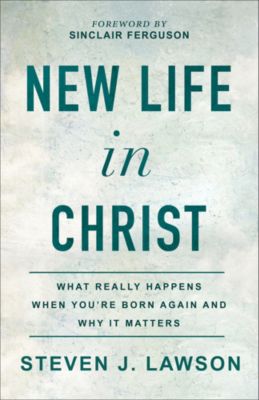 New Life in Christ: What Really Happens When You’re Born Again and Why It Matters