It’s morning rush hour in New York City. A Manhattan-bound subway car is crammed with at least 100 people, but aside from the familiar squeal of wheels on metal, it’s eerily quiet.

No one is talking. No one is making eye contact. A handful of people appear to be asleep; the rest are wearing ear buds and grasping glowing screens.

They’re pressed in together, shoulder to shoulder, but occupying a hundred different worlds.

If a recent national study holds true, about 43 of those people feel isolated. Almost half of them would say they are sometimes or always lonely.

And about 47 of them would say they don’t have meaningful face-to-face interactions with others on a daily basis.

The younger people would most likely express the greatest struggle in this area; it’s no longer older Americans, but young adults between 18 and 22 who claim the title of the loneliest generation.

These are a few snapshots from a survey of 20,000 Americans conducted by Cigna, one of the largest health insurers in the country.

The company called the results “alarming” and joined a growing number of voices speaking out about a “loneliness epidemic” with dire consequences.

Americans of all ages, ethnic backgrounds and income levels are struggling with loneliness, whether they hail from sleepy, one-stoplight towns or “The City That Never Sleeps.”

“We have crowded loneliness,” says James Roberson, lead pastor of The Bridge Church in New York City. “We’re around people, but no one is connected.”

The average age of Roberson’s multi-ethnic, Brooklyn-based church is 26, and 85% of the congregation is single. Loneliness is an issue that comes up repeatedly.

Roberson says the ability to find and nurture those intimate friendships is “a dying art.” To help bring it back to life, he’s encouraging the church to make this commitment: “I’m going to search for relationships like I would water or food.”

Loneliness Is Hazardous to Your Health

There’s good reason to treat meaningful relationships like basic necessities. The effects of loneliness can be extreme, and evidence of a public health crisis is mounting.

A 2018 article in the Public Policy & Aging Report listed one study after another linking loneliness to a slew of health problems and even early death.

Depression, dementia, high blood pressure, inflammation, and decreased immunity are all more prevalent in men and women who are lonely. In fact, an analysis of multiple studies involving hundreds of thousands of people found loneliness is as deadly as chain smoking, and deadlier than obesity.

Erin Davis began to study these effects after loneliness unexpectedly overwhelmed her in a very public place—onstage during a conference at LifeWay’s headquarters in Nashville.

“I just stood on the stage and cried. And said, ‘I’m really, really lonely. Would anyone be brave enough to stand with me and say that you’re lonely too?’”

About two-thirds of the auditorium stood up. Afterwards, women waited in line to express how lonely they felt. Like Davis, many of them were wives and mothers.

Sensing she had struck a nerve, Davis turned to the Bible and began an in-depth study on loneliness and community, which led her to write Connected: Curing the Pandemic of Everyone Feeling Alone Together (B&H Publishing, 2014).

One of the phrases that jumped out at her came from an ancient story of friendship: “…the soul of Jonathan was knit to the soul of David…” (1 Samuel 18:1, ESV).

Within those words, Davis discovered a root cause of her loneliness: “My life was not knit together with anybody else’s life.”

Why Are We Lonely?

Why are so many people trading deep, “soul-knitting” relationships for surface-level interactions that lead to isolation? There are many factors, but experts say three of the big ones are busyness, individualism, and those ever-present glowing screens.

People are busier than ever; it’s not surprising that relationships fall by the wayside, especially as families increasingly pack up and move away from their relatives. And then there’s the rising tide of individualism—the world view that puts self above all else.

“When we’re individualized, people become a commodity or a means to an end.”

“Part of being made in God’s image is a desire for community, because God has never been alone,” Gray says. “Father, Son, and Spirit have existed eternally in a love relationship.”

If God doesn’t see fit to be alone, neither should we.

“We were created for connection,” says Joshua Straub, PhD., LifeWay’s marriage and family strategist. “We’re hardwired for connection. We know this Biblically, but neuroscience research shows this.”

Science also shows screens are rewiring our brains. And you don’t have to be a scientist to notice some of the ways screen time is replacing in-person interaction.

“I think screens are a massive issue in our culture today,” Straub said.

“Absolutely nothing can replace eye contact for brain development in kids and for deep connection within a marriage. I think technology and busyness are two of the greatest culprits to deeper connection. When we’re running frantic and busy, we miss slowing down enough to get face-to-face eye contact with our kids or with our spouse.”

Straub adds that missing out on familial connections can be traced to pressures outside the walls of the home.

“You have to be intentional to fight against the cultural tide,” he says. “Culture will make you believe you’re missing out … but the thing we end up missing out on are the people under our own roof, who are the people we love the most.”

The Church vs. Loneliness

As Christ followers pray for strength and wisdom to resist the cultural tides that lead to isolation, there are abundant opportunities to be light in a dark and lonely world. Here are three of them:

Slowing down and seeking God is counter-cultural. Encourage individuals and families to remember the Sabbath and keep it holy (Exodus 20:8).

“That’s where you go back to some of the ancient spiritual disciplines,” Gray says.

“Once a week, how are you setting aside a day where you are communing with the Lord—where you are delighting in things you like to do, without your mind racing? Also, learning the spiritual discipline of silence and solitude.”

2. Talk about loneliness and mental health.

“I think that in the church, sadly, we have not talked about mental illness,” says Gray.

“It’s really strange to me how the people who will say, ‘Don’t take medication for mental illness’ are the same people who will get immunization shots before they go to India on an international missions trip. God made medicine. God has equipped people with the necessary skills to help. And it requires a community to do this.”

The first Christ followers were inseparable. They didn’t just see each other once a week; they were in each other’s homes, at each other’s dinner tables, sharing what they had and learning together (see Acts 2:42-47). This is our blueprint for community.

Roberson breaks it down for an Instagram audience: “We don’t want to take pictures of the food; we really want people to eat with us.”

But it’s worth it.

“People walk into our home and see brothers and sisters who are totally different, sharing their hearts and committing to one another,” Roberson said.

“I can go anywhere and mess up and be left out. I can be cancelled anywhere. The church is different because we commit to broken people.” 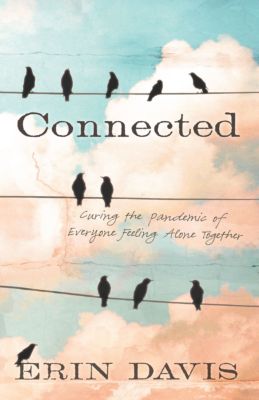 Connected: Curing the Pandemic of Everyone Feeling Alone Together