I love Christmas carols. I don’t mean the Rockin’ Around the Christmas Tree fluff playing on your local all-holiday pop station. I mean the classics like The First Noel, O Come O Come Emmanuel, Angels We Have Heard On High.

The ones that actually mention Jesus.

But here’s the thing: even the most Bethlehem-centric Christmas songs often give us the wrong idea. The lullaby portraits of silent nights and heavenly peace? That didn’t happen.

The first Christmas was beautiful and miraculous, but it was also dirty and loud and confusing. So, in an effort to recover my favorite holiday from its snow globe prison, here are five things about the first Christmas that no one ever preaches.

Neither delivery rooms nor livestock stables are tranquil places. Ask any mom how much “heavenly peace” she experienced during childbirth. Over Mary’s pained cries and Joseph’s anxious admonitions, you probably couldn’t hear any cattle lowing if you tried.

Even after the birth, there wasn’t much rest. Newborns cry often and animals don’t sleep quietly. A baby in a drafty barn is a formula for a sleepless, troubled night.

Nor was it quiet in the fields. The second chapter of Luke says there appeared a “great company of heavenly host” to shout the news. The sight and sound of other-worldly creatures was so overwhelming that verse nine says they were “terrified.”

This was not an angelic barbershop quartet. This was a gospel show choir with celestial amps!

2. It was medically risky.

Traveling during late-term pregnancy is not a good idea. These days, doctors recommend staying home after 32 weeks, and airlines won’t even board pregnant women past 36 weeks.

The last thing Mary would have wanted to do just before her due date would be to travel to Bethlehem.

We don’t know exactly how they traveled. An apocryphal gospel called the Protoevangelium of James, written about 145A.D., gives us the image of Mary on a donkey. But she might have walked or ridden a camel.

But this much is certain: Whatever the mode of transport, it wasn’t cushy. No shock absorbers or air conditioning. Just jostling and jolting and the nagging worry that all that movement wasn’t good for the baby.

Are you picturing it?

More than a week of travel.

Riding on an animal.

This was a risky trip.

Because Mary was human, she probably doubted. I wonder if she rolled over that first night while the baby slept and whispered into the dark, “Joseph, are you awake? What if we’re wrong?”

After all, the promise she was living was so incredible. Her little boy was Messiah? She was the mother of God? Maybe she misunderstood what the angel really meant. Maybe she was making this into a bigger thing than it was supposed to be.

Mary’s doubt could be the reason for Mary’s reassurances. She received a lot of them. Over and over, Jesus’ identity is confirmed: by angels, Elizabeth, shepherds, magi, Simeon, Anna.

If Mary had received so many assurances, could it be because she needed them? Perhaps the Father was whispering, “I know this is hard to take in. I know you’re prone to explain things away. Here’s another proof. Keep believing.”

Mary isn’t the only doubter in this story. If we’re honest, we all have doubts. And the story of Christmas doesn’t do much to calm them.

After all, virgins don’t have babies. It’s medically impossible. And then there’s this truth: Christmas isn’t the only holiday that claims a virgin birth.

Zoroaster, Mithras, Perseus, Horus, and Krishna are all said to have been born miraculously.

Krishna’s mother Devaki wasn’t a virgin when the god Vishnu visited and impregnated her, but her pregnancy is said to be miraculous. Buddha’s mom, Maya, is said to have had a similar experience.

Zoroaster’s mother, Dughdova, was a virgin when she conceived him by a shaft of light. The mother of the Sufist poet Kabir was both a virgin and a widow when she gave birth through the palm of her hand. A rock gave birth to Mithras.

And the Egyptian god Horus was supposedly born to the goddess Isis after she retrieved all the dismembered body parts of her murdered husband Osiris.

These stories sound outlandish to us, of course. They seem too unlikely to be true. But let’s be clear: Rocks have as good a chance of giving birth as virgins. The origin story of the Christian Messiah doesn’t do us any favors in the believability department.

This, in itself, is both a paradox and a proof. The paradox is that Christianity espouses conflicting goals: It wants more people to believe, and it insists on creating the hardest doctrine to believe. And the proof is in the unlikelihood of this fantastic story being fiction.

If you’re creating a religion of your own making, and you want people to believe it, this isn’t the way you start.

Like so many paradoxes of faith, the birth of Jesus is too unbelievable not to be true. That’s what happens when the ineffable becomes terrestrial; when the eternal Word becomes temporal flesh.

Good art is relentlessly concrete. Poets, painters, and playwrights deal in visible things—all the subjects of art are tangible.

They give tactile expression to abstractions like love, hate, beauty, and wonder. They express experience by creating it, not describing it.

He became love. Personified it. The artist as art. The divine incarnate. The untouchable tangible. The incarnation was a miracle and a sign and a lot of other things. But it was also this: the world’s greatest work of art.

In these ways, and many others, our modern portrayals of Christmas sometimes lack realism. There’s always something surprising about the Christmas story — something powerful that we’ve unintentionally hidden under thousands of years of tradition, adaptation, and wrapping paper.

Consider these five truths as a framework for a Christmas conversation or an advent sermon series. But my deepest hope is that the first Christmas will be a little more real this year.

RYAN SANDERS (@theryansanders) is a pastor at Irving Bible Church in Irving, Texas, writes regularly at TheRyanSanders.com, and serves on the editorial board for the Dallas Morning News. He’s the author of the newly released Now & Then: An Advent Devotional. 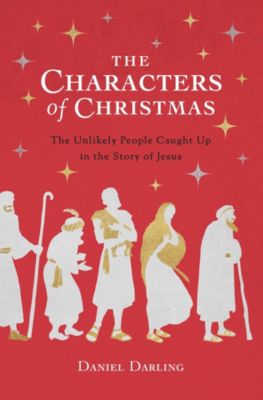 The Characters of Christmas: The Unlikely People Caught Up in the Story of Jesus