He’s a tremendously famous musician. Some people even use the word genius to describe him. His music moves people, as it has for a long time. He changed the industry. By all accounts, he’s a legend in popular music.

But then something happened.

The success that accompanied his musical ability started to wear on him. He’d conquered the world of popular music, but it’d left him weary. He was looking for something deeper and truer.

By God’s grace, the famous musical genius repented of his sins and surrendered to the lordship of Jesus Christ.

As you might expect, he made an album as a vehicle of expressing his infant faith. And, as you also might expect, some of his old fans hated it. For them, the music contained far too much Jesus and not enough of what drew them in the first place.

Of course, the genius superstar had his detractors on the other side, too. As they saw things, there was no way this man’s faith was legitimate. They saw it as a scheme to sell more albums.

It’d make sense if you thought I was talking about Kanye West.

No, I’m talking about Bob Dylan. In the early 80s, Dylan would release two more explicitly gospel albums. They’d be his last recordings in the gospel music genre. Dylan has released several albums since 1981’s Shot of Love, and none are what one might call a gospel record.

The answers to that question are likely numerous. Perhaps the death of Keith Green left Dylan jolted. Maybe three gospel albums were all Dylan wanted to do before moving back to making records that had more appeal to the mass market.

But there’s another possible reason for Dylan’s retreat from the contemporary Christian music market, and it’s one that every pastor should consider.

It’s reported Bob Dylan said he left the world of gospel music because it was too hard to tell the difference between pastors and promoters.

Pastor, much has been written to try to get you to build your platform. But please know this: your platform won’t save anyone.

When the teenager in your congregation is having a crisis of faith, it won’t be your impressive amount of Twitter followers that’ll pull her through.

Only Jesus will give her what she really needs.

That guy who’s been coming on Sunday mornings for a few weeks because he has genuine questions about Christianity doesn’t need a celebrity pastor. He needs the gospel.

Perhaps one reason why revival tarries is too many of us have traded in the “demonstration of the Spirit and of power” (1 Corinthians 2:1-5) for the presentation of our own talents and influence.

If there’s one thing recent history has shown us, it’s that the pathway to the top the “Christian Celebrity Mountain” can sometimes include stops along the way in territories of compromise and self-centeredness.

And the descent is sometimes sudden and disturbing.

This isn’t to say every Christian with a big name and a large following is a phony. They’re not. Many well-known Christians are faithfully representing Christ and strengthening His Church.

However, we must guard against idolatrous imitation. Instead, let’s aim higher and seek to be like Jesus.

If that means a large platform, so be it. But if it means decades of serving in anonymity, we must remember the glory of God is infinitely more significant than the praise of man.

Pastor, if you’re carrying the burden of trying to be the next (insert name of favorite Christian celebrity), give that needless weight to Jesus and rest in who you are in Him.

Stop building your platform and instead focus on advancing the gospel. The world doesn’t need your platform, and, frankly, neither do you. 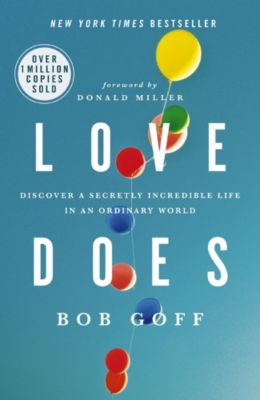 Love Does
Discover a Secretly Incredible Life in an Ordinary World