Accepting the reality of conflict associated with major changes in churches and ministry organizations may seem like settling for a sub-standard version of Christian leadership. It is not.

Facing reality should never be equated with compromising standards. Conflict in Christian ministry is not new. It occurred frequently (and was usually managed well) in New Testament churches and among prominent New Testament era leaders.

Wise leaders spend less time decrying conflict as unspiritual or unnecessary and more time developing a principled response for managing it in their ministry setting.

Teaching the following principles and following them as normal leadership practices will help leaders minister more effectively during conflict related to major change.

Wise leaders anticipate conflict. They know it has been part of ministry leadership since the founding of the church.

The early church experienced conflict among its members (Philippians 4:2-3a). Two women—Euodia and Syntyche—were urged to “agree in the Lord.”

Paul described them as “women who contended for the gospel at my side,” meaning they were mature Christians. Yet, their conflict was so serious Paul addressed it in an open church letter.

There was also conflict between prominent church leaders. Peter and Paul got into a dispute over table fellowship with Gentiles.

Paul described the conflict when he wrote, “I opposed him (Peter) to his face…in front of everyone” (Galatians 2:11, 14). That must have been quite a showdown—two spiritual heavyweights arguing faith and practice in a public dispute!

The early church also had conflict over doctrine—like the dispute over circumcision and the nature of the gospel. (Acts 15:1-35) When the conflict erupted, Paul and Barnabas “engaged them in serious argument and debate.”

The debate, its intensity, and its resolution take up an entire chapter in the early church’s history recorded in Acts. This underscores the importance of this story as a model for handling theological conflict.

If the nascent church had these problems, why should leaders today expect the contemporary church to be any better? The church has always had and will always have internal conflicts.

Wise leaders anticipate this and are proactive in preparing for conflict. Preparation for conflict includes preaching or teaching on it as a routine part of organizational development, studying conflict management with a leadership team, and minimizing anticipated conflict as soon as it appears on the horizon.

Being proactive means taking steps to inform and educate people about conflict before it happens, not reactively waiting until it happens.

It also means solving small problems before they become large ones—preventing little fires from raging out of control and causing irreparable damage.

While no one really likes facing up to conflict, wise leaders know they must take initiative to deal with it. It seldom goes away on its own. Dealing with conflict requires leaders to go where angels fear to tread.

Addressing conflict within an organization requires dealing directly with opponents (and/or helping them face each other).

Meeting with people who oppose leadership decisions about major change is difficult. Yet adequately resolving those issues requires personal interaction.

Despite the prevalence of electronic media, these conversations and meetings are best done face-to-face. Body language, vocal tones, and other non-verbal nuances make all the difference in determining the true meaning behind the words used to communicate about delicate matters.

It is easier to discern true issues driving a conflict and ferret out extraneous information clouding their judgment by having personal meetings with troubled followers.

Another advantage of these meetings is the opportunity to pray together, even kneeling together or otherwise demonstrating mutual submission to God while seeking a resolution.

The most challenging part of facing conflict intentionally is discerning when productive dialogue is over and the decision to end a relationship has to be made.

Pastoral leaders dread those conversations. We are shepherds who collect and protect a flock, not divide and drive away sheep.

When it becomes evident unity about a major change is not possible, there are only two options left for disaffected followers: quiet cooperation with the new direction or separation from the organization.

Allowing them to remain in open conflict hampers the mission, and therefore, is not an option. Reach this conclusion slowly and carefully, but have the courage to make those decisions when absolutely necessary.

One mistake leaders make when addressing conflict is responding disproportionally to the level of the opposition expressed.

In other words, do not make more of the conflict than it really is. Just because a person posts a critical comment or a snarky question on Facebook does not mandate convening an elders meeting to discuss church discipline.

Make sure your plan for addressing detractors is in proportion to the seriousness of the opposition to accomplishing the major change (and therefore, the organization’s mission), not just a response to your wounded pride or hurt feelings.

Another common mistake is addressing conflict in a public forum—like preaching about it, mentioning it in a blog, or discussing it in a hallway conversation. Doing so is cowardly and deceitful.

If a conflict needs to be addressed with a person or a group, meet with them directly and intentionally. Do not use public forums to solve interpersonal issues—even when the attacks may come through a public forum.

Leaders cannot control comments from detractors, but they can control their response. Leaders must choose wisely how, when, and where to interact with people in conflict with major change decisions.

When leaders resolve conflict appropriately, they reach the best decision possible—not necessarily one that makes everyone happy.

The goal of conflict resolution—particularly conflict related to major change—is advancing the organization’s mission as it aligns with God’s mission.

When leaders resolve conflict with a leadership decision, the goal is not compromising to accommodate a mitigated version of the proposed change. Rather, the goal is advancing the mission by implementing the major change successfully.

The focus of the resolution process is helping everyone understand how the major change is related to the mission and how they must adjust their expectations accordingly.

There are two possible healthy outcomes for conflict resolution about major change related to organizational mission.

First, leaders and followers agree to work together to implement the change and accomplish their shared mission.

Second, leaders and followers agree to separate and continue to advance God’s mission, but in a different church or ministry, with people who have a different organizational mission.

Those are the only two acceptable options. There are two other options—both unacceptable.

First, it is untenable for leaders and followers who cannot agree on a major change to remain together. Christians share different convictions about many optional aspects of church ministry and organizational function.

Life is too short for prolonged arguments over these issues. Time is better spent moving on from conflicted relationships and finding a church or ministry with a compatible vision.

A second unacceptable option is using conflict as an excuse for dropping out of Christian service. That is never an option! Conflict may be a signal to move to a different church or organization, but never an excuse to abandon God’s mission.

When believers do this, they are using conflict to validate their pride. A far better choice is moving to another setting more aligned with their convictions about the mission, method, and practice of ministry.

Part of resolving conflict well in organizations is learning to accept mixed outcomes.

When a conflict is successfully resolved—particularly in a large organization—some people will be pleased, others will be disappointed, some will stay fully engaged, and some will leave for other opportunities.

Most leaders want every conflict to end with everyone happy and satisfied, but that is seldom the case.

Another aspect of accepting mixed outcomes is not personalizing the results of conflict resolution. When leaders make a good faith effort and do their best to resolve a conflict, anything less than total unity can feel like failure.

The emotional and spiritual responses of other people, however, are too heavy a burden to place on any leader. Good leaders sometimes feel like failures when people withdraw their support or leave their church or ministry.

Wise leaders manage those feelings, recognizing them but not legitimizing them as the final barometer on their conflict resolution effectiveness.

Leaders who cannot accept mixed results are doomed to a perpetual sense of frustration with themselves and the people they lead.

Once every effort has been made to resolve a conflict, regardless of the result, leaders must move on! Stop revisiting, talking about, and thinking about the conflict. Move on! Easier said than done, right?

The key to moving on from unsatisfactory conflict resolution is refocusing on accomplishing your mission. Do this by proactively implementing the major change.

Make a list of what needs to be done to accomplish your mission. Then, get started on it.

Filling your time with meaningful, purposeful activity is the best antidote for the malaise felt after trying unsuccessfully to resolve stubborn conflict.

God has called leaders to minister effectively during conflict, not resolve it perfectly every time. He has commissioned leaders to advance his mission by carrying out the mission of their church or ministry organization.

When every reasonable and spiritual effort to resolve conflict has been exhausted, avoid perpetual preoccupation with the past at the expense of missional advance. 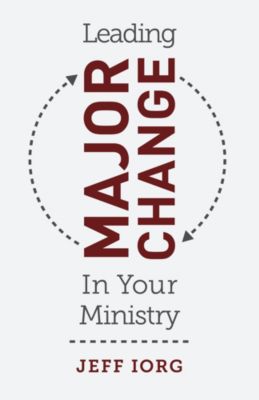