Apologetics (noun) — (from Greek ἀπολογία, “speaking in defense”) the discipline of defending religious doctrines through systematic argumentation, discourse, and the presentation of evidence

For some people, apologetics is not discovered until after making a profession of faith.

Many Christians did not come to believe as a result of investigating the authority of the Bible, the evidence for the resurrection, or as a response to the philosophical arguments for God’s existence. They simply responded to the proclamation of the gospel.

Although these people have reasons for their belief, they are deeply personal reasons that often do not make sense to unbelievers. They know the truth but are not necessarily equipped to share or articulate the truth in a way that is understandable to those who have questions about their faith.

It is quite possible to believe something is true without having a proper understanding of it or the ability to articulate it.

Christians who believe but don’t know why are often insecure and comfortable only around other Christians. Defensiveness can quickly surface when challenges arise on issues of faith, morality, and truth because of a lack of information regarding the rational grounds for Christianity.

At its worst this can lead to either a fortress mentality or a belligerent faith, precisely the opposite of the Great Commission Jesus gave in Matthew 28:19-20.

The charge of the Christian is not to withdraw from the world and lead an insular life. Rather, we are to be engaged in the culture, to be salt and light.

The solution to this problem is for believers to become informed in doctrine, the history of their faith, philosophy, logic, and other disciplines as they relate to Christianity.

They need to know the facts, arguments, and theology and understand how to employ them in a way that will effectively engage the culture.

In short, the answer is Christian apologetics.

One of the first tasks of Christian apologetics is to provide information. A number of widely held assumptions about Christianity can be easily challenged with a little information.

This is even true for persons who are generally well educated. C. S. Lewis had always believed the Gospels were collections of myths like those of Balder, Adonis, and Bacchus. Lewis held this view until he first read the Gospels at age thirty-one.

Having read as many myths and legends as he had, Lewis recognized that what was in the Gospels did not fit this literary genre. The Gospels were simple eyewitness accounts of historical events, lacking the artistry of ancient myths.

Other assumptions widely held in our culture can be challenged by both information and argument:

This is just a sample of the challenges and questions that apologetics training equips believers to answer. And it does so in three ways.

The results of training in apologetics are boldness, security, and a lack of defensiveness. Apologetics enables the believer to engage the world without acquiescing to it and without compromise.

Much as how one must understand a virus or poison in order to counteract it, so must Christians understand and recognize the fatal flaws of unbelieving thought, be able to expose them, and provide a more adequate worldview.

These are the tasks of apologetics.

Two things need to be made clear at this point regarding the use of apologetics.

Christians are to speak truth in this world, and apologetics is one way believers do that. God could choose to make Himself known by knocking everyone to the ground for a few days, as he did Paul.

Instead God uses his people as his agents. And as his agents, Christians need to speak the truth in love. Sometimes this calls for using well-formed arguments.

An apologist is never going to argue someone into the kingdom. Christians need to do their job in an informed and gracious way and try not to add any offense or stumbling block to the gospel.

The vast majority of Christian apologetics is done every day through casual conversation, not in classrooms or debates that can seem to be detached from any personal relevance. It is here that we discuss and attempt to make sense of the issues of life.

And it is for such spontaneous conversations that Christians need to be prepared.

Excerpted and adapted with permission from Ultimate Guide to Defending Your Faith by Doug Powell. Copyright 2019, B&H Publishing Group. 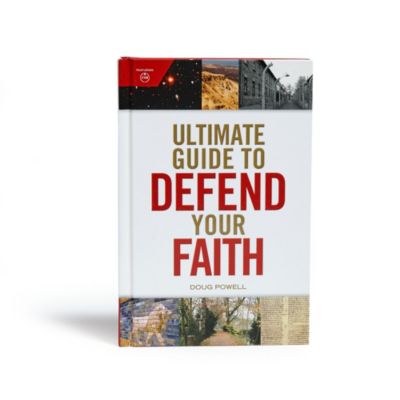 Ultimate Guide to Defend Your Faith