Nestled in San Jose, California, is a bizarre and unnerving house that serves as a year-round “haunted” tourist attraction.

The 24,000-square-foot manor called Winchester Mansion contains 160 rooms—each one stranger than the last. Structural oddities include stairs that lead nowhere, doorways built into ceilings, chimneys that fall short of the roof, and exits that open to dangerous drop offs.

The reason for these structural quirks is the house’s original owner, Sarah Winchester, was obsessed with construction.

She was convinced the only way to ward off evil spirits was through relentless building and thus commissioned workers to craft mysterious additions to the sprawling mansion for 38 straight years.

But in an even stranger twist, Winchester refused to hire an architect for her elaborate construction project. She continually commissioned workers with no overarching master plan.

The end result was an impractical labyrinth of a home that, after she died, was balked at by appraisers and written off as practically worthless.

The Winchester Mansion serves as an object lesson for what it looks like to build in an arbitrary fashion with no end goal in site. And for Christians, who are called by God to build their life with intentionality, the lesson rings even louder.

Whether you’re building a church or ministry, a family, a career, or even yourself through personal development, biblical principles will help you develop a holy—rather than a haphazard—legacy.

Here are three ways Scripture directs believers to bring purpose and planning to their lives.

1. BUILD WITH AN ETERNAL PERSPECTIVE

In Luke 12:13-21, Jesus tells the Parable of the Rich Fool, who, having been blessed with abundant provision, decides to invest in bigger barns in order to “have many goods stored up for many years.”

Jesus bluntly calls the man a fool since he would unknowingly die that very night, leaving his ambitious building project abandoned. Christ then ends the parable with the stern warning, “That’s how it is with the one who stores up treasure for himself and is not rich toward God.”

In this parable, Jesus doesn’t criticize the man’s plans, but rather his perspective. The rich fool had eyes only on the life that was immediately before him. In contrast, Christ directs His followers to shift their focus toward eternal goals so that their assets become kingdom commodities.

It’s likely you’ve never considered building a barn like the rich fool—or a mansion like Winchester—but how are you currently using your resources such as time, money, gifts, personality, and energy within your spheres of influence?

Does what you’re building now—even for ministry purposes—allow you to be rich toward God as you go about it?

2. BUILD STEADILY TOWARD AN END GOAL

Luke can barely record the Parable of the Rich Fool before he visits another of Jesus’ speeches about building projects. This one takes place in Luke 14: 25-34, where Christ is warning people about the cost of following Him.

Jesus describes a person wanting to build a tower, but who doesn’t first stop to see if he has enough funds to complete it. The overeager builder is met with ridicule from onlookers when he runs out of money and is forced to abandon his project midway through.

Christ’s point is that while grace is a free gift, Christian discipleship is costly and should be approached with seriousness. Jesus wants followers who are willing to sign up for long-haul faith.

But the principle also extends to any task the Lord assigns to us. Whether we’re building up kids, a church, a career, or anything else, we honor God when we consider the goal with a spirit of endurance and dedication that enables us to hang in when things get tough.

Are there assignments the Lord has given you that you’ve lost focus and passion for—areas of life in which you resemble Winchester by randomly addressing the tyranny of the urgent instead of operating under an overarching, long-term strategy?

If so, take time to step back and reevaluate where it is your building project is taking you and what you need to do to reorient yourself and those around you so that you can finish well.

3. BUILD WITH THE LORD

Psalm 127:1-2 is a well known passage in the Bible. It begins with, “Unless the Lord builds a house, its builders labor over it in vain.”

This passage describes how human and divine synergy is important for everything Christians put their hands to. The warning here isn’t just that one’s work might suffer some loss of effectiveness—but that it will be all for nothing if not connected to the Lord’s purposes.

Again, think of Winchester and the decades of manpower that went into building up her mansion, only to result in a property that was considered worthless at the end.

To help us avoid such a fate, consider this extrapolated advice:

But how does one build with the Lord? The answer involves prayer, spending time in community with other believers, and a staying connected to God’s Word. These things enable a believer to abide in Christ and develop sensitivity to God’s Spirit at work in the world.

It’s easy to allow our days, and even our ministries, to become swarmed with activity—much like the halls once were in Winchester Mansion. But does our bustle of “getting stuff done” really matter for eternity?

It does—when we’re intentional about daily abiding in Christ.

Do a quick survey of these images of some of the strange quirks in the Winchester Mansion and you’ll get a visual of what it looks like to build in a haphazard fashion.

These photos should strike us as spooky—not because of imagined ghost stories—but because they represent the dangers of building our lives in an unintentional and meandering fashion.

Let’s commit to constructing our lives and ministries with clear goals in mind, heeding God’s call to, “pay careful attention, then, to how you live—not as unwise people but as wise—making the most of the time” (Ephesians 5:15-16a). 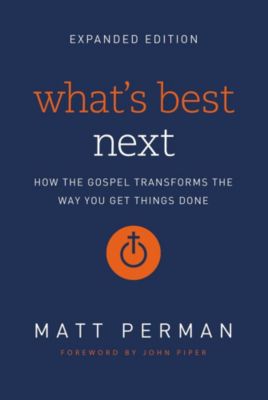 What’s Best Next? How the Gospel Transforms the Way You Get Things Done

Previous Post: « When Legacy Becomes a Lie
Next Post: How to Gain Trust Before Leading Change in Your Ministry »