Although a budget isn’t considered by many to be a spiritual topic—much less an exciting ministry conversation to have—every church faces financial issues.

And every church, at some point or another, will face a budget shortfall.

Josh King and Sam Rainer discussed what a budget shortfall can look like for churches, and offered tips for managing those times of scarcity during a recent Est. Church podcast, part of the LifeWay Leadership Podcast network.

There are two kinds of shortfalls that come to mind for Rainer.

“I’ve seen churches get overzealous,” says Rainer. “They get so happy that giving was over budget and then went out and spent too much. When giving is good, sometimes the spending is out of whack.”

Here are some ways King and Rainer say churches can manage financially during tough times and be proactive before a financial crisis hits.

One mistake churches make, King says, is when churches look at expenses first.

“Look at the last several years,” he says. “How much did you bring in? And why did you bring that money in? Try your best to project your revenues first. Don’t do expenses first and say, ‘I hope I can bring in this much.’

“I’m amazed at how many churches grow to accept they don’t meet budget. That’s not a healthy way of doing things.”

King says the bigger the church, the more complicated it becomes. But even still, a church budget should be managed as a family budget would be managed—based on what is expected to come in, not what is hoped for.

And different churches, he adds, can have varied healthy models. Some work from 100% of their project revenue.

Others, out of precaution, tend to work a little under 100%.

“We look at the last few years,” Rainer said of the church he pastors in Florida. “This year, we budgeted 5% under what our receipts (actual giving) were. This year’s budget is lower than last year’s, because we want to streamline our budget.”

Rainer says when a church is projecting a budget the weight of the previous year’s income should certainly be considered, but most of the projection should be based on the previous five years.

“Don’t set a budget off a random bump,” adds King. “If you have $125,000 come in one year when you’re used to $100,000, don’t raise your budget. It might have been a case where a church member died and left part of an estate to the church. And that’s not going to happen every year.”

2. Budget your surplus for extras; don’t build it into the operational budget.

If a church finds itself with a surplus, Rainer says it’s wise to add another budget line for it, rather than build it into the operational expenses.

“That’s how we have things that don’t normally go into the budget that cost money—like an A/C unit that needs to be replaced or an elevator that needs to be repaired,” he explains. “A budgeted surplus can go toward things like this to handle deferred maintenance.”

3. Communicate openly with your congregation.

Will people stop giving when numbers are up? Will visitors think the church is a sinking ship if they hear about numbers being down?

The answer to both of these questions for King is “no.”

“I’ve seen in the two churches I’ve pastored that when there’s a surplus, people actually give more,” he says. “In times of deficit, people tend to hold back on giving. People want to be a part of winning.”

So what and how often should church leaders share when it comes to budget information?

“We share financial updates weekly,” says Rainer. “We’re in the middle of a capital campaign, so we give updates on that as well as giving regular updates and comparing the numbers with the budget.”

King adds his that his church in Arkansas shares the budget updates with members through a monthly newsletter that covers other church-related topics.

An important way to communicate, Rainer adds, is through preaching.

“Preach on giving, but do it in a way that doesn’t guilt people into giving,” he says. “That works for about one week.”

Kings says it’s also crucial and considerate for church leaders to be forthright with staff about budget issues, especially if is affects salaries or could incite layoffs.

“Behind the scenes, we should be having conversations with staff about this,” he says.

“Especially if layoffs could occur. This gives them time to start looking before the time is up. I once had to have conversations like this with my staff, and thankfully, giving came through and it didn’t happen. But don’t wait until it get close.”

4. Cast the vision in a way that inspires people to give.

And since, Rainer says, people can’t –and shouldn’t—be guilted through a budget shortfall, there needs to be some fresh vision that gets people excited about giving again.

Tell people about your mission partners. Find a way to show them tangibly how their contributions are making a difference.

King attempts to do a form of this each Sunday.

“I try to make a point of saying thank you for giving,” he says. “Something like, ‘That happened because you gave sacrificially in the plates that are about to be passed.’ We’ve seen a significant uptick in giving since we started doing that.

“We thank people for volunteering, and we also need to be intentional about thanking people for giving.”

Simply put, churches can offer more options to give.

“A lot of churches don’t realize this, but the more options people have for giving, the more revenue a church will bring in,” says Rainer. “We just started online giving in 2015, and our budget went up significantly. And it was exactly the online giving amount.”

Another strategy for maximizing revenue, says King, is to examine where the money is going; you may discover unnecessary expenditures.

“One of the very first things I’ve done when I’ve come onboard as a pastor is look through every line item of a budget,” he says.

“Ask questions like: Could we renegotiate our photocopier contract? Where are we buying paper? Reevaluate things like that. You can probably cut cost without cutting ministry.”

Kings adds that it’s crucial for church leaders to implement a specific strategy rather than generically asking for more money. This makes it more digestible and actionable for church members to participate financially.

“It’s hard for people to wrap their minds around a $20,000 shortfall,” he cautions. “But if you communicate that if everyone who isn’t giving anything now would give, say, $10 week, that would help. Or, if everyone who is already giving could give $10 extra a week, we could do such-and-such.”

No matter how you approach a shortfall with your congregation, King says a church “must create a strategy its people can really get behind.” 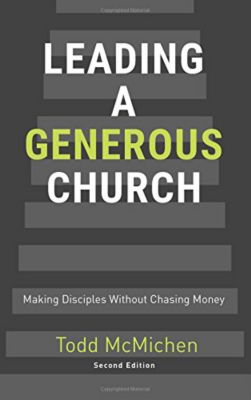 Previous Post: « 3 Ways Churches Should Champion Single Adults
Next Post: Pastoring on the Other Side of the Storm »