Most retirement age pastors and missionaries say their current life is close to ideal, but some who have entered retirement say they could’ve been better prepared.

In a survey sponsored by Shepherd’s Fold Ministries, Nashville-based LifeWay Research asked 2,451 pastors, ministers and missionaries who were retired or at least 67 years old about their life, health, relationships, reflections on ministry, and how they’ve adjusted to their current life stage.

The vast majority think fondly about their previous ministry. More than 9 in 10 (92%) say they are satisfied with their ministry efforts before retirement, with 59% saying they are very satisfied. When asked to think about their overall life today, including relationships, spiritual health, finances and physical health, 3 in 4 (74%) agree their life is close to ideal in most ways.

Similar numbers describe their current life conditions as excellent (76%), while more than 8 in 10 (86%) say they are satisfied with their life today.

“These three questions were used to create a life satisfaction score,” said Scott McConnell, executive director of LifeWay Research. “Analysis revealed the characteristics that predict higher life satisfaction include being in better health, satisfaction with ministry efforts, positive feelings about where they served, financial stability for retirement, and current relationships.” In describing their overall health, 72% say they are active and healthy, while 14% say they have physical disabilities that limit them, and 12% say their spouse has such limitations.

Around 4 in 10 (41%) agree having more help with their own health or the health of someone they care for would help at least a little.

Retirement age ministers are most likely to say information, tips and best practices for maintaining good health would help the most (25%), along with financial assistance (21%), and Medicare supplementary insurance (19%).

“While many retire from ministry in good health, aging brings with it healthcare needs for pastors and missionaries,” said McConnell. “Some are sidelined by health needs, and others could use financial help for medical care.”

Most older pastors, ministers and missionaries say they have close relationships that allow them to share problems, but some may be facing loneliness.

Among those who are currently married, 93% say their spouse is very satisfied with their marriage.

When asked about meeting with someone at least once a month to openly share struggles, 61% of those surveyed say they talk with their spouse. A third (33%) meet with a close friend, 19% talk to a Bible study group in their church, and 3% meet with a counselor.

A quarter (26%), however, say they don’t regularly meet and share with any of these.

Around 7 in 10 (69%) say they have at least three close friends with whom they see or speak with at least once a month, with 17% saying they have 10 or more.

Still, 21% say they see or talk to one or two friends, and 10% say they don’t have any friends outside of family that they meet with at least once a month.

The vast majority say they have continued to make new friends in recent years (86%) and have many close relationships at their current church (68%). Still, 29% say they often feel lonely or isolated.

Most (58%) say they currently live near their children, 42% live near most of their friends, but 22% say they don’t live near either.

Around half (48%) agree if they had more help connecting with new friends it would help improve their overall well-being at least a little. A quarter (25%) say it would not help at all.

More retirement age ministers say they would benefit from making friends who have had a similar experience in ministry (25%), making friends who live near them (23%), and relating to a church in which they are not in leadership (20%).

Three-quarters (76%) of retirement age ministers are confident they will have enough money to live comfortably through retirement, with 31% saying they are very confident.

Still, almost half (47%) say they are often concerned about the financial security of their family and 27% say their physical needs or those of their spouse have caused significant financial strain.

Virtually all retired ministers (94%) receive Social Security benefits. Around 3 in 5 (59%) have a pension plan with their current or former employer.

Those who have debt were asked how much debt their household has outside of their mortgage. A quarter (25%) say they have no non-mortgage debt and an additional 53% say they have less than $30,000, including 28% having less than $10,000.

Almost 3 in 5 (58%) say if they had help with their finances it would improve their overall well-being at least a little.

Retirement age pastors and missionaries are most likely to say they need help managing retirement funds (22%), finding work suitable for retired ministers (17%) or learning how to stretch their current resources (16%).

“The fact that most pastors and missionaries feel financially ready for retirement doesn’t negate the fact that a quarter are not in a good position,” said McConnell. “Health issues have complicated the financial picture for many of those with financial strains.” Among those who are currently retired, 76% say they were prepared for the adjustment to retirement. Seven in 10 (70%) say the transition was easy.

The most common approaches to preparing for the transition were speaking with others who had retired (46%), reading articles on the topic (42%), or attending a retreat or conference for those nearing retirement from ministry (26%). One in 5 (20%) say they did not prepare for the transition at all.

Still, 33% say they have struggled with the adjustment, and 28% feel they lack purpose since they retired from the ministry.

Almost 2 in 5 (39%) say they have had to rethink their sense of value and worth since retiring and 27% say that retirement forced them to think about their value to God. When asked an open-ended question about what advice they would give those retiring from the ministry in the future, those currently at retirement age most frequently said to save and plan financially (13%), plan ahead (10%), enjoy and embrace retirement (8%), be prepared (7%), find opportunities to volunteer or serve (6%), stay active (4%), trust God (4%), pray (4%) and develop interests or hobbies (3%).

Shepherd’s Fold Ministries’ Van Hook said the number one piece of advice they would give to those planning for retirement from the ministry would be, “Don’t do nothing.

“We learned that just a little bit of action goes a long, long way toward increasing long-term well-being,” said Van Hook. “You’re in this ministry for the long haul, why not invest in your long-term well-being? Momentum builds quickly, so do something today.”

Retirement age ministers also volunteered some ways ministries can best help those like themselves, such as opportunities to serve or minister (16%), a pension or retirement plan (7%), financial planning or assistance (5%), include them (5%), offer seminars, workshops or retreats (4%), opportunities to stay active (4%), keep in touch with them (4%), offer encouragement (3%), show appreciation or recognize them (3%) and provide resources (3%).

For churches and ministries looking to better serve retired and retiring pastors and missionaries, Van Hook said there are two primary ways they can reach out.

“The first way is to partner with the growing number of ministries and resource centers that exist to help retired ministers,” he said. “Secondly, simply communicate with retired ministers and listen. Those actions will go a long way to making them feel appreciated.” 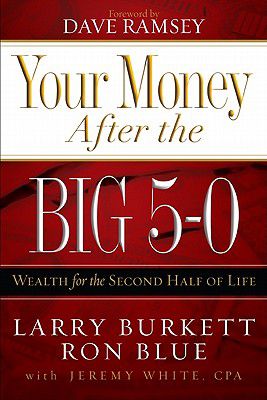 Your Money after the Big 5-0: Wealth for the Second Half of Life

Previous Post: « 7 Truths That Ignite a Passion for World Missions
Next Post: 3 Occasions When Pastors Should Expect Mental Struggle »