As a singer and songwriter, author, and film producer, there’s no mistaking Andrew Peterson as a creative person. The mistake lies, Peterson says, in thinking you aren’t.

In his new book, Adorning the Dark: Thoughts on Community, Calling, and the Mystery of Making, Peterson insists that creativity isn’t reserved for a few select individuals, but that every person is creative.

And for Christians, he says, the act of creating is also tied to redemption—bringing healing to the world and glory to God.

Peterson recently met with Facts & Trends to share how pastors and ministry leaders can lean into their creativity while also nurturing a creative community within their churches.

How can pastors be faithful to the exposition of Scripture while also using their God-given creativity?

My job as a songwriter, or at least part of it, is to try to wake people up to how beautiful the gospel really is. But I have the luxury of refining my songs and fine-tuning my intros since I play the same songs night after night. Pastors, however, don’t really get to do that. I bet they’re even more aware of the terror of the blank page than I am.

As a pastor’s kid, I was amazed from a pretty young age that my dad could come up with something new to say every Sunday.

It’s like he was writing an entire album every week. That’s hard to do. It’s hard to keep coming up with new approaches to the old, old story.

All that to say, I’m speaking a little out of my depth. But I believe that anytime you sit down to write anything at all you’re accessing a part of your God-given creativity.

Marrying that creativity with scriptural fidelity means balancing the agenda of wanting to wake people up to the gospel and talk to them about what you’ve learned about God’s Word, but doing so with a sense of humility and a willingness to be led by the Holy Spirit.

Yes, obviously you’ve got something you want to say, but during the writing you’ve got to hold onto it loosely. Allow yourself to follow the Spirit in writing the sermon so that it can surprise you.

I’m not saying that this is easy. It’s really, really tricky to do, and I don’t think songwriting and sermon-writing are really all that different.

How do you think pastors and ministry leaders might benefit from the themes you tackle about “serving the work” and “serving the audience?”

When I talk about serving the work, what I mean is this: the thing you’re making has a will of its own, in a sense. You have to allow it to become what it wants to be.

Now, I’m not talking about some weird, creepy, magical thing. It really comes down to the posture of the person who’s doing the making.

When we create, we need to ask ourselves if we’re just trying to make ourselves look cool and smart. That’s like bullying a thing into the shape you want as opposed to humbly midwifing something into existence.

So that’s serving the work. But you also have to serve the audience.

That means simple things like intentionally avoiding the use of a word that makes you sound smart or just tickles your own fancy in order to generously and hospitably convey an idea to people—because the idea is more important than you are.

Not to overuse the midwife analogy, but you should try to become a midwife and not the baby that’s being born.

There are plenty of times in my own songwriting where I can look back and tell I was geeking out over a turn of phrase or how clever my rhyme schemes were rather than thinking about how to best love my audience.

From a hymn-writing or sermon-writing standpoint, one’s job is to love the audience well by getting out of the way.

I’m not saying you don’t bring yourself to the work, and I’m not saying we should dumb things down; I’m just saying I know I’ve been guilty of showing off because I like words and I have some aptitude for playing with them.

And I know the difference in my own heart when I let my love for the craft trump what it is I’m trying to say.

That’s part of the power of the writings of C. S. Lewis. I don’t know if you’ve ever read some of his academic writings, but the dude was smart. He knew stuff.

But I don’t ever feel dumb when I’m reading Mere Christianity or The Screwtape Letters. I feel like Lewis is loving me well by taking these really big ideas off the top shelf and making them accessible to the rest of us.

In Adorning the Dark, you write about the importance of community in the creative process. How do you think churches can nurture this kind of creative community?

The story that immediately pops into my head is about the church we attend here in Nashville. It’s a church plant not far from us, and when it started, it was 60 or 100 people.

My daughter Skye was twelve years old when the church let her sing with the music team. Sandra McCracken was the music leader, and she kind of took Skye under her wing and gave her room to flourish.

My son Asher learned to play drums in the context of the music community at the church.

And then there’s my oldest son Aedan, who’s an amazing visual artist. He plays some music, too, but the art isn’t as easily put to use in church service, but I remember once when our pastor was preaching a sermon on the Trinity.

He contacted Aedan, who I think was 16 at the time, and said, “Hey, will you come up with a painting of the Trinity for me?” Now, that’s a tall order. How do you paint the Trinity?

But it invited Aedan’s gift into the story of our church. We really didn’t know what the pastor had planned, but I walked into church one Sunday and the painting was on an easel next to the podium.

The preacher referenced the painting several times over the course of the sermon and even took the painting down and passed it around to be admired by the entire congregation.

I get a lump in my throat just thinking about it. What a tremendous difference this would have made to me as a sixteen-year-old! It never crossed my mind when I was sixteen that my gifting could be put to good use in the Kingdom.

I didn’t think about ministry at all when I was a kid because I knew I liked comic books, Spielberg movies, fantasy novels, and rock and roll.

And so I figured I’d never be a part of ministry. It just hadn’t occurred to me that there was a seat at the table for nerdy kid like me.

It’s up to the leadership of the church to keep their eyes peeled and to think up things that make space for their members’ gifts.

It’s not as simple as saying, “Hey, you’re really good at that.” It’s coming up with a way within the life of the church to invite them to flourish with their gifting.

So the church is a built-in creative community. It’s a garden where our gifts can grow best.

Adoring the Dark: Thoughts on Community, Calling, and the Mystery of Making is available now at LifeWay.com. Peterson is also releasing this year a new re-recording of his classic Christmas album, Behold the Lamb of God, which is available for preorder now. 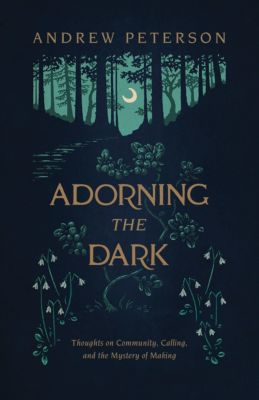 Adorning the Dark: Thoughts on Community, Calling, and the Mystery of Making