When I was a senior, there was a girlfriend in the picture. Isn’t there always?

I’d been dating her for almost year, and naturally, she was way up my priority list. She was headed to LSU, nearby in Baton Rouge. I wasn’t interested in North Carolina girls—this was the only one who counted.

She confronted me, “Robby, you can’t go that far away! Can’t you find somewhere a little closer to home?” And you know, when your girlfriend says it to you, in just the right tone of voice, you’re likely to do almost anything.

You’re Likely to Do Almost Anything

I began to think about nearby colleges that had basketball programs. It was very late in the recruiting game, of course; the important schools had filled out their rosters. But I figured a Division I prospect like me could get some interest from a smaller NAIA program.

I got out the phone book and called William Carey College in Hattiesburg, Mississippi—a simple ninety-minute drive. I didn’t know a great deal about Carey, just that it had a basketball team and wasn’t far from my girlfriend. I called the head coach and told him my situation. He hesitantly agreed to look at me in a tryout session—the team was already set.

But something strange happened at the tryout: I played well—that is, I played really, really well. As if the spirit of Michael Jordan got into me for an hour. Afterward, Mom said, “I’ve seen every basketball game you’ve played, and a lot of the practices, and you’ve never played like that—ever. You must really like this girl!”

Coach was all smiles. It didn’t take him long to offer me a scholarship to play for the William Carey Crusaders. I called UNC-Greensboro and let them know I had a change of plans.

One simple, impulsive decision had vast implications. The irony was that two weeks after school started, my girlfriend broke up with me—having gotten the mistaken idea that I was cheating on her.

Her reasoning was that I wanted to purchase clothes at the mall, something I hadn’t done before. If I’d wanted to cheat on her, I’d have gone eleven hours away! She was the whole reason I was here playing for an NAIA school instead of one that could be invited to March Madness.

But I took stock of my new home—a very Baptist new home.

My entire culture growing up was so thoroughly Catholic, I didn’t even know a Southern Baptist, and now I was surrounded by a whole army of them.

William Carey is named after the Father of Modern Missions, who lived in the eighteenth century. I was in a whole new subculture. There was no casual drinking. No Thursday night Frat parties. Faith was more overt, and I found myself to be the number one target of a campus game called “Convert the Catholic.”

I made a visible target, cruising through the campus in my red 944 Porsche, blaring uncensored Tupac tracks from the ten-inch bazooka subwoofers in my trunk. I always had a nice car because of my dad’s occupation.

I had brought my rap music, my alcohol, my sports car, and especially my Roman Catholic affiliation to this new Baptist world. For the first time, I knew what it was like to hold down first place on every local prayer list. Or to be a deer during hunting season.

I could see the Bible and tract

I’d be walking to campus, and a vague acquaintance would approach me. “Hey, Robby! Wait up!” I could see the Bible and the tract in his hand.

“Cool. Hey, if you were to die tonight, do you know where you’d—”

I Made My Escape

I’d duck into a doorway—didn’t matter which doorway—and escape another barrage of earnest gospel invitations. I couldn’t understand this whole witnessing culture.

All these people hardly knew my name, but they were intent on asking me to walk away from how I was raised and take on their form of religion. Catholics didn’t operate like this; you were born into it or you weren’t. When people asked me if I was a Christian, my go-to response was, “I’m Catholic.” End of story.

But I liked the school, and being the evangelism target didn’t put me off too much. I simply avoided it and lived my life.

Except for Jeremy Brown

Jeremy was the asterisk in the big conversion quest. Jeremy had a whole different approach to sharing his faith with me, and amazingly, he was the only one who seemed to have figured out the right formula.

He offered friendship instead of an evangelistic sales pitch. Jeremy took the time to get to know me and let me get to know him, just the way any college buddy would.

He cared about me rather than my religious scalp.

Occasionally, he would mention some aspect of his faith, not as a weapon aimed at me, but as a part of the whole world of Jeremy Brown—a world where I enjoyed hanging out. It made his faith intriguing instead of annoying. It was contagious.

“I know you don’t have a deep, daily faith in Jesus Christ,” he said. “You were raised in the church and taught about Jesus, but that’s not exactly saving faith. There has to be a time when you go from death to life. It’s absolutely necessary for eternal life. It’s all about saying ‘yes’ to him with everything you are. Not to mention you avoid hell by going to heaven when you die.”

“Sure, but Jesus wants to have a real relationship with you—not just something your parents did when you were too young to understand. Saving faith comes from the heart. You and I are friends because we chose it. That’s why it’s a real friendship, something we live out every day. Friendship is active and real. So is a saving faith in Jesus.”

“I get that, too. It makes sense. But how do you do it exactly?”

“If this is something you really want, Robby, if you understand that sin is a part of your life, and you can’t handle it alone, you can cry out to the Lord through repentance and faith. All you need to do is pray a simple prayer, like the one I’ll give you, and mean every word. Robby, do you think you’re ready to pray that kind of prayer with me?”

“You’re really sure about this? It’s serious, man.”

He prayed, leaving spaces after each phrase for me to repeat. I acknowledged my sin before God, my need for his forgiveness, and asked Jesus to save me. Afterward, he gave me a big hug and welcomed me into God’s kingdom.

And for several days, I figured I was just like Jeremy and all the “Carey Christians” now. He led me along, took me to church, and I did all the things I felt I was supposed to do.

What I lacked was something greater than “magic”—the supernatural effect, the transformation of new birth. My commitment wouldn’t last, and in time I would understand that the test of real faith is fruit.

Jesus said you tell a tree by what it produces, and what came out of my life wasn’t the fruit of godliness. I was a good kid from a good family, but still lost as lost could be.

Yet the seeds had been planted for that tree of eternal fruit. Someday the seeds would sink into the soil, and the real transformation would come.

ROBBY GALLATY (@Rgallaty) is the Senior Pastor of Long Hollow Baptist Church in Hendersonville, TN. He was radically saved out of a life of drug addiction on November 12, 2002. In 2008, he began Replicate Ministries to equip and train men and women to be disciples who make disciples. Excerpted and adapted from Recovered, Copyright © 2019 and published by B&H Publishing Group. 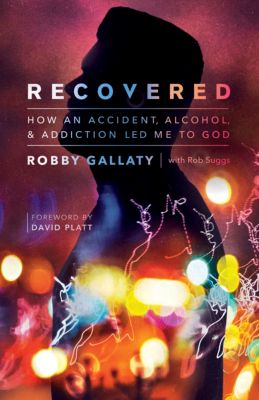 Previous Post: « 6 Unseen Burdens of Church Leaders
Next Post: When Is It OK to Walk Away from Toxic People in Ministry? »