I’m just going to get this part out of the way—I’m not an unbiased observer here. I teach the Old Testament for a living.

But if we can suspend all that for just a minute, I’d like to offer up three reasons why the Old Testament matters for the church today, in the hopes they’ll resonate with you too.

1. It Expresses Our Darkest Moments

I know I’m not the only person who grew up in an abusive home. In fact, I’ve learned recently that my experience, unfortunately, has been far from unique.

My stepdad was a deacon in our church, and he had a penchant for manipulation, violent outbursts of rage, and distorting the Bible to make sure we all fell in line. As you can imagine, years of this was hard to process once I finally became a Christian just before shipping off to college (well, driving off).

I found hope and solace in prayers like these: “God, knock the teeth out of their mouths . . . The righteous one will rejoice when he sees the retribution” (Psalm 58:6, 10, CSB) and “Daughter Babylon, doomed to destruction, happy is the one who pays you back what you have done to us. Happy is he who takes your little ones and dashes them against the rocks” (Psalm 137:8–9 CSB).

Maybe you’re appalled that I prayed this type of stuff about my stepdad. Sometimes I’m appalled too. But these Scriptures gave voice to the anger and rage within me. And they let me get it all out.

All my dark thoughts and feelings found expression in this collection of poems and prayers by God’s people for God’s people. If there are people like me in your church—and there probably are—then they need the Old Testament like I did.

They need ready access to voices of the saints who have suffered also. And they need to know it’s okay to bring their darkest thoughts to our Father.

2. It Exposes Our Darkest Parts

Jonah’s last words in the book that bears his name are, “Yes, I do well to be angry, angry enough to die” (Jonah 4:2 ESV).

This is his last retort to God, who patiently tries to get Jonah to understand that people matter more than plants and that God extends His grace to whomever he wills—including those Jonah would rather see die.

But that’s not exactly where the story ends. Reading the book of Jonah one day it hit me like a ton of bricks. My mom called to tell me that my stepfather had repented. That he was doing better.

I was livid. Angry enough to die, someone might say.

It just didn’t seem right to me that this guy—out of all the guys in the world—would get to repent instead of suffering God’s just judgment that I’d been praying for so long. And yet he did.

God had forgiven my stepfather, and now it was time for me to do the same. Everyone’s story with abuse differs, but mine involved coming to terms with the fact that God forgives people I wish He wouldn’t.

And that’s God’s prerogative, because he is, well, God.

Whereas all manner of good preaching on loving enemies, turning the other cheek, and forgiveness couldn’t move me to forgive, this short narrative in the Old Testament did.

The Psalms gave expression to my anger and pain, and Jonah held up a mirror to my unforgiveness. One expressed my darkest thoughts; the other exposed my darkest moments.

A brief clarification: If you’re an abuse survivor, I am not saying or even implying that you must “forgive and forget,” as if forgetting were even possible. And I’m certainly not saying or implying you should place yourself back in an abusive situation.

Forgiveness? Yes, as God works it in your heart. Forgetting? No, I don’t think so. It’s good and wise to protect yourself, and in many cases your children, from the risk of being abused. I also don’t mean your feelings of anger or rage are invalid or inappropriate.

I’m only saying that in my particular situation I was harboring unforgiveness that stalled my journey to healing and that was contrary to the gospel. This is a really short article, but if you want to hash all this out more, please reach out to me. I don’t have many answers, but I can listen.

I’ve spent a lot of time thinking through how I want to teach the Bible to my children. I don’t want them to think they have a relationship with God when they don’t, so I avoid saying Jesus is their friend and things like that.

When Jewish people celebrate Passover today, they recount the story as if they were part of it.: “God brought us out of Egypt. God rescued us from Pharaoh. God led us with a cloud by day and fire by night.”

God has grafted we Christians into His story. By faith, we are Abraham’s children. And so the Old Testament isn’t a story about them and those. It’s our very own story.

God delivered us from the flood. He rescued us from slavery in Egypt. He gave us the temple and tabernacle. Through his prophets he called us to live rightly.

He cared for us through the exile and captivity in Babylon. He reestablished us in the promised land after seventy years in Babylon. He sent his very own son to rescue us.

The Old Testament invites us to enter into the grand narrative of God’s redemption that began in the garden, was inaugurated on the cross, and will be completed when Christ returns. It’s our very own story, and oh the depth and wonder that is revealed in that story.

So I teach my kids these stories, and I tell them that these are their stories too, in a sense. These are the stories of their parents—and by faith in Christ they can become my children’s own stories as well.

RUSSELL L. MEEK (@russ_meek) is a writer, editor, and lecturer in Old Testament and Hebrew at Ohio Theological Institute, and earned a Ph.D. from Midwestern Baptist Theological Seminary. When he isn’t working, you can find him spending time with his wife, Brittany, and their three sons. 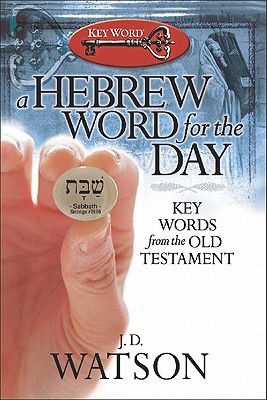 A Hebrew Word for the Day: Key Words from the Old Testament