“The Lord God took the man and placed him in the garden of Eden to work it and watch over it.” –Genesis 2:15 (CSB)

Since the beginning, work has been a core part of what it means to be human. God placed His people in a garden “to work it.”

They had purpose. Their purpose came straight from their Creator. And it was good.

The South Side of Chicago is no garden of Eden, but Chicago pastor Corey Brooks sees a connection between the ancient, God-given gift of work and the postmodern tragedy happening in his neighborhood, where hope can be as scarce as a good job.

“The number one problem is a sense of hopelessness that so many individuals have, especially young black men between the ages of 13 and 25,” Brooks says. He lists fatherless homes, broken schools, and a lack of job opportunities as root causes.

“You put all that together in one place, and that’s a powder keg waiting to explode. That’s what we see happening every single day on the South Side and the West Side of Chicago.”

The Great Cities Institute at the University of Illinois at Chicago showed Woodlawn had a 22 percent unemployment rate in 2014 (the latest year for which a report was available), with 16 percent of adults lacking a high school diploma.

In Englewood, almost 40 percent of residents were unemployed, and nearly a third of the population didn’t finish high school.

These same neighborhoods are covered with crimson dots on maps tracking Chicago’s homicides. While the city’s infamous murder rate is slowly trending in a good direction, the poorest communities are still overrun with violence; 55 people were shot—10 of them fatally—during a single weekend in Chicago this past summer.

As the sounds of gunshots and sirens ring out like an ongoing playlist, Brooks and his congregation are determined to shine the light of Christ into the bleakest parts of their city.

“We refuse to go anywhere until we make this neighborhood a better place,” Brooks says.

“The Rooftop Pastor” once spent 94 nights on top of an abandoned South Side motel—in the middle of winter—to draw attention to gun violence.

Brooks says he spent many hours talking to God during those cold, sleepless, and heart-pounding nights. He especially remembers New Year’s Eve: “I heard so much gunfire it sounded like a war zone.”

It was a sobering way to ring in 2012, but good things were coming. Brooks’ bold act drew national attention and hundreds of thousands of dollars in donations. The motel came down, and Project H.O.O.D. was born.

The 501(c)(3) nonprofit is an outreach of New Beginnings Church. “H.O.O.D.” stands for “Helping Others Obtain Destiny,” and the ministry hinges on the holy union of work and the gospel.

But having a good job, Brooks says, isn’t enough.

“There’s an area of our heart that no job can fill. The only person that can fill that void in our hearts is Jesus. The Bible teaches, ‘What does it prosper a man to gain the whole world and then lose his soul?’”

With that truth at the heart of its mission, Project H.O.O.D. is leading South Side residents to eternal hope in Christ—and simultaneously demonstrating the gospel in a tangible way as it attacks the root causes of poverty and violence.

Brooks says 210 people have found work in the last three years through the ministry’s job fairs. Project H.O.O.D.’s construction school has seen two rounds of graduates, with a 93 percent job placement rate. And the ministry itself is a job provider: it’s currently employing 11 ex-felons.

“Those individuals probably would not have been afforded another opportunity outside of our church,” Brooks says. “We have guys who have spent time in jail for over 20 years, and they’re working here, and they’re diligent, and they’re faithful to the work.”

Alfred Creamer is one of them. He was once well known on the South Side as a high-ranking gang member and drug dealer. When the FBI caught up with him in 2004, he went to prison for 11 years.

Creamer was 32 when his sentence began. By that time he had collected 11 bullet wounds. He was also the father of four children including a 2-year-old boy, Almani.

When Creamer was nearing the end of his sentence, Almani was killed in a car accident.

Creamer started acting out and landed in solitary confinement—something he would later say was the best thing that ever happened to him, because it led him to pick up a Bible and encounter Jesus.

When Creamer got out of solitary, he learned a local church had held his son’s funeral, free of charge. He vowed to thank the pastor the day he got out of prison.

The pastor was Corey Brooks, and he told Creamer to come see him if he ever needed a job. When Creamer learned about Project H.O.O.D., he had a burning desire to help stop kids from making the same mistakes that landed him in prison.

After completing the ministry’s discipleship program, Creamer started mentoring youth through ProjectCHOICES, a program for young men and women who have been arrested.

He refers many of the teens to the ministry’s alternative high school, which primarily serves students who have been kicked out of Chicago Public Schools.

In June, Creamer watched 132 students graduate. He was bubbling over with joy.

“Some kids who were ready to give up, now they’re able to walk across and get their diplomas,” he says. “Not a GED, but actually a high school diploma.”

For many of the students, a new world opened up the day they entered ProjectCHOICES. The program teaches them about career opportunities and job interview techniques, but the best part is exploring parts of Chicago they’ve never laid eyes on before.

“On Fridays I take them out in the community and show them different things and eat at different places so they can see how to hold a fork, how to hold a knife,” Creamer says.

“Their pants aren’t sagging and they don’t smell like marijuana. I teach ’em how to be well behaved and how to talk with manners and how to speak with people. If I take them up north, they feel as if they’re in another state, another country. They didn’t even know this existed in Chicago.”

A spark of hope ignites when young men and women from the South Side catch a glimpse of a different life. Many of them decide to put in the work to stay in school, get a summer job, and start earning a steady paycheck.

As more teens are inspired to go to work, Brooks says, a visible change takes place in the neighborhood.

“When you have a bunch of young men who are unemployed and they’re just hanging out, that type of idleness leads to some bad situations,” he says. “Now, they have to go to sleep at night to get rest to be able to go to work. That alone changes a whole lot.

“Every time we get some guys jobs—guys who had a lifestyle of being in the streets—one of the things they say is, ‘I can’t hang out. I’ve gotta go to work in the morning.’ We hear that all the time, and those are some of the best words to hear.”

As South Side residents, including former gang members and ex-convicts, start trading their time on the streets for time at work and church, others can’t help noticing.

“Those guys are taking classes, they’re being discipled,” Brooks says. “They’ve become husbands and better parents. They’re doing their part to make sure they make life better for everyone.

“Some of their friends and family members see an individual’s life changed and then they want it as well. When you have living examples, living epistles, it’s always a great way to share the gospel. In our culture you need to see living examples.”

As one of those living examples, Creamer thanks God every day for using him to help resurrect his community.

“We’re gonna turn this around,” he says. “My faith and trust that I have in God—I know what He’s gonna do with this neighborhood.

“Change is coming. I’m seeing it. We’ve got a lot of violence, but kids participating in gang activities are walking up to me and saying, ‘I’m tired, man. Is there something I can do?’

“They walk up to me almost every day, and I’m like, ‘Thank you, Jesus. Thank you. We got another one.’” 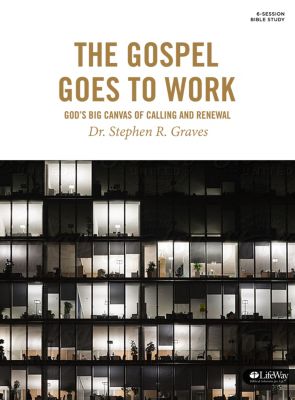 The Gospel Goes to Work: God’s Big Canvas of Calling and Renewal

Previous Post: « 3 Areas to Raise the Bar in Ministry
Next Post: 9 Questions To Ask Yourself Before Arguing Online »