Photo by Debby Hudson on Unsplash

Every church I’ve served has had ups and downs with attendance. Some seasons are times of growth—which are fun because the staff is energized, the congregation is happy, and you sleep easy at night.

Other seasons are seasons of decline—which can be maddening because the staff is stressed, the congregation is concerned, and you have sleepless nights.

Before you start putting together references or blasting out your résumé, let me warn you of five common mistakes church leaders often make when attendance declines.

For example, maybe you recently decided to begin a contemporary service for the first time at your church. It’s a bold and risky move, but you feel it’s the right thing to do to start reaching and retaining a younger age group.

Maybe some people are upset with the new style of music and start getting vocal about it, and you notice that the attendance is in decline. You may be tempted to stop this new initiative quickly and put everything back to the way it was before. Don’t do it!

If you started the new initiative correctly then you likely went through a process of research, experimentation, and healthy debate that brought you to the conclusion that this new initiative was the right decision. You have to give it time, even as much as an entire year.

Be willing to make adjustments if necessary, but don’t just jettison the initiative at the first sign of a problem. You should always expect decline when starting something new. It’ll take time for people to get accustomed to the change, for your team to work out the bugs, and for the community you’re trying to reach to hear about the new initiative.

Stopping prematurely looks a lot like panic. Instead, be patient and allow time for the new initiative to take effect.

This is what happens when you notice the attendance numbers starting to decline, but you choose to do nothing about it. If you notice the decline, others notice it as well. If you ignore it, people will think you are in denial or are being naïve.

Even if you’re doing everything right—God’s Word is being taught, the gospel is being proclaimed, and Jesus is being glorified—when the numbers start to decline it can make people wonder if something is wrong.

Rather than ignoring it, gather people you trust and ask them some questions like, “Are you aware of any problems that needs to be fixed?” Let them share any concerns or questions with you, then work together to come up with some solutions.

Another idea would be to hire an outside group to be “secret shoppers” at the church. There are a number of groups who specialize in this and it can be an effective way to get unbiased people with fresh eyes to come in and give thoughtful recommendations. They may even notice an old problem you’ve been ignoring.

Whenever there’s an idea or a problem some churches immediately add new staff members, complete with a new director, a full-time assistant, and a new intern.

The idea seems to be that hiring someone new to fix the problem is the best thing to do. But if your attendance is in decline, this is the worst thing to do.

When attendance decreases, tithes and offerings often decrease as well. In this case, adding additional personnel dollars isn’t going to help you. In fact, my observation is that the problem is usually tactical rather than staffing.

Look at how certain tasks are being performed. How are your guests being treated when they arrive? How is the parking lot traffic managed? What’s your system of follow-through with people who’ve requested prayer, sent an email, called the church, or visited on a Sunday morning?

When attendance declines, take some time to review your tactics and improve processes for how people are treated in all areas of the church. But whatever you do, don’t find someone to hire.

As I said above, attendance is directly related to tithes and offerings. The congregation notices when the numbers are down. They also notice how money is being spent.

When the numbers are down, tighten the spending on anything not essential until either the budget is adjusted according to the lower numbers or until the numbers begin to bounce back.

Don’t convince yourself that the new speakers, or the new video wall, or the new building will solve the problem and bring people back to the church. When attendance declines, fight the temptation to find something to buy.

This is a big mistake when attendance declines. Don’t let your insecurities take over and convince you that your declining numbers are the fault of the church down the street or the person who recently left.

Resist the urge to complain and criticize the person or the church, convinced that “it’s all their fault.” Instead, lead the way out of the problem. Whatever problem you’re facing, it’s crucial your church has strong leadership. Great leadership inspires people, but no one follows a panicky, whiny leader.

It may just be a season you’re in is giving you an opportunity to make some much needed improvements across the ministry.

BRIAN BOYLES (@brian_boyles) is the senior pastor of First Baptist Church of Snellville, Georgia, and serves as a consultant for Revitalized Churches. 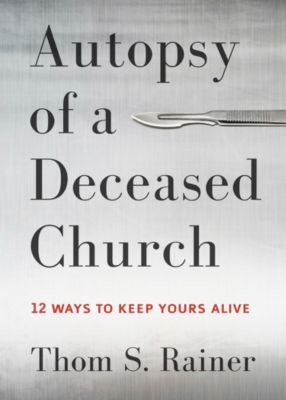 Autopsy of a Deceased Church: 12 Ways to Keep Yours Alive

Previous Post: « 5 Ways to Lead the Next Generation of Workers
Next Post: David Platt on What Needs to Change in the Church »