As a preacher, I want to do the hard work of sharing God’s Word as clearly and effectively as possible. Paul declares a similar desire in his prayer request to the church in Colossae:

“At the same time, pray also for us that God may open a door to us for the word, to speak the mystery of Christ, for which I am in chains, so that I may make it known as I should” (Colossians 4:3-4).

As I press into this desire to develop as a skillful preacher, here are three things I’m learning and applying.

1. Focus on a Central Theme.

It’s critical to develop a central theme in each of your sermons.

The text you’re preaching from may address multiple issues, but you must determine the central theme from the text to proclaim from the pulpit.

I’ve observed how impactful having a central theme is from other preachers but also from some of my favorite podcasts. Most of the podcasts I listen to are about thirty minutes in length, but some long-form podcasts range from one to two hours.

The best podcasts, whether short or long, have a central theme carried throughout the episode. Having one main theme helps to preach God’s Word as you should in a way that will be memorable to your congregation.

2. Bring Clarity to the Pulpit.

Second, do the hard work of pursuing clarity in your sermons. The Bible is a complex book that tackles deep theological matters, presents linguistic issues, and represents various literary genres.

When handled correctly, these topics can be both enjoyable and challenging to students of the Bible. The temptation as a preacher, though, is to avoid the complicated in favor of the simplistic.

A mistake I made early in my preaching ministry was to think that my congregation wasn’t interested in complicated issues found in Scripture passages. However, this was really a reflection of my own unwillingness to work through the hard issues in order to preach them clearly.

In avoiding complicated matters, not only did I diminish the whole counsel of the Lord, I arrogantly dismissed the people I was called to love and equip. I was convicted of my pride by listening to other preachers work through complex matters. I observed that not only did they embrace the complex, they worked hard to make such passages clear to their listeners.

Your people, like my own, address complicated matters almost every day of their lives. By just tuning into the first ten minutes of the evening news, your congregation follows health crises, financial disturbances, and international politics.

Your congregation isn’t opposed to engaging matters of complexity as much as they’re resistant to hearing them presented in an unclear fashion. The old preaching adage says, “A mist in the pulpit is a fog in the pew.”

Do the hard work of pursing clarity for the sake of your people.

Finally, be yourself. There’ve been times I’ve been so overly concerned about exegeting the text and delivering the message in the right way there was no personality left in my proclamation. Powerful preaching is Christ-centered and personable.

Your people want to know the truth of God’s Word, and they also want to see it worked out. The latter is revealed in preachers’ lives as they reveal honesty about themselves during the message. Use your voice and the experiences God has granted to in you in your preaching.

After all, God called you, not some other personality inhabiting your body, to the pulpit ministry.

As preachers, we never fully arrive. God is constantly refining our skills in the pulpit. I’ll spend the entire ministry the Lord allows me to have laboring to become a better preacher.

I’ll do the reps and fine-tune the craft of preaching in order to make known the mystery of Christ. 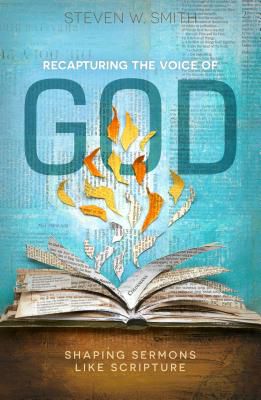 Recapturing the Voice of God: Shaping Sermons Like Scripture

Previous Post: « What the Single Adults in Your Church Might Be Wondering
Next Post: 4 Practices to Help You Discern Between the Holy Spirit and Leadership Gurus »