The Sunday after Dr. Martin Luther King was assassinated, like a hundred thousand other pastors across this land, my sermon addressed the subject of racism and how it was killing this country.

In the middle of the message, a woman stood to her feet and walked out of church. She called my home that afternoon to register her unhappiness.

“We come to church for peace and quiet,” she said, “not to hear the week’s news replayed.”

She was in church looking for peace and quiet? Probably the last place on earth to find that if it is being obedient to the mandate of the Lord Jesus, so said, “I did not come to bring peace, but a sword” (Matthew 10:34).

Leading a church isn’t always the safe, cushy job some might expect. Sometimes as a result of the stands they take, the messages they teach, or simply the love they show, church leaders wear a target on their backs.

In a biography of her father Roland Q. Leavell, my friend Dottie Hudson tells of the time her father preached a most difficult sermon to his small-town Mississippi church. It was the 1920s and a young black man had been hanged.

The next day, a group of sympathetic citizens found the body, took it down, and carried a piece of the noose into town. A storeowner identified it as rope he had sold to some prominent businessmen the day before.

In He Still Stands Tall, Dottie writes, “The leaders of the mob were for the most part members of the church where Roland was pastor. Many local people thought that a good deed had been done. Roland did not, and his conscience could not allow him to be silent the following Sunday.

“His sermon on Sunday included these words: ‘Any man who masks is a coward. If he will do in a crowd what he would not do alone, he is a coward. No doubt, lynching is murder. Children in this town have murderers for fathers. Lynching cannot be justified under any circumstances.’”

Some of the most prominent men in the congregation got up and walked out in the middle of his sermon. Dr. Leavell—later to become longtime president of New Orleans Baptist Theological Seminary—did not remain at that church much longer.

Sometimes a church leader should measure success not by the number “coming forward,” but by how many get up and walk out. Our Lord watched as the rich young ruler walked away and didn’t second-guess Himself.

When the disciples told Him certain ones were offended by His preaching, Jesus said, “Let them alone; they are blind leaders of the blind” (Matthew 15:14).

Perhaps the riskiest, most essential thing to do is preach the Word.

Those who want cushiony, safe careers wouldn’t be happy in the ministry. Our Lord said, “I send you forth as sheep among the wolves” (Matthew 10:16).  He said, “Blessed are you when they revile and persecute you … for so they persecuted the prophets who were before you” (Matthew 5:11-12).

I asked my friends for suggestions on risky and/or crucial jobs leaders must do. Here are their responses.

It got the Lord’s disciples martyred. In many parts of the world, preachers of Jesus still pay the ultimate price.

Confronting a powerful person who is hurting people or bringing shame to the Lord’s cause is necessary but has been known to cause upheavals within the congregation.

When I asked a pastor if he was afraid of a particular member who was causing him grief, he said, “No, but I fear the damage he could do.” Pastors have to weigh the risk.

To love the unlovely and care for the needy may mean getting down in the ditch at great expense and inconvenience to minister to their hurts. Life is easier and simpler for people who do not love those to whom they try to minister (an oxymoron, granted).

Giving the congregation your cell phone number is a risk. Many will use it, and not all will have discernment or respect concerning the pastor’s home life.

5. Advocate for justice and righteousness.

Particularly if there are local issues prominent in the news involving injustice and unrighteousness. People get so caught up in their anger and set in their positions, sometimes at the expense of their Christian faith, that those trying to reason with them run great risk.

Supporting some moral position that a vocal group has decided is heretical, anti-American, and ungodly. Or worse, liberal.

My single contribution to this suggestion is this: No pastor should try this alone. To do this successfully, the entire church must be involved in establishing guidelines and the leadership involved in practicing it.

7. Terminate a popular staff member who has become a problem.

Church members may not see what the staffer is doing that makes firing him necessary and the cost to the pastor for doing so could be severe.

8. Reach out to local minority groups.

Many a good pastor has been abused and even forced from the ministry for no greater wrong than bringing minorities into the Lord’s house. We say that to our shame.

We need to give people a means for registering their unhappiness.  Telling the leadership in an acceptable form is infinitely better than spreading their complaints throughout the community.

Risk assessment is a skill every successful leader needs.

What would be the risk if I were to do this?

Is there a tradeoff? Does the negative outweigh the positive?

Is it worth it?

Leaders always need to assess the risk of a potential action. If I were to lead the congregation to tear down the old building and erect a new one, would it be worth the hassle, the cost, and the disruption?

If we bring the churches of our community together for an outreach or ministry effort, will the opposition or criticism this provokes from some be worth it? If I preach on racial justice and some families leave, will Christ be honored—and will I still have a job?

“That hill is not worth dying on” is an expression many a young minister has heard from a grizzled veteran cautioning him against taking a stand on some issue of lesser importance.

“Choose your battles” and “a dog can whip a skunk but it’s not worth it” are also expressions of this ilk.

We have been sent into the world as sheep among the wolves. Let us stay close to the Shepherd.

Laypeople, pray for your church leaders.

Church leaders will decide for themselves. Not all will agree. But in the words of Romans 14:4, “To his own master (a servant) stands or falls.” 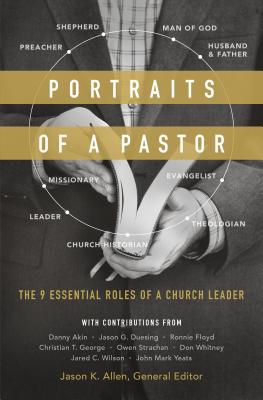 Portraits of a Pastor: The 9 Essential Roles of a Church Leader