A question that often remains unanswered about the story of the prodigal son is, why did the son leave in the first place? What motivated him to leave his father and depart for the sparkly, faraway land?

But according to Matt Carter, the burning question that the current generation wrestles with today is, Am I missing out on life’s best if I follow Jesus?

Carter, pastor of preaching and vision at Austin Stone Community Church, explores this question in his new book, The Long Walk Home.

The Long Walk Home details the story of the prodigal son from Luke 15, uncovering the reasons people leave the church for hope of a better life outside God’s love.

“The answer is that somewhere along the way as he was living there with his father, he’s looking in the city at the faraway land and he thought to himself, You know what? There’s a better life for me, outside of my father’s house,” Carter says.

He also says there are two groups of people who need to hear the message of the book.

The first is those who identify with the older brother in the story, the one who stayed home and was faithful.

“But,” Carter says, “at the end of the story we’re not entirely sure if he makes it into the party or not.”

The older brother is a man who needs God’s forgiveness just as much as the younger brother, but doesn’t realize it.

The second is the person that is hanging by a thread, who does realize they need God’s grace but doesn’t think God will take them back after failure.

“It’s the people who have taken the trip to the faraway land,” Carter says. “They think they’ve fallen so far that God won’t take them back.”

But that’s the point of the story, explains Carter.

“It doesn’t matter what you did; you have a Heavenly Father that’s waiting for you to come home, not to punish you or shame you, but to receive you with open arms. The reason that Jesus told this story, was for people just like that.”

The son in the story essentially told the father he wished he was dead so he could get his inheritance money right away and then he squandered it on loose living.

He went as far as you can go Carter says. He betrayed his father and sinned heinously.

But the father welcomed him home with open arms and a party.

Carter offers three ways pastors can address the questions of the current generation and proclaim the hope of the gospel to the lost people around them.

Leaders should start with creating an environment in the church through preaching and ministries and counseling where it’s ok to not be ok. The message is not that they should stay in a place of being “not ok” but rather that it is in fact ok to admit their struggles.

The wall in the way of this happening more freely, Carter says, is that those people who are respected and put in the public eye are the ones who seem to have it all together.

“The heroes that we put forth are the people who look like they have it all together and that they haven’t messed up,” Carter says. “I don’t think we tell enough stories or create enough heroes of the people who are still in the process of ‘man I’m struggling, but the Lord’s got me.’”

2. Create a culture of transparency.

Carter says to cultivate an environment of transparency leaders should be open and honest about their struggles—not to glorify sin but to identify with those they lead.

“I’m the guy on the stage but I don’t have it all together and I still struggle and wrestle every day and I need the grace of God every day,” Carter says.

“That healing actually comes when you’re able to admit that you have a problem and then seek help through other people in the church.”

Leaders should invite people into their story, their own prodigal son story, Carter says.

“We need to get back to a culture in the church where we’re teaching people the gospel,” Carter says.

“We’ve got to show people that we’ve failed and we are sinners. We can’t just talk about Gods love, but that God’s love is greater than sin, it doesn’t matter what you’ve done.”

Carter says leaders who are praying and hoping for the prodigals to come home should not grow weary or give up because if those they are ministering to are truly believers it’s only a matter of time before they begin to turn back toward the church.

“In every human being—whether or not they realize it or admit it—there is an eternal longing, and it can only be satisfied through the eternal, which is the Lord,” he explains.

“We try to satisfy that eternal hunger with the stuff of the world—with power and pleasure, comfort, approval and control—all these different things that we think might satisfy that need inside of us. But the only thing that can satisfy the eternal hunger that God placed in us, according to scripture, is God himself.”

Carter encourages leaders to never give up, because at the end of the day there’s no greater joy than to see lost sinners come back to Christ.

“We have the one message that’s the greatest story that’s ever been told or could ever be heard and that’s the gospel—that when we were enemies of God and were dead in our trespasses and our sins, God of the universe came and put on our flesh and died on a cross to pay for those sins.”

Leaders seeking to reach prodigals should never measure their success by numbers or any other standard, Carter says. Rather, they should measure success by faithfulness to proclaiming the gospel and trusting the Lord with the results. 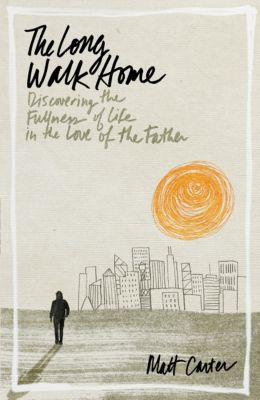 The Long Walk Home: Discovering the Fullness of Life in the Love of the Father

Previous Post: « 4 Ways Churches Can Increase Generosity During Budget-Approval Season
Next Post: 3 Reasons Your Church Shouldn’t Be a Perfect Fit for You »