Photo by Patrick Fore on Unsplash

When we think about the words of Jesus, we may remember His moral teachings or His declarations of divinity. We might can quote some of His prayers or descriptions of being born again.

But we may not realize how much Jesus spoke about leadership and how His followers can become better leaders.

One of Jesus’ most important lessons on good leadership came after His disciples completely misunderstand what leadership meant in the kingdom of God.

In Matthew 20, John and James’ mom came to Jesus with the idea of her two sons becoming co-vice presidents in Jesus’ new administration.

When the other disciples heard this, “they became indignant with the two brothers.” Why? Scripture doesn’t tell us, but we can easily guess.

The other disciples saw John’s and James’ pride. But they saw it so clearly because the same pride and desire for power was in their own hearts.

Recognizing this, in Matthew 20:25-28, Jesus spoke to them about what leadership should look like:

You know that the rulers of the Gentiles lord it over them, and those in high positions act as tyrants over them. It must not be like that among you. On the contrary, whoever wants to become great among you must be your servant, and whoever wants to be first among you must be your slave; just as the Son of Man did not come to be served, but to serve, and to give his life as a ransom for many.

We can summarize His instructions on leadership in three statements.

You know that the rulers of the Gentiles lord it over them, and those in high positions act as tyrants over them (v. 25.)

Jesus reminds the disciples, “You know that the rulers of the Gentiles lord it over them; they act like tyrants.”

That’s one way to do it. That’s the world’s way of doing it. Just remind people over and over again that you’re in charge.

Be sure to remind them—repeatedly—that you’re kind of a big deal around here. They need to know you call the plays and they’d better run them.

That’s one way to be a leader, but Jesus quickly goes on to challenge that method.

2. You should not imitate the world’s idea of leadership.

We should heed Paul’s words to the Romans: “Do not conform to the pattern of this world but be transformed by the renewing of your minds.”

This is one of the reasons people should want to serve alongside Christians. Jesus’ leaders don’t lord their authority over others.

They don’t consider themselves better than other people. Christian leaders know they’re an instrument in the hand of God, for as long as He sees fit.

I love the old words of Samuel Brengle:

The axe cannot boast of the trees it has cut down. It could do nothing but for thewoodsman. He made it, he sharpened it, and he used it. The moment he throws it aside, it becomes only old iron. O, that I may never lose sight of this.

But we do lose sight of this.

With success and promotion, we secretly begin believing the lie that if I’m placed in charge of other people, then God must love me more than them, be more proud of me than He is of them.

That’s how the carnal person thinks—that they’re indispensable, that they’re one of God’s gifts to the world.

It’s often been said, and it’s true: A man wrapped up in himself is a small package.

The world is full of people who are wrapped up in themselves, but Jesus tells His followers they’re not to be like this.

3. You should make yourself a servant.

On the contrary, whoever wants to become great among you must be your servant (v. 26).

Virtually every commentator and scholar of Matthew makes mention of Jesus’ word choice for servant.

Servant is from diakonos, from which the term deacon is derived. The original Greek word was purely secular, referring to a person who did menial labor, such as house cleaning or serving tables. It was not necessarily a term of dishonor but simply described the lowest level of hired help, who needed little training or skill.

Those last words stand out to me.

When Jesus said, “Act a like a servant, in essence, He was saying: ‘Go around treating people as if they’re smarter than you, as if they’re more experienced than you.’”

The antithesis is perhaps more obvious. Don’t go around reminding people you’re more insightful and more astute than they are.

Round down on yourself. Round up on others.

Here’s the craziest thing about Jesus’ style of leadership. It doesn’t make any sense, but it’s absolutely true.

When you make yourself small, other people will talk about the big presence you fill in their lives.

Jesus said, “Whoever wants to save his life will lose it, but whoever loses his life because of me will find it” (Matthew 16:25).

The same can be said of leadership. When we try to grab power and cling to it, we will also find it slipping through our fingers.

But the leaders who follow in Christ’s footsteps and serve others will always find people willing to serve with them. 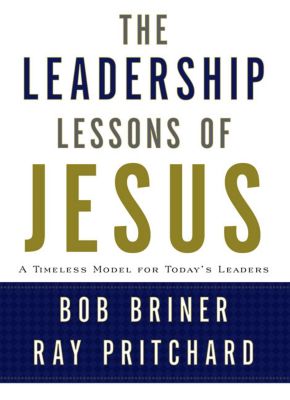 Leadership Lessons of Jesus: A Timeless Model for Today’s Leaders