The preacher must assess both the culture and the congregation in order to determine whether to engage certain concerns that arise. Clarity in this matter is essential, but how does the preacher gain such clarity?

Let’s consider nine questions that will serve as indicators for the expositor, helping you discern the extent of the concern and whether it should impact your upcoming sermon.

Does the problem, crisis, or concern on the minds of the church members move them to come to church hoping (and needing) to hear a direct and timely Word from the Lord?

Given the sensationalized and never-ending news cycle to which we are now afflicted, the key word is substantial. Are a substantial number of people affected in a substantial way?

2. Should this concern be affecting them?

Is the distraction legitimate? Many church members stumble into worship with earthly distractions.

Everything from college football and pop culture personalities and circumstances to the rolling events of the never-ending news cycle clamor for their attention. The last thing the preacher should do is give these issues legitimacy or draw attention to them.

To engage such is to forfeit biblical exposition altogether and become a topical preacher. Just because there’s an elephant in the room doesn’t mean one should engage it. Perhaps it needs to be ignored—or shooed out altogether.

3. Does this concern pose a threat to God’s people morally, doctrinally, or in some other way?

The faithful shepherd warns the sheep. This warning most commonly happens through the regular exposition of Scripture, but there are times when a more direct, timely word is needed.

Hence, it may be necessary to preach an isolated, expository sermon on the prosperity gospel, the historicity of Genesis, biblical sexuality, Supreme Court decisions, religious liberty, etc.

4. Does this concern necessitate a pastoral response of comfort?

The faithful shepherd not only warns the sheep; he also comforts them.

For example, in the context of the Iraq War, I pastored a church comprised of nearly 50-percent military personnel.

During the ramp-up to the war, when a number of our members were being deployed to combat, I interrupted my series and sought to preach a particularly encouraging sermon from the Psalms.

In the aftermath of the Supreme Court decision legalizing same-sex marriage, the sermon most needed by the congregation probably was not one of rebuke against the world but of hope in God and a reminder that Christ is building His church.

5. Does the preacher need to inform the church of a hazardous issue or circumstance?

For instance, is there pending legislation on marriage or gender issues of which the church must be informed? Is there a forthcoming issue that will roil the congregation?

Events such as church or cultural sex scandals, abortion news, or U.S. Supreme Court decisions may necessitate the preacher to inform his congregation or interpret the issues for them.

Additionally, internal issues may merit direct engagement. Issues like disunity in the church, sexual immorality, or some knotty case of church discipline may necessitate interrupting the sermon series.

6. Is there a clear connection between the concern and a specific text?

For instance, when presidential elections approach, issues like taxation, health care, states’ rights, and a host of other issues will dominate the headlines, most of which would be a stretch to engage from a scriptural perspective.

7. Has this concern come to the preacher?

Though I have argued the need for a preacher to have an antenna, the biggest concerns will surely find him. Are God’s people, in essence, clamoring for a Word from the Lord?

8. Is there a biblical “therefore” to the text and the concern?

Does the Bible not only reference the concern but also speak to it?

For example, as to the issue of marriage, we not only point out what it is not—same-sex—but what it is, the conjugal, covenant union of a man and a woman created to mirror the relationship between Christ and His church.

9. Are you moved by principle or just wanting to break the boredom?

If the impulse to interrupt the series is to alleviate boredom, then the preacher may have bigger issues.

Be wary of interrupting the series for anything less than a true congregational or cultural urgency.

JASON K. ALLEN (@jasonkeithallen) is the resident of Midwestern Baptist Theological Seminary and Spurgeon College. Excerpted from Letters to My Students Copyright © 2019 by Jason K. Allen. Used by permission from B&H Publishing Group. 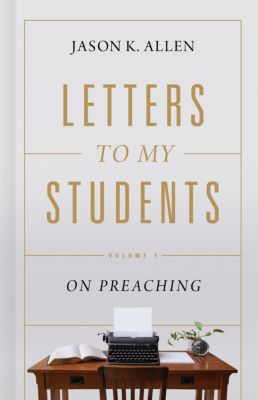 Letters to My Students

Previous Post: « Is Your Church Making Incomplete Disciples?
Next Post: The Power of Prayer in Church Revitalization »