American Protestant churchgoers say God is on their mind throughout their day in both intentional and impromptu moments.

The 2019 Discipleship Pathway Assessment study from Nashville-based LifeWay Research identified seeking God as one of eight signposts of spiritual maturity.

About 2 in 3 Americans who regularly attend a Protestant church (67%) disagree with the statement: “Throughout many of my activities I don’t think about God,” with 40% strongly disagreeing.

“A Christian has the opportunity to walk with God,” said Scott McConnell, executive director of LifeWay Research. “Most churchgoers affirm their thoughts are on God as they go about life’s activities.”

Women are more likely than men (45% to 33%) to strongly assert they’re thinking about God throughout their day.

African American (55%) and Hispanic churchgoers (51%) are more likely to strongly assert they regularly think about God during the day than white churchgoers (33%) or churchgoers of other ethnicities (32%).

Black Protestants (58%) are more likely than evangelical Protestants (40%) or mainline Protestants (27%) to strongly disagree they don’t think about God throughout many of their activities.

Around 2 in 5 churchgoers (38%) say they set aside time for private worship, praise or thanksgiving to God every day.

“Having an attitude of praise requires noticing who God is and what He is doing. This takes intentionality,” said McConnell. “Once we choose to observe His work, however, the thanks and worship come naturally.”

Female churchgoers (40%) are more likely than their male counterparts (36%) to say they set aside those moments every day.

African Americans (45%) and Hispanics (43%) are also more likely than whites (36%) or other ethnicities (31%) to have specific times for private worship, praise or thanksgiving every day.

Those who attend church at least weekly (40%) are more likely than those who attend less frequently (33%) to have set aside times for private worship every day.

Around three-quarters of Protestant churchgoers (78%) agree they find themselves praying at the spur-of-the-moment throughout the day, with 44% strongly agreeing.

“Who we turn to when we have good or bad news says a lot about our relationships,” said McConnell. “If we immediately want to share life’s ups and downs with God and ask Him for help and guidance, that demonstrates we value our relationship with Him.”

Around half of women who regularly attend a Protestant church (49%) strongly agree they find themselves praying throughout the day, compared to 36% of male churchgoers.

“Jesus opened the way for people to enter God’s presence through His death on the cross,” said McConnell. “As individuals respond to Christ’s call, they see Deuteronomy 4:29 fulfilled in their lives—when they seek God with all their soul, they will find Him.” 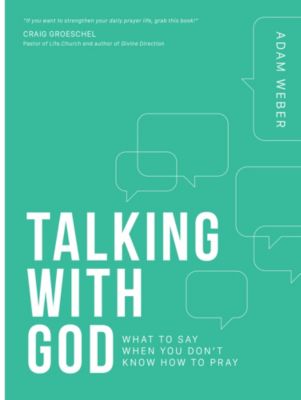 Talking with God: What to Say When You Don’t Know How to Pray

Previous Post: « 3 Reasons to Kill the ‘Lazy Pastor Myth’
Next Post: 6 Qualities of a Healthy Church That Motivate People to Invite Others »