In a preaching or teaching ministry, it’s inevitable you’ll have some bizarre things happen. I wanted to hear stories from others in the pulpit. So I asked for feedback:

Not surprisingly, I got dozens of responses from pastors, teachers, and congregation members. Here are some of my favorite bizarre—and mostly hilarious—stories about crazy happenings during sermons.

In college I was preaching to a student ministry with two students in attendance… both got up to use the restroom at the same time. Continued preaching to the empty room. No one responded to the message that night. https://t.co/hQqoPYoGRX

Our church did an anniversary service at a lake side and @tonymerida had a lady doing yoga on a paddle board behind him for about 80% of his sermon.

1. A student decided he didn’t like what Inwas saying so he came on stage with me and tried to wrestle the handheld mic out of my hands. No way he was getting that 🎙from me

The stage broke in two and completely collapsed. https://t.co/v3mplVAPvo

I was preaching at a revival & as I was giving the invitation, the cuckoo clock above my head started going off. Did not know it was there. A family had given it to the church 50 years previously & they put it in the auditorium in front of the church to honor that family.

The visiting missionary missed a step leaving the platform, fell forward, did a full-on shoulder roll off the platform, and landed at the foot of the front row.

Preaching a wedding. A lady in overalls with a buzz cut and a smokers voice kept yelling that “she objected” as a joke. I ignored her, but the groom finally said – “Shut up aunt Bertha!” True story. #MinistryInTX 😂

I puked in a live mic and then passed out. And then there was the time a brother lit his little sister's hair on fire. And the time our intern burned scones in the kitchen and set off all the fire alarms.

I was preaching and a lady in the back of the room says, “Preacher! I got a question.” I respond, “Yes ma’m?” I was not prepared.
Her: “DO YOU REALIZE OUR GOVERNMENT HAS BEEN LYING TO US ABOUT THE MOON LANDING?! WE AINT NEVER BEEN THERE!”
I never once mentioned the moon landing. https://t.co/gbwiXgP3eG

Church member came in mid-sermon looking for his lost cell phone in one of the pews. I stopped preaching and asked if I could help him. “Yeah, I lost my phone. Would you mind helping me look for it?” We didn’t find it. He left. We all laughed. I finished preaching. Good times.

Someone tried to break into a car in the parking lot. Men ran outside to stop him, surrounding his car, but he eventually ran into my father-in-law, driving with him on the hood for a bit in the parking lot before he got off. FIL wasn't hurt badly, but hard to finish after that.

A lady took a big drink of ranch dressing on the second row because, as she said "It keeps my throat from drying out" https://t.co/may2YG2W82

In church planting we had all kinds of bizarre things. One funny event was when an old man answered his phone and started talking. Loudly. This didn’t happen just once. But Twice. “I can’t really talk now preacher is preaching. What!? I can’t hear you speak up!”

mid sermon, a local wanderer (who had been around before) came in carrying a small suitcase. He walked all the way to the 2nd row & sat down. Then he got his coke & snack out of his suitcase like he was at the movies. Pastor tried hard not to chuckle.

I was preaching with my phone on the pulpit for keeping time and said the word “serious” to which Siri answered “How may I help you?”

The time my iPad went down and a senior screamed from the back, “now get a real Bible”. https://t.co/vyq0RTubCH

Guest speaker's phone rang in his pocket and he got mad and stopped preaching until "whoever was being so disrespectful" turned off the ringer.

A little boy about 5 years old picked up a hymnal, walked to the front beside me, faced the congregation (of about 15 people), opened his “Bible” and began silently mimicking my every move. https://t.co/kHEwFa9nQ9

Really loud bell dinged. Pianist got up and started playing me down. Preached for 15 more minutes

Social media—particularly on Sundays—can create the impression that everyone else has extraordinary services 100% of the time. You can start to wonder if anyone else is dealing with the same crazy things that occasionally happens at your church. This thread turned into a good reminder that “extraordinary” is a relative term.

What are some of your bizarre or hilarious stories from ministry? Share in the comments below! 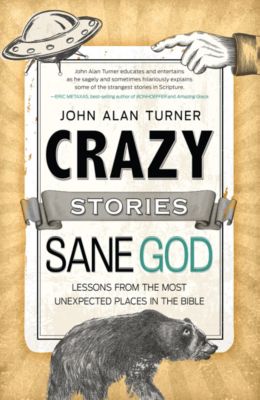 Crazy Stories, Sane God: Lessons from the Most Unexpected Places in the Bible

Previous Post: « 6 Steps to Become an Effective Witness for Jesus
Next Post: Mission: The Outcome of Devotion »