In “Overcomer,” a new film from Alex and Stephen Kendrick opening August 23, a young girl struggles to understand where her identity is grounded. Most Americans say they find their identity in relationships and achievements, according to a new study.

Nashville-based LifeWay Research asked 1,010 Americans about their sense of identity and what matters most about themselves. These are important questions to ask, said Alex Kendrick, director of “Overcomer.”

“There is an ongoing debate in our culture about who or what gets to determine our identity,” he said. “We believe the Creator gets to define His creation. When we find our personal identity in Christ, then that is the truest and most stable foundation we could have.”

Few Americans, however, say religion in general or faith in Christ specifically is at the forefront of their identity.

When asked the open-ended question, “When you think about who you are, what are the first three things that come to mind?” 8% say Christian. Fewer say religious/spiritual (2%), child of God (2%) or blessed (1%).

Most characteristics volunteered were positive or merely factual, but some Americans chose potentially negative traits as one of the first things that came to mind about themselves like lonely (4%), anxious (2%), overweight (1%), angry (1%), bored (1%) or poor (less than 1%).

“There is no single lens or identifier Americans use to think of themselves,” said Scott McConnell, executive director of LifeWay Research. “Ironically, that means the personal identity people have or seek may not be what others see in them.” When given a list of potential facets that could be “very important” to their identity, most respondents point to their role in their family (73%) and the good they do (57%). Around half say what they have achieved (51%) and their role as friend (49%) is vital to their identity.

When asked to choose the most important part of their identity, Americans are most likely to say their familial role (44%) is top among those characteristics that are very important.

Around 1 in 6 (18%) say their religious faith is the most important part of their identity. For 10% of Americans, the good they do is most vital. Fewer than 1 in 10 chose any of the other options.

“Family roles are vital and priceless,” said Stephen Kendrick, producer of “Overcomer,” “but not perfect or unshakable. Any time we base our identity on changing factors, we are setting ourselves up for failure and disappointment.”

His brother Alex agreed. “Unfortunately, family relationships can change. Divorce is too common. Children can become estranged. Crisis sometimes separates even the closest family connections. In other words, that cannot be your foundation,” he said.

“Family relationships work best when based on God’s love and design. When God is the priority and foundation, families are in a better position to flourish.”

The LifeWay Research survey also found Americans evenly split on the relationship between identity and behavior. “These two equally common perspectives on life have very different assumptions,” said McConnell. “Working to achieve a reputation presupposes you have less value unless you do. Seeking to genuinely live who you are assumes you had value from the start.”

According to Stephen Kendrick, people shouldn’t base their identity on what they do. “It’s so important that we know we are made in God’s image and loved by Him regardless if we are performing or not, working or resting, out in the field or sick in a hospital bed,” he said.

“Our titles or circumstances don’t determine the core of our identity. God loves us just as much whether we are out in the game or resting on the bench. If we think we only have value when we are performing, then we will struggle with our meaning or place in this world when our productivity falls short in any way.” 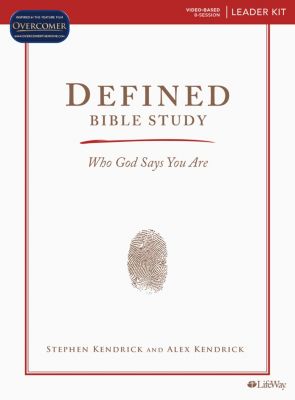 We do not define ourselves. The Creator does.

Previous Post: « 5 Counter-Intuitive Prayers For the Next Generation
Next Post: 5 Ways in Which Pastors Need to Stay Healthy »