Leading God’s people is the greatest work in the world. We’re doing things that make an eternal difference.

But it can also be high-risk—dangerous, even—when God’s chosen leaders take shortcuts and step over the line of what is right, wise, or acceptable.

I’m remembering a friend who belonged to the cult of the Moonies. Later, in a book on his experience, Chris Elkins said the leadership taught the mostly young and always gullible members that lying to possible converts was acceptable since the end justified the means.

They called it “holy deception,” and that became the title of Chris’ book and a movie that followed.

To the rest of us, it’s not “holy deception.” It’s called lying. God’s servants must be people of integrity and faithfulness.

I invited some friends to suggest some dangerous habits they’ve observed of church leaders (or perhaps they had once held one or more of these habits themselves).

They came up with these 10. You’ll have no trouble thinking of a dozen more.

1. Borrowing heavily from the sermons and writings of others.

The internet has simplified research for teachers and preachers, thus encouraging them to become lazy and let others do the hard work of studying, research, and prayerful meditation.

But for the faithful, there’s no substitute for reading a Scripture, spending hours and days studying and thinking about it as we go about our daily activities, and praying over it until the message it contains is given to us and—you’ll understand the expression—becomes “ours.”

Only when the Holy Spirit makes the message “yours” can you preach or teach it with power and effectiveness.

Whether from the internet or television or print material, nothing so quickly and totally pollutes the inner sanctum—the very center of our being—as these images of sexual immorality and perversion.

The mental pictures and memories remain for years, and will continue to pursue the child of God, long after they have confessed and been forgiven.  Let the child of God protect his heart.

It’s one thing to say a quick “thank you” to someone bestowing a compliment or gift, but often that is inadequate.

A note of two or three sentences will be kept for years. Leaders who fail to write thank-you notes are missing a great opportunity.

The Holy Spirit places a great value on a thankful heart.

On a similar note, we’ve all seen a leader stand before the church and begin to express appreciation to those who worked on a committee, cooked the supper, or taught the children in VBS.

Invariably, once they start naming names, they’ll leave someone out. It’s a given, I suppose. The experienced minister will never start naming people without a written list before them.

The Holy Spirit can use such simple encouragement as a person’s name being called by the minister.

5. Disregarding the church constitution and bylaws.

A leader may think they’ve found a more efficient way of getting things done, but they may be digging a hole they can’t climb out of. There may come a time when abiding by the constitution and by-laws will save the church a lot of time and trouble and save the minister’s job.

The leader who establishes a precedent of ignoring the bylaws will have nowhere to go.

In most cases, a predecessor paid a great price to get those bylaws in place. The wise leader will know them, honor them, and see that they are kept up-to-date. And if a change is needed, they will go through the right process.

A pastor who assumes the congregation will understand when he spends all his time in the study (producing those wonderful sermons) and fails to visit them in the hospital or at the funeral home will learn a hard lesson.

The Holy Spirit calls pastors to “shepherd His sheep.” That will require time among the congregation tending to their needs.

The leader who makes promises he doesn’t keep is failing God’s people and undermining His call.

He tells someone, “I don’t know the answer to your question, but I’ll look it up and get back to you.” He never does. Once he does that a few times, he earns a reputation as a dishonest person—or at best, unreliable.

I was 25 years old and in my second pastorate, when I told someone, “I’ll find out and let you know.” I was informed that the previous pastor would say that and never follow up. They needed to know they could trust their pastor. I made sure to keep the promise.

The Holy Spirit will not bless untrustworthy lips.

Now, that is not to say all social media is wasted time. But it’s possible to be addicted to the screens, small and large, and to be constantly checking one’s email or Facebook page.

These can be great resources, but they’re terrible masters.

Hint: If church members notice you always quickly answer comments or notes on Facebook or Twitter, they will assume you’re always on the internet.

The Holy Spirit gives you the same time He gives the rest of us; use it wisely.

Some pastors are loners. They don’t enjoy engaging in community with those they’ve been called to lead.

They also avoid leadership conferences and gatherings where they would fellowship with colleagues and peers. In so doing, they do themselves a severe injustice.

For good reason, our Lord sent the disciples out two by two. Romans 16 gives a long list of friends who made a difference in the life and ministry of the Apostle Paul.

The Holy Spirit has faithful believers ready to be our friends and colleagues in His service, but He won’t force them on us. We must ask Him, then seek them.

10. Viewing people as a means to an end.

When see people as tools to get things done, rather than the redeemed of God to whom we were sent as shepherd, we dishonor our Lord and abuse them.

The leaders who show favoritism to certain people because they can help our career or have deep pockets is a million miles from the spirit of Christ who loved the lowliest, the least, and the lost.

We are followers of the Lord Jesus Christ, who had time for a blind beggar of Jericho (Luke 18:35ff).

The Holy Spirit will give us a love for all His people.

Next time you’re with ministers, give them this list. Then, brainstorm on other dangerous habits of church leaders. We all need the reminders! 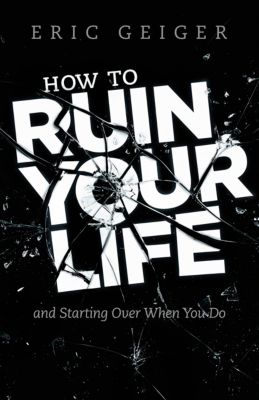 How to Ruin Your Life: and Starting Over When You Do

Previous Post: « 3 Things Church Planters and Pastors Must Remember
Next Post: 3 Ways to Cultivate a Congregation That Exercises Faith »