As a Navy chaplain serving in combat logistics, Trevor Carpenter has traveled on guided-missile destroyers and served with teams scouting for air assault attacks.

But for the past several months, Carpenter’s focus hasn’t involved ballistics and helicopters as much as it has Bibles and highlighters.

“I currently have around 70 Marines and their spouses digging into Scripture each week through the H.E.A.R. journaling method,” said Carpenter, who’s stationed at Marine Corps Base Hawaii.

“Being in the military, I’m a pretty programed guy,” Carpenter said. “So when I picked up a copy of the ‘Disciple’s Study Bible,’ I decided to go through its journaling plan as a self-guided Bible study. It became the meat and potatoes of spiritual growth for my wife and I while I was stationed [in Norfolk, Virginia].”

Upon being transferred to Hawaii, Carpenter said he met six young Christian Marines and their spouses who were part of a group that had been formed by another chaplain to establish Christian community on base. The couples—who each hailed from different parts of the U.S.—asked if Carpenter would begin discipling them.

Carpenter accepted and told them about the Bible-journaling method he and his wife had been going through the past eight months.

“Because they’re military, they got out their military journals and asked how to use the H.E.A.R. method to study the Word,” Carpenter said. “Since then, we’ve been meeting in a living room every Wednesday night to discuss what we study and journal about throughout the week.”

Shortly after Carpenter met these couples, several single Marines approached Carpenter and asked for advice on how to read the Bible. Carpenter quickly formed a second discipleship group for these Marines. He also launched a weekly lunch group for Marines who live off base to allow them to get together and discuss their Bible-journaling experiences.

“Journaling through Scripture has impacted my own Bible reading through the years,” said Robby Gallaty, senior pastor of Long Hollow Baptist Church in Hendersonville, Tennessee, and creator of the H.E.A.R. journaling method. “I’m encouraged to learn how God is using the same H.E.A.R. journaling method to equip these Marines. I can’t wait to see how God uses them to live as missionaries wherever they serve.”

Recently, Carpenter was also asked by his pastor to teach a Bible journaling class over the summer to members of his church. Carpenter said when he first started using the H.E.A.R. method, he had no idea it was going to spark a movement of Marines and churchgoers journaling through God’s Word in the middle of the Pacific.

“I’m now taking four different groups through the H.E.A.R. method of studying Scripture,” he said. “I have people coming up to me every week saying, ‘Will you teach me how to open up the Bible?’”

In the process of forming these discipleship groups, Carpenter said he’s also come in contact with more than a half dozen Marines who are planning to enter vocational ministry after they fulfill their commitment to the military.

In addition to journaling together through the Bible, Carpenter and these Marines listen to LifeWay Leadership podcasts throughout the week and then come together to discuss what they’ve learned.

Podcast episodes they’ve discussed so far have come from “5 Leadership Questions” hosted by Todd Adkins and Daniel Im, “Making Disciples” with Robby Gallaty, and “Ask Me Anything” with J.D. Greear.

“Each week we hear stories from leaders around the globe who’ve been encouraged or equipped in some way through our LifeWay Leadership podcast network,” said Adkins, director of LifeWay Leadership. “These stories keep us striving to continue bringing practical and immediately applicable resources to churches and church leaders working to make disciples.”

As for the original Bible that served as a catalyst for this discipleship movement, Carpenter says he no longer has it. He’s gone through several Disciple’s Study Bibles since then, but his original copy is now in Africa.

“I was sitting next to a couple from the Kenyan Navy, and the wife kept looking at my Bible that had all my handwritten notes in it,” Carpenter recalls. “I’ve served in Africa and so I asked her in Swahili, ‘Do you want this?’

“She took the Bible saying, ‘I’d like to learn what you’re thinking about,’” Carpenter said. “When I meet someone who doesn’t have a Bible—which is unfortunately quite often—I always give them mine.”

Trevin Wax, director of Bibles and reference for LifeWay, says one of the most exciting aspects of his job is learning how the biblical resources his team creates helps people come to a deeper knowledge of God through His Word.

“Tools, study notes, reading plans—all of these can help people get into the Scriptures for themselves, said Wax. “I’m delighted to hear of how God is using the Disciple’s Study Bible around the world.”

Carpenter says he sees his work in the military as a fulfillment of the Great Commission.

“I’ve gone on dives with SEAL teams, shot guns with Marines, and have been on warships in downrange deployments, but I’m a missionary the same way a missionary to China is a missionary,” Carpenter said. “They’re learning Chinese; I’m just learning military language. And I’m wearing the clothes and speaking the language of my people.

“I’m in it because people need to find Jesus.” 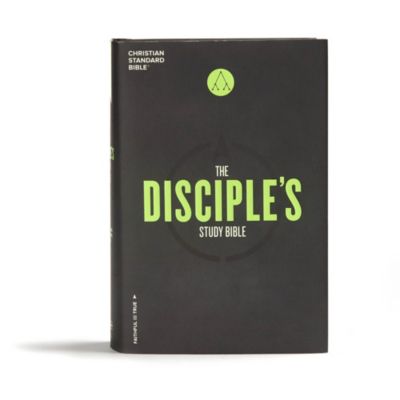 Previous Post: « 3 Reasons Your Leadership Team Should Be Multigenerational
Next Post: Pastors Are Not Quitting In Droves »