Photo by JESHOOTS.COM on Unsplash

Heading to a church gathering can be a bit overwhelming for some. Maybe you have young kids, and getting out the door is next to impossible. Or maybe you or your loved one has a medical condition that precludes you from leaving home. Or you might feel that you wouldn’t be welcomed in a church community because of your lifestyle, beliefs, or doubts.

For those seeking spiritual community in the 21st century, some are beginning to turn to a new concept of virtual reality (VR) church, where you are transported from your living room or even your bed to another world full of avatars, anime characters, and church gatherings on the interwebs.

I know that it sounds odd to many because we think of VR as a video game experience, but there are people across the world that rely on this technology to connect with others and foster community as they seek something that will fulfill their deepest longing for love, companionship, and spirituality.

Proponents of this technology, including VR Church pastor D.J. Soto, argue that this is an emerging method of reaching people with the hope of the gospel who would otherwise never step foot in a traditional church gathering down the street. They argue that it allows for missional work across physical boundaries, even recently allowing a young woman to experience “water” baptism in VR.

What is virtual reality?

As I have written previously, VR is a concept that has been around for many years but wasn’t available to the masses until recently. To enter VR, you can purchase a full-fledged headset from popular brands like Oculus, HTC, and Sony. Or you can use your smartphone placed inside of a cardboard headset like Google Cardboard.

Once you power on your headset, you can be transported to other continents or other-worldly places full of video game-like characters. In these virtual worlds, you might even walk past a gathering of people in a digital sanctuary who are learning from the Bible.

How should we think about VR churches?

With the rate that technology changes in our society, it can be overwhelming to keep up with the flood of innovation and new opportunities. Church leaders, especially, can feel a unique burden to stay aware of these changes because of their calling to minister to their communities and share the love of Jesus. When we approach VR church, we must consider a few things in mind before rushing to make a judgement.

First, it is important to understand the appeal of VR for many people in our communities. As pastor D.J. Soto has said, there are many who seek out this kind of online community because of physical limitations, fear, and feeling as though they would not be accepted in a flesh-and-blood church gathering.

VR church can have a real and lasting impact on people as they are exposed to the teachings of Scripture. They have the ability to anonymously attend these gatherings, ask questions, and do so in the relative safety of their own home.

While there are major missiological uses for this technology as a way to share the love of Christ, VR church could become the end of the journey for some rather than the model of the sacrificial body of Christ that we see in the New Testament. Once one trusts in Christ for salvation, he or she is joined to his physical body (Acts 2:42-45), the church, and is a part of her mission to share this message of hope with the entire world (Matt 28:18-20).

There can be no substitute for the local church gathering physically together to worship our risen Lord.

Second, there is a reason that we prioritize the physical nature of the church gathering and worship experience, and it isn’t because of tradition. One of the biggest issues to reappear in this digital age is an old heresy called Gnosticism, which prioritizes our spirit over the physical body. While the body has some value, gnostics believe, it pales in comparison to who we really are as spirits.

The body is simply a temporary container for our self rather than an inseparable part of who we really are.

Modern technology, like VR, can give us the impression that our bodies and the physical world are not important because our minds and spirits are truly who we are. This belief extends past VR to the rise of advanced robotic and artificial intelligence. Some think we will be able to upload our minds to digital or robotic bodies as we transcend the physical limitations of the flesh.

Christians must remember that our minds and bodies are not separate elements but integral to being a human. We must not give in to the lie that our bodies are somehow evil and disposable. Yet, we must also recognize that they are indeed broken by the fall.

We worship a God who is spirit, but who was also, in the Son, physically nailed to a tree (John 20:18), physically raised from the dead (1 Corinthians 15:20), is physically is reigning right now on the throne in heaven (Revelation 20:11), and will physically come again in the flesh to redeem his people and the world (Revelation 21:3-4).

Furthermore, Christians will live in physical, resurrected bodies for eternity (Isaiah 26:19; Acts 24:15). The body, therefore, has immense value. And we should prioritize the full experience of humanity in mind and body because we worship a resurrected King who took on flesh to rescue us.

While VR church might have a great impact in reaching people in the 21st century, we must not lose sight of the fact that we are called by God to be His body in this world. We weren’t saved to live in isolation or digital communion with one another. We were bought with a price to live in community with one another and to live as a people transformed by the body that was broken for us and the blood that Christ shed.

As these tools are continually developed and used by those around us, we must do the hard work of connecting with the communities that God has placed each of us in. We must not forget about those who are physically unable to join a traditional church gathering due to illness or medical issues.

This is one of the great callings that deacons have in our digital age. Deacons are set apart by the church to care for the physical needs of our people (Acts 6). While the elders and pastors of our church are primarily called to serve the people in Word and prayer, deacons have a calling to step into difficult situations and serve people in the name of Christ.

May the rise of VR spur each of us on to love and serve our communities, not only in Word but also in deed. As we use the tools that God has given us to share the love of Christ across the world, let’s prioritize establishing physical churches.

Let’s move forward together in the mission that God has entrusted each of his people with to make disciples of all nations and to point people the physical community that God established by the physical body of his Son (1 Corinthians 12:27)—a community that doesn’t fear the unknown or stepping into the communities we have been placed among.

JASON THACKER (@jasonthacker) is an associate research fellow and creative director for the Ethics and Religious Liberty Commission. He is the author of an upcoming book on artificial intelligence and human dignity with Zondervan. This article first appeared on ERLC.com and is used with permission. 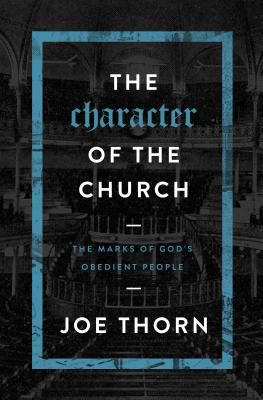 The Character of the Church

Joe Thorn examines, “What makes a church a church?”

Previous Post: « 3 Reasons Why Pastors Should Study Church History
Next Post: The 7 Most Dangerous Words in Evangelism »