Growing up in the Bible Belt, I heard many gospel presentations during my childhood. So much so, that by the time I was eight, I knew the following phrases by heart:

Now, of course, one of these things is not like the others. While the first three sayings come from Scripture, the latter is a man-made cliché that often pops up in gospel presentations.

Nevertheless, that phrase was recited to me so often as a child, I gathered it made up the text of John 3:17. I assumed the gospel that begins with, “For God so loved the world…” concluded with, “Now, all you have to do is…”

I’m eternally grateful for every person who shared the gospel with me growing up and believe the people who used this seven-word call-to-action with me did so with good intentions. But while the phrase, “Now, all you have to do is…” aims to highlight the vital truth that redemption is complete in Christ, I believe it actually serves as an unhelpful—and, at times, even dangerous—Christian catchphrase.

Here are three reasons to consider dropping the well-worn cliché from gospel presentations.

1. It Sets the Stage for Minimal Discipleship.

The phrase, “all you have to do is…” often transitions the redemptive narrative—a story grounded in history—to the present day imperative to repent and believe. Such a transition is needed as it answers the question the gospel originally evoked among the crowd at Pentecost: “Brothers, what shall we do?” (Acts 2:37).

The “all you have to do” response, however, is dangerous in that it establishes a nominal understanding of what discipleship entails—an approach that runs in stark contrast to how Jesus presented His gospel.

Instead of laying out a minimal threshold for discipleship, Christ always raised people’s expectations of what it means to be His follower. Rather than telling potential disciples, “Here’s all you have to do,” He presented difficult sayings such as:

There are even parts of Scripture where it seems Jesus is trying to discourage people from following Him (Matthew 8:18-22, Luke 9:57-62). But Jesus wasn’t being discouraging; He was instead asking people to deeply consider what it means to be His follower and commanding them to count the cost of discipleship (Luke 14:25-33).

Given these biblical warnings and commands, is it really helpful to tell people, “Here’s all you have to do for Jesus?” Shouldn’t evangelists rather say:

“There are weighty reasons to not become a Christian. Your life will be far easier in this world if you keep to the course you’re already on. But if you want to know truth, live for the purpose you were created for, and gain eternal life, Christ’s gospel is offered as a free gift.”

The kind of discipleship that perseveres over time flows from a commitment to truth, not an easy life filled with minimal expectations and demands.

2. It Creates Confusion About Salvation.

In a 2013 interview, J.D. Greear, pastor of The Summit Church in Raleigh, Durham, N.C., and current president of the Southern Baptist Convention, spoke to “assurance issues” in evangelical churches and why clarity is important when sharing the gospel.

Greear alluded to the number of people who, “pray a sinner’s prayer and think they’re going to heaven because of it, even though there’s not a detectable difference in their lifestyles from those outside the church.”

Such confusion about conversion is fueled by phrases like “all you have to do…” As a result, people living in long-term, unrepentant sin, may claim to be saved because, “I was told all I had to do was pray a prayer and I prayed it.”

While salvation is a free gift, true faith is marked by a new life that bears fruit for God’s Kingdom (James 2:18). Lowering expectations of discipleship by saying, “here’s all you have to do” often creates false assumptions for people to think they expressed saving faith merely because they signed a card or walked an aisle.

It’s true that God wants His people to have a firm assurance of eternal life (1 John 5:13). This assurance, however, comes from the sufficiency of Christ and one’s posture toward the gospel—not a one-time event marketed as a low-cost ticket into the Kingdom of God.

“With just five easy payments of…”

“All you have to do is pick up the phone…”

Statements like these are trademark pitches infomercials use in an attempt to close their must-have deals by appealing to a sense of urgency and ease. Unfortunately, similar language of the “now, all you have to do…” variety can also creep into gospel presentations so that, in an attempt to communicate free grace, Christians actually broadcast cheap grace.

Dietrich Bonhoeffer highlighted this danger in his book, The Cost of Discipleship:

“Cheap grace is the preaching of forgiveness without requiring repentance, baptism without church discipline…Cheap grace is grace without discipleship…

“Costly grace is the treasure hidden in the field; for the sake of it a man will go and sell all that he has. It is the pearl of great price to buy which the merchant will sell all his goods. It is the kingly rule of Christ, for whose sake a man will pluck out the eye which causes him to stumble; it is the call of Jesus Christ at which the disciple leaves his nets and follows him.”

Unlike Bonhoeffer’s imagery, the compelling nature of infomercials is specifically tailored to keep people from counting an offer’s cost. Christians should never feel the need to pad the gospel message entrusted to them by borrowing gimmicky language from TV.

But Really, Here Are the Most Dangerous Words.

Let me clarify that the most dangerous words in evangelism are actually ones that are never said—it’s better to stumble through the gospel than to never share it in the first place.

This doesn’t mean, however, that Christians shouldn’t develop the ability to proclaim the good news with theological precision. The Church should readily preach salvation by faith alone while also clearly communicating the biblical response to Jesus’ gospel—belief and repentance.

But let’s refrain from saying, “Now, all you have to do is believe and repent.” If Christ is to be taken seriously, we should prepare straight-and-narrow travelers for hardships along the way.

In this manner, those who count the cost of discipleship will be prepared to not turn back when the going gets tough. 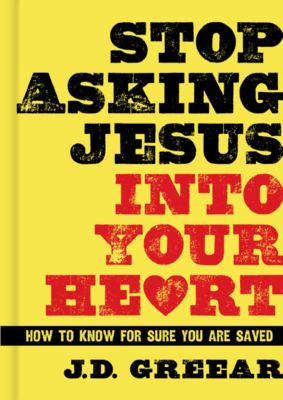 Stop Asking Jesus Into Your Heart: How to Know for Sure You Are Saved

Previous Post: « What You Need to Know About the Virtual Reality Church
Next Post: Mandrell elected as LifeWay’s 10th president and CEO »