“To be in ministry is to be a Christian that is on mission wherever you are, preaching and living out the gospel with unbelievers,” says author, speaker, and artist Jackie Hill Perry. “While doing this, there is and will be the temptation one day to give up.”

Perry outlines four vital truths to remember from 2 Corinthians 4 about ministry when we lose heart.

Referencing 2 Corinthians 4:1 Perry says ministry given to us has come by the mercy of God, so therefore we shouldn’t lose heart.

She says that like Paul, the author of this text, believers are ambassadors of Christ, making the appeal to others to turn to Him: “God is using us in our ministries to beg the world to be reconciled to God.”

Ministry is a mercy because it’s reflecting the mercy we’ve been shown.

“Not only have you received mercy to be in a relationship with God, but it is because of that mercy that you have now been given the privilege to speak on behalf of God,” says Perry, author of Gay Girl, Good God.

We really are not even supposed to be alive, but it was God who was rich in mercy, who made us alive in Christ, Perry paraphrases from Ephesians 2:4-5.

“He saved us and He placed us on a mission.”

Perry listed Moses, John the Baptist, Elijah, Jonah, and Jesus Christ all as ones who brought the merciful message of the Lord to this earth. And now the church, the body of believers today, has the same privilege to testify of the Lord.

When we forget that ministry is a mercy, we can slip into seeing it as a burden, Perry says. And it is the kindness of God to allow us to partner with Him as He saves the world. His mercy is the motivator for spreading the gospel.

“It moves us to do whatever God requires us to do,” says Perry. “To be able to love on people is a privilege that God has given us because He has been merciful to us.”

2. Ministry is not about us.

Paraphrasing 2 Corinthians 2:5, Perry says if ministry was about us, then the very people to whom we minister to would have no hope and we’d have no joy in ministering to them.

“People are blind, the gospel is foolish to them, Jesus doesn’t make any sense, He doesn’t seem attractive, but it is God who helps people see.”

But making ministry about ourselves is a slippery slope, says Perry. It can be as simple as giving advice that comes from our own wisdom rather than straight from God’s word.

“It can be dangerous when we train people to come to us for what they should be and do and believe and we’re not pushing them every chance we get to God and His word,” she says. “Make it clear that you opinion is not authoritative, but God’s word is.”

The root of this attitude can often be pride, says Perry. Beginning to think that people cannot succeed as Christians without our help can cause us to try to manage their spiritual walk in an overbearing way that goes beyond accountability.

“You have mistakenly believed that they need you to be kept by God, not God Himself,” she says.

While community and discipleship are extremely important, Perry quotes Jude 1:24 in saying that it is God who ultimately keeps us from stumbling and keeps us walking in the light.

“That should free you from functioning in ministry as if the salvation of some and the perseverance of others ultimately depends on you, because it doesn’t,” she says. “You don’t have to be more than who you are to be useful to God. All you have to be is a person committed to loving Jesus and loving people.”

When ministry is anchored in anything but God, pride will steal our joy, she explains. The focus should really be all about God getting the glory because while we cannot save one soul, God saves millions.

“It is through our proclamation of God that makes room for God to get all the glory He deserves,” says Perry. “Ministry is not about us and that’s a good thing.”

Diving into the illustration of humans as pottery, Perry quotes 2 Corinthians 4:7-8 saying, “But we have this treasure in jars of clay, to show that the surpassing power belongs to God and not to us. We are afflicted in every way, but not crushed, perplexed, but not driven to despair.”

Perry says we are fragile, cracking under pressure. This essence of humanity was seen in Paul’s life, which is why, said Perry, the difficult situations affected him to such an intense degree. The things he felt–struck down, persecuted, afflicted–are things we all feel at some point.

We think “this jar of clay can only take so much before it’s crushed,” says Perry.

But even that is ministry, she explains: “You are ministering to the people around you with your life, even when your life is hard. Never think that your ministry is more impactful when your life is better. What has kept us going is seeing how God kept them [other afflicted Christians in history] through it.”

Paul had an answer for every hardship he encountered because he knew he wasn’t abandoned by God. He may have been struck down, but his body could not be destroyed because of the surpassing power of God in Him.

“When you don’t lose heart people have to know there’s something going on here,” says Perry. “What people will see is not you, but that God is the strong one. One day, by looking at your life, they might say to themselves, if God can keep them through that, then I guess He can keep me through this.”

Referencing 2 Corinthians 2:15, Perry points out that Paul was willing to be attacked and slandered because he was not in ministry to be comfortable or esteemed. Rather, He endured it all because ultimately He wanted God to be glorified.

As should we, she says, looking beyond the difficulty toward the good fruit that could come of it all.

Perry shares a story of a time when she spoke at Harvard University and faced persecution from students in the form of insults and profane gestures.

“I knew that I might get slandered, but I refused to see the people in the room as they were there. I decided to see them as who I knew God could make them,” she recalls.

Instead, Perry says he recognized “they might be people who one day would lift their hands and say ‘thank you Jesus for being merciful.’”

When the temptation comes to give up, it is vital to remember that ministry will ultimately lead to thanksgiving to God.

“God wants His glory, and if that means that you have to suffer a little bit for people to see God in your life, then you do it,” says Perry.

This article is based on Jackie Hill Perry’s address at the 2018 LifeWay Women’s Leadership Forum. 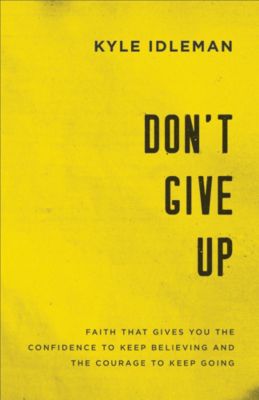 Don’t Give Up: Faith That Gives You the Confidence to Keep Believing and the Courage to Keep Going