Moviegoers gather and pray outside a theater in Edina, Minn., after seeing “Kingdom Men Rising” during its two-night Fathom Event release. | Photo courtesy of The Urban Alternative

After a successful theatrical event, Kingdom Men Rising, a documentary about biblical manhood, will now be made available for churches and other groups to show beginning June 1. Believing “the biblical definition of manhood is under attack,” pastor and author Tony Evans wanted to do something about it.

As an extension of his books, Kingdom Man and No More Excuses, Evans said presenting the message through a film “was an important event because it used a modern medium to change lives. The large-scale visuals on the screen were used to challenge men to be who they were created to be.”

Audiences resonated with the message. More than 100,000 people attended nationwide showings in 732 theaters on April 29-30.

“The response has been positive and overwhelming,” said Evans. “Many people are telling us that the message of the film is very timely and needed in today’s world.”

Bill Craig, an executive producer of the film and director of publishing at LifeWay Christian Resources said, “It was the right time to have a nationwide Christian event for men and men’s groups—to respond to the cultural confusion about manhood and rally Christian men to join other men in challenging one another to be ‘Kingdom Men.’”

At one film screening in Houston, attendees began to spontaneously gather, hold hands and pray. “There must have been 75 people in a huge circle. We began to pray the Lord’s Prayer out loud,” said Rickie Bradshaw, director of prayer for KSBJ, a local Christian radio station.

“Many were in tears as they held hands to pray,” Bradshaw said. “The scene was a great picture of the body of Christ from many walks of life and ethnicities gathering in one accord to express their desire to respond to the Kingdom Men Challenge from the film.”

Heather Hair, an executive producer of the film and director of ministry development at Tony Evans’ The Urban Alternative, said she will never forget groups of moviegoers gathered outside the theater talking for an hour after the film.

“It looked like church had just let out,” she said. “Men, women and young adults spoke with enthusiasm about the empowering call to discipleship this film stirred in them.”

Evans believes that reaction and others like it are due to just how timely and needed the film’s message is.

Justin Diel, a producer of Kingdom Men Rising and manager of LifeWay Films, said hundreds of positive responses have flowed in through email and social media. “Many of them are asking how they can see the film again or show it to someone else.”

Because of this response, LifeWay Films will be offering digital streaming of Kingdom Men Rising beginning June 1.

“Showing this film to your church or group will bring them together as a community where they can learn and help each other move together in a common direction,” Evans said.

Streaming passes are available for pre-purchase now and provide access to watch the film on-demand from June 1 through July 15, 2019.

The pass includes a public performance site license to show the film to a group of any size at one location for a limited time. It also grants customers technical support for LifeWay’s Digital Pass streaming platform.

For more information or to purchase a streaming pass for your church or group visit KingdomMenRisingMovie.com or go to LifeWay.com. 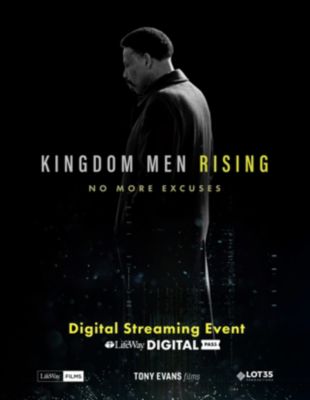 Previous Post: « 4 Difficult People You’ll Encounter in Ministry—and How to Handle Them
Next Post: 3 Things I Asked God To Do To Get Me Out Of A Comfortable Rut »