Famed Christian author C.S. Lewis is back in the news with the recent announcement that Netflix will be adapting his well-loved series, The Chronicles of Narnia, for the streaming platform.

But is Lewis “relatable” to people today? Do you reach for one of his pithy—and often amusing—quotes to wake up your listeners? Or do you secretly wonder if C.S. Lewis, as a person, really had life experiences we can learn from today?

Confession: I find Lewis’ life as a man even more fascinating than his writings. Research for my latest book, Women and C.S. Lewis: What His Life and Literature Reveal for Today’s Culture, brought to light circumstances he experienced, which I mistakenly thought were problems confined to our 21st century. Five examples:

C.S. Lewis faced workplace discrimination due to his faith.

Hard to believe but true: C.S. Lewis suffered from what today we call “workplace discrimination.”

Although Lewis was becoming world-famous for his books explaining the Christian faith, Oxford University management was slightly embarrassed, so they passed him over time and again for promotions.

Eventually (and with some anonymous nudging by his best friend, J.R.R. Tolkien), Oxford’s rival, Cambridge University realized what a valuable asset Lewis would be to its literature department. Cambridge created a chairmanship for Lewis in his area of expertise: Renaissance and Medieval Literature. So it was Oxford’s loss, but Cambridge’s gain.

C.S. Lewis had to consider political entanglements with his faith.

Lewis and Winston Churchill were featured on BBC broadcasts during WWII. Citizens needed encouragement from Lewis, who advised his fellow Britons to turn to the Lord, and from the prime minister, who spoke on patriotism and coming to terms with their frightful predicament.

Churchill reached out to Lewis with the offer of a coveted OBE or Order of the British Empire. Were Lewis to have accepted, he would have been recognized by his nation with the highest honor next to knighthood.

But Lewis declined Churchill’s offer. While he said the honor would be “highly agreeable” to him personally, he expressed concern receiving a political honor from Churchill might taint his credibility with readers and listeners who disagreed with the Prime Minister’s politics and undermine his ability to effectively communicate Christianity to everyone.

Lewis and Tolkien formed a literary group, The Inklings, with two criteria for joining: having faith in Christ and being active writers.

This group of all men is a problem, according to several influential critics, such as Harry Potter author J.K. Rowling. I researched this accusation by Rowling and others while writing Women and C.S. Lewis.

I learned that Lewis was actually ahead of his time in his treatment of women – both in his personal life and in his writings. Contributors to Women and C.S. Lewis explore his close friendships with Dorothy L. Sayers, Sister Penelope, and Ruth Pitter, all fellow writers who Lewis said encouraged them (and vice versa). His visits and correspondence with such acclaimed women demonstrate his deep respect for them.

One fact in his favor you probably already considered: Lewis’s Narnia character, Lucy, is the one who first realizes the true identity of Aslan, not one of her male siblings. In another fiction book, Til We Have Faces, Lewis writes in first person – using a woman’s voice – something many male authors of his day considered beneath them.

C.S. Lewis had loved ones who scorned his faith.

It certainly was not his wife, Joy Davidman Gresham, whose brilliant mind he described as “muscular” —high praise from Lewis. With her impressive educational and literary background, Joy is a major point for demonstrating that Lewis was no sexist, certainly not a misogynist.

However, before he married Joy, he shared a home with Mrs. Janie Moore, whom he described in a letter to his friend, Sister Penelope, as the woman “I call my mother and live with (she is really the mother of a friend) – an unbeliever, ill, old, frightened…”

Mrs. Moore was a bit of a shrew. Women and C.S. Lewis fleshes this out more, but she ridiculed Christianity, calling what today we mean by The Lord’s Supper “a blood feast,” plus other insults, despite her knowledge of Lewis’ fame as a successful lecturer and author on understanding the walk of faith.

In spite of this, Lewis treated her respectfully, later even visiting her daily in a nursing home when she was so deep into dementia that it is doubtful she even knew he was her faithful visitor.

C.S. Lewis spent much of his early life as an atheist.

People unaware of his story seem surprised that Lewis considered himself an atheist from age nine until his early thirties. It’s an inspiring and all-too-human story that often blows the minds of people who assume the often-quoted Christian author was rock-solid in his faith throughout his life.

I love the look on people’s faces when they learn this amazing truth about a man who lived in the era when almost everyone considered themselves to be a “Christian.” Yes, C.S. Lewis walked away from the faith he was taught as a child, but he returned.

This should give encouragement to anyone with family or friends who have walked away from the church and to Christians trying to share the gospel with hardened atheists today. You never know—they could be the next C.S. Lewis.

CAROLYN CURTIS, author and award-winning journalist, has written for numerous publications, including Facts & Trends. Her most recent story on the first anniversary of the Sutherland Springs, Texas, church shooting won an award from the Evangelical Press Association. Read more from her at CarolynCurtis.net. 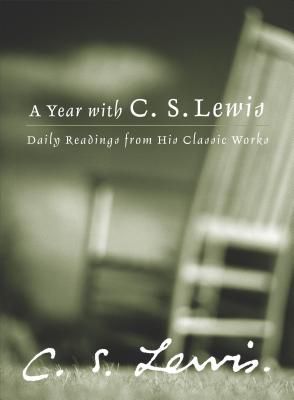 A Year with C.S. Lewis: Daily Readings from His Classic Works

Previous Post: « Discipling a New Christian? 3 Reasons to Start With This Book of the Bible
Next Post: 3 Ways Pastors Serve As Craftsmen »