In the long history of attention giving and attention getting, the church once enjoyed a corner on the market. But that dominance is over, says law professor and technology expert Tim Wu in his book The Attention Merchants: The Epic Scramble to Get Inside Our Heads.

“To be sure, it isn’t as if before the twentieth century everyone was walking around thinking of God all the time,” he writes. “Nevertheless, the Church was the one institution whose mission depended on galvanizing attention; and through its daily and weekly offices, as well as its sometimes central role in education, that is exactly what it managed to do.

“At the dawn of the attention industries, then, religion was still, in a very real sense, the incumbent operation, the only large-scale human endeavor designed to capture attention and use it. But over the twentieth century, organized religion, which had weathered the doubts raised by the Enlightenment, would prove vulnerable to other claims on and uses for attention.”

Historically, religion was the powerhouse shaping a whole culture’s collective imagination, but the spectacle makers have usurped this role today. Our media reaches out to captivate our imaginations—not with a new god but with a new shampoo.

Consumer products are presented in pixels before our eyes for us to try on. This new ability to monetize the human gaze ushered in the attention economy run by attention merchants.

Wu’s point is important, if slightly exaggerated, for the simple reason that Jesus clearly warned His followers in the first century to guard themselves from the consuming desire for wealth. Love of money was (and remains) a corrosive idolatry, forcing human attention away from the message of the gospel (Matthew. 13:22; Mark 4:19).

Because human attention has always been lured from the weight of eternal things and hooked by the shiny bait of expiring things, the church has never enjoyed exclusivity in the market of human attention. But Wu’s observation is important to see, especially as he traces the history of attention-merchant tycoons who monetized the printing press, television, Internet, and eventually the smartphone.

The rise of media saturation, targeting every moment of our lives, has ushered in a new age of competition with the gospel for the human gaze.

This culture-wide attention grab is a challenge to the church in two obvious ways. First, in our attempts to reach the lost we compete with the fragmented spectacles that drain life of its sober attention and focus.

Second, we lose the ability to disconnect from culture in order to flourish in communion with God. Prayer requires our divine-centered attention. In prayer, we take a moment (or longer) to consciously pray to the Father, in the name of the Son, through the Holy Spirit—not just in our morning entreaties or mealtime thanksgivings but in brief petitions sprinkling divine life in our days.

Paul calls us to the discipline of prayer. We must not only pray without ceasing; we must pray without ceasing in a spirit of undaunted alertness—that is, with full attention (Ephesians 6:18; 1 Thessalonians 5:17). Perhaps the best example of what it means to live a productive, ceaselessly prayerful life comes from nineteenth-century preacher Charles Spurgeon, who told a friend: “I always feel it well just to put a few words of prayer between everything I do.”

To pray without ceasing is not a neglect of daily duties. It is not multitasking, with our attention split between God and work. Praying without ceasing claims the momentary transitions in our day, the rare empty moments of silence, and turns our attention on God himself, moments now plundered and carried off by digital media.

Prayerlessness may be the fault of my media. It is certainly the fault of my heart. In the little cracks of time in my day, with my limited attention, I am more apt to check or feed social media than I am to pray. Because of my negligence, God grows increasingly distant from my life.

Yes, there are apps and alerts to remind us to pray. May we use them. But in the digital age, nine-second intervals of attention calculate into four hundred discrete spectacle modules per Snapchat hour, a spiritual chaos meant not to serve the soul but to serve the attention merchants.

Our attention is finite, but our call to persistent prayer is clear.

TONY REINKE (@TonyReinke) is the author of numerous books, including Competing Spectacles, from which this post was taken, ©2019. Used by permission of Crossway, a publishing ministry of Good News Publishers, www.crossway.org. 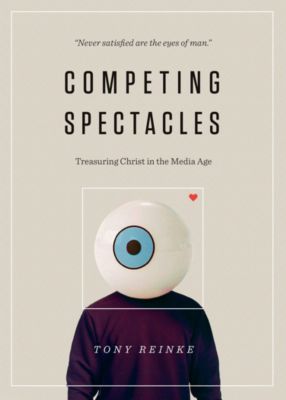 Previous Post: « Why Active Relational Presence Matters in Ministry
Next Post: 3 Suggestions to Care for All Women in Your Church on Mother’s Day »