From the time he was saved in 1945 at a Youth for Christ event where Billy Graham was preaching, Warren Wiersbe was a man of the Word. His preaching and writing are deep enough to make a Ph.D. professor think and practical enough to help a Sunday School teacher struggling with a passage of Scripture.

On Friday morning, May 2, I woke up to the news that my dear friend Warren had stepped into glory. I wasn’t ready. For several weeks, we had been working on plans to surprise him and his wife Betty with a quick visit. The last time I saw him was the fall of 2018. I traveled to Lincoln to spend time sitting at his feet, listening and learning. We took pictures, looked through his sermon notebooks, laughed, and reflected on life and ministry. Warren has had an impact on my ministry since the 1970s when his books and cassettes of his sermons began filling many shelves in my office. I have signed copies of every book he’s ever written—even his first books, Magic with Cards and Tricks with Thimbles (but that’s a whole other story).

The first time I heard Warren preach in person was in the ’90s during a five-day Bible conference at the Billy Graham Training Center at the Cove. Warren and I connected over our love for my first mentor, Vance Havner. We would swap Havner stories and try to imitate his voice.

My wife and I always looked forward to spending time with the Wiersbes. One of my favorite things to do with him was to visit used-book stores—the man could work a bookstore and find treasures! We heard Warren at the Cove for 13 consecutive years. Listening to him open the Scriptures was like sitting by a cool stream on a hot summer day. It was always refreshing for my soul and ministry.

Our friendship resulted in regular phone calls that required me to have a legal pad close by. I never failed to get a sermon idea, a series idea, a great joke, or insights into what he was writing at the time. When I wasn’t sure about a Bible passage, I often checked with Warren.

He always ended our calls by asking me, “What are you preaching Sunday?” Warren always wanted to talk about the Scriptures. I asked him once why he didn’t use his incredible humor and wit in his writings. He replied, “I don’t want to waste the space. I’ve got too much to teach.”

As Warren continued pouring into my life and ministry, we were privileged to host him for two Bible conferences at Sherwood Baptist Church. We also hosted two pastors’ conferences together that he called “Bridge Builders.” It was the passion of his life to connect people and ministries for the sake of the kingdom.

Warren introduced me to great preachers and recommended great books to read. More than once, I would receive a box of books from his library. He sent me classic books by George Morrison, Alexander Maclaren, and many others. He’s the reason I had the honor of dining with Cliff Barrows one evening. Warren was indeed a bridge builder.

Many aren’t aware that he was the anonymous author of the popular Eutychus column in Christianity Today. Warren could preach across denominational lines. He could make a text come alive. He could make a familiar passage rich with meaning.

And for a number of years, he and I partnered together on 2ProphetU, a website and Facebook page designed to bless pastors and encourage them to stay in the battle. He was a pastors’ pastor; I was just happy to be along for the ride.

Despite his far-reaching ministry impact, Warren remained humble. Over the years, I’d ask Warren where his old sermon tapes were. They were in the garage! I’d get the typical response, “Nobody is interested in those.” I would kindly disagree and tell him they needed to be preserved.

One day, six huge boxes arrived at my office. Inside were hundreds of cassettes and reel-to-reel tapes of Warren’s sermons. After restoring them, we made CD sets for his children and started the Warren Wiersbe podcast. Today, free of charge (by Warren’s request), people around the world can hear his messages.

Warren’s last Bible conference was at the church he pastored in Kentucky. Two friends and I drove there to surprise him. When he walked in, we were on the front row. He kept looking at us and saying, “What are you guys doing here?”

He was famous, but never considered himself a celebrity. He didn’t hide in a green room, because He loved to be around people. It seemed he found a way to talk to everyone at any event.

Warren loved preachers. Since his homegoing, I’ve heard from dozens who were significantly influenced by him—one of them had ever met him personally. One said, “His influence is phenomenal.” Another texted me, “Probably each month or two, I quoted him and pretty well read him weekly.”

One said, “What a GREAT loss to all of us.” Another noted, “I quoted him last Sunday, and as I studied this week, I thought about how much he has shaped my life and ministry through books.” A church planter texted, “He blessed my message prep immensely.”

As I’ve surveyed social media in light of his death, the outpouring of gratitude from people in every walk of life reflects that a man of God passed our way. We are all better people because Warren Wiersbe walked this planet.

In a day where many mere shrubs and bushes strut about and smack of their greatness, Warren was a true gentle giant, a mighty oak with a firm footing who cast an immeasurable shadow.

Although he never used social media, he was trending on Twitter Friday. I’m sure he’s laughing over that in heaven. There’s been a great reunion in glory. He’s seen his friends who have gone before him. As he said to me, “I’ve got more friends in glory than I have left on earth.” Yet he had more on earth than he realized.

Most importantly, He has seen face-to-face the Author of the book he loved more than any other. Well done, my friend. Thank you for all you’ve done for the kingdom.

MICHAEL CATT (@MichaelCatt) is pastor of Sherwood Baptist Church, executive producer of Fireproof, and author of numerous books, including The Power of Purpose. 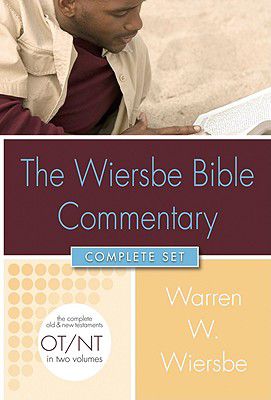