Inspired by the sight of a nearby hamster wheel, a young woman grabs her Nikes and invites everyone she knows to run the same direction to get the world spinning again.

Well, they get the world spinning again. The problem is, they’ve been running in the wrong direction. So, they all turn around and run the other way. Of course, Kevin Hart, apparently not just the comedic genius but the geophysics genius as well, knew they were going the wrong way the whole time.

I love this commercial.

But I also hate this commercial.

Hats off to Nike, because the commercial did make me head down to the mall for a new pair of running shoes.

But the truth is, whether all 7.4 billion of us are running the same direction or standing on our heads doesn’t affect the rotation of the earth in the slightest. You’d think that at least Bill Nye the Pseudo-Science Guy would have known better.

I have this same frustration with people who try to change the world through Facebook and Twitter posts. Nowhere is more energy spent with less actual output than in the machinations of social media.

I’m sure you know what I’m talking about. Those folks on Facebook who try to convince everyone that “TO NOT AGREE WITH ME ON __________ ISSUE MAKES YOU A BAD PERSON WHO HATES FREEDOM AND—OH BY THE WAY—YOU ALSO PROBABLY KICK PUPPIES AND THROW PLASTIC STRAWS IN THE INTERCOASTAL WATERWAYS!!!!”

But are our digital rants actually changing people? Or are they more about us trying to declare our righteousness?

The longer social media exists, the more it seems to become this generation’s version of shoeless, bearded men parading through downtown with sandwich boards shouting that the end of the world is at hand.

I worry that the sermons many of us hear in our churches aren’t faring much better. Preaching that focuses more on changing our behavior or our opinions than changing our hearts is the same as a gloom-and-doom sandwich board.

Until we experience changed hearts, all externally imposed behavioral modifications will always come up short. We’d have more luck trying to spin the earth with our running buddy Kevin Hart.

To prove this, I need to turn only to raw tomatoes and mayonnaise.

If you like tomato and mayonnaise sandwiches, stop reading and go see a doctor. Or better yet, maybe an exorcist.

Here’s the thing. If you are physically large enough, you might be able to force me to eat a tomato and mayonnaise sandwich. But that’s all you’re going to be able to do with that method.

Forcing me to eat one will never make me love one. The moment you look away, I’ll toss what remains.

In the same way, any external changes that don’t begin with a change of heart will ultimately fade away. The end result will always be left wanting.

Sadly, a lot of a church ministry strategy uses the tomato sandwich method. These strategies get people into programs, but the programs don’t bring lasting heart change.

The people only act like they love whatever the program includes, when in reality all they like is getting together with the people they already know and are comfortable around.

And worst of all, a powerless church.

Pastors who are great speakers, who can bring an audience to their feet, eliciting rounds of applause and shouts of “Amen!” often fail to create the life change we see in the book of Acts.

Those stories include simple people—normal, everyday folks who had been changed by the gospel’s power. They were even described as not very good public speakers. Seriously, in 2 Corinthians Paul notes that his preaching had the reputation of being a big nothing-burger! (2 Cor 10:10)

The problem for us today is that many of our contemporary preachers are big on oratory and small on gospel. Oratory can produce emotional responses but not lasting change. As soon as the magic of the oratory is gone, so is the movement.

When the service ends, we throw away the tomato sandwich.

This is what happens when what we hear in church centers on life-tips and practical wisdom. These sermons present a picture of how people ought to live, but that’s the end of the road. There’s no mention of the power to actually get them there.

Even worse, the content of these messages (and popular books) pulls one over on the hearers/readers, mistaking their slightly improved moralistic life with the resurrected life of new creation that is characteristic of a true child of God. Efforts like these often have the look of godliness but lack the power thereof (2 Timothy 3:5).

The end result is that they only leave people confused, exhausted, and lost.

One glimpse of the glory of God, however, in the face of Jesus Christ, or one little word of faith in the finished work of Christ, can release more power into the soul of the believer than all the sermons and all the programs ever concocted in Christendom.

God, you see, is not just after obedience. He’s after a whole new kind of obedience. God is after an obedience that grows in the soil of desire. He wants His people to be obedient because we crave righteousness, because we desire God above all else.

That kind of obedience can only be produced by the gospel.

J.D. GREEAR (@jdgreear) is pastor of The Summit Church in Durham, North Carolina, and currently serves as the president of the Southern Baptist Convention.

Excerpted from Above All: The Gospel Is the Source of the Church’s Renewal, Copyright © 2019 by J.D. Greear. Published by B&H Publishing Group. 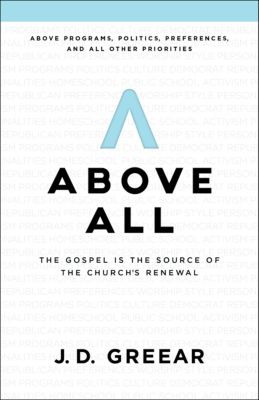 Previous Post: « How Churches Can Be Known as ‘Spiritual First Responders’
Next Post: 6 Important Truths About Blended Families and the Church »