The privilege of knowing Leonard Ravenhill as a teenager was nothing less than a sovereign surprise. Ravenhill was a British evangelist and writer who passed away in 1994. His quotes on prayer and revival still frequently pop up in sermons and on social media. God crossed our paths during the most impressionable years of my life.

Here are six lessons I learned from this wonderful man of God.

I was merely 16 years old in 1981 when I met Leonard, who was 74. The occasion was a prayer meeting he led on Friday nights in the house just outside of my hometown of Tyler, Texas.

Ravenhill knew as much about me as I did about him–nada. Yet because of this gritty English evangelist, a bunch of shaggy teenagers were praying while our peers were partying.

“My main ambition in life is to be on the devil’s most wanted list.” – Leonard Ravenhill

I’d only recently accepted God’s call into the ministry when I started attending this prayer meeting with a few friends. Private and public prayer were still awkward for me at that time. God used Leonard’s prayers to loosen me and enlighten me.

He prayed with so much intensity that I expected the carpet under his knees to catch on fire. Ravenhill’s fire for public prayer was stoked by the many hours of private prayer he’d invested between those meetings.

“The Cinderella of the Church today is the prayer meeting.” – Leonard Ravenhill

I was a Southern Baptist kid who at first was intimidated by these often raucous prayer meetings, but I eventually got used to people praying out loud and at the same time.

One night the prayer time devolved into noisy chaos and Ravenhill put a hard stop to it. It took several attempts for Ravenhill to get everyone’s attention before he said firmly, “God does not cause the spirit of confusion. We have come to pray together in unity!”

I remember wanting to give him a high-five but had just enough restraint to stand down.

“To be much for God, we must be much with God.” – Leonard Ravenhill

I really enjoyed hearing Leonard pray and teach, but he was less than awesome at singing. Keith Green sometimes led worship from his piano, but mostly it was Ravenhill who led us a cappella–at least when I was present.

Ravenhill’s favorite song was “Holy, Holy, Holy,” which he led at every single meeting. I loved it more each time we sang it.

“Entertainment is the devil’s substitute for joy.” – Leonard Ravenhill

Most of Ravenhill’s books and sermons are prophetic in tone, as are the quotes of his you usually see on social media. I suspect he was not so much angry with the culture as he was the Church.

He was a Wesleyan with holiness roots, who never stopped praying for the Church to experience the next Great Awakening.

There is righteous anger that leads to more righteousness, as well as unrighteous anger which can lead to sin (Ephesians 4:26). Ravenhill was both good and angry, which ultimately meant that he cared about the things God cared about.

“One can have instant purity, but not instant maturity.” – Leonard Ravenhill

6. Prayer is More Caught Than Taught.

My Fridays with Ravenhill ended when I went off to college five hours away. Our last visit was in the Tyler hospital after a stroke which left him temporarily speechless.

After we prayed together one last time, his nod and smile were a sufficient graduation diploma from what I consider to be my school of prayer.

“No man is greater than his prayer life.” – Leonard Ravenhill 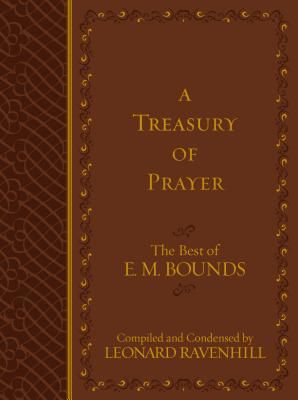 A Treasury of Prayer
The Best of E.M. Bounds

Previous Post: « 7 Reasons the Apostles’ Creed is Needed in the Church
Next Post: 4 Ways Churches Can Serve Adults with Special Needs »