The first time, I was probably about 9-years-old. I was scared to death, but everything went just fine. I did so well, no one ever asked me to sing by myself again!

Until I was in my thirties…

It was my first funeral as a senior pastor. I didn’t know the family, and they weren’t involved in church in any way. They had a friend who they wanted to lead music for the funeral service. She was a young girl who wasn’t too eager about the job but was willing to help the family because she loved them.

Apparently, her love for the family had its limits because right before the funeral started, she came to me and said she didn’t want to sing. She just wanted to play the piano.

I didn’t see a problem with this. Not having a solo isn’t the end of the world. But then she asked me if I could lead the congregational hymn she was supposed to lead.

This is probably a good time for me to inform you I have no musical abilities. I believe “monotone” is probably too generous a word to describe me.

“Don’t worry,” she assured me. “All you have to do is sing the first few words, and then the crowd will take over.”

But there was a problem. The crowd in this particular scenario was some crowd. There were only about 20 of them and they all looked like they’d rather be at a Bob Seger concert.

I grew up in church but wasn’t familiar with the song we were singing so I knew these guys weren’t going to know it. But none of that mattered.

The girl playing the piano gave me a look that said, “Alright hot shot, let it rip.”

No one else joined in as the girl had promised. Just yours truly. And it was awful. By now, the family of the deceased really wished I was Bob Seger.

My crackling voice was coming out loud and clear through the church’s sound system. In an attempt to soften the impact, I stepped away from the microphone.

That’s when I remembered I was wearing the microphone. There was no escaping it. Jay Sanders was in concert that afternoon, and there was nothing anyone could do about it.

Then I noticed the crowd on the back row…

They were members of my church who were there to help feed the family. During the first few moments of my solo performance, they were laughing. I mean, who could blame them?

But then they started singing.

So loud that I was no longer a soloist. I was now a member of an ensemble.

I’ve seen church done right quite a bit over the years, but no experience has driven home to me the power and importance of our community in Christ like that moment has.

Pastoral ministry is not the stage upon which we showcase our talents for a watching audience. When done right, pastoral ministry is an ensemble. Yes, we’ve been called upon to take the lead but we were never meant to perform by ourselves.

Pastor, step away from your microphone. The church doesn’t need your solo but they could sure use your voice to join theirs. And there will be plenty of times when you’ll need them to sing when you can’t.

It’s these moments of weakness and being in need that highlight the true beauty of the body of Christ. 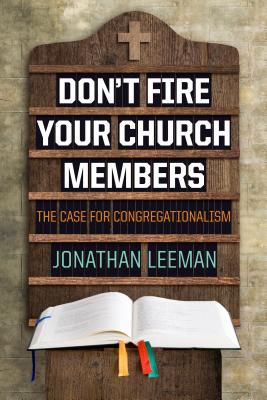 Don’t Fire Your Church Members
The Case for Congregationalism

Previous Post: « Are You Preaching Half the Gospel?
Next Post: Generation Why? Churches Worry They Can’t Reach Young Adults Full of Questions »