Sometimes my mouth moves faster than my brain.

One Sunday, I was making an announcement using some visual cues on our church’s screens. I depended on someone else to advance the slides when I needed them. Only the slides weren’t moving as fast as I wanted.

I was concerned about what I said so I sought the operator out after the morning worship service. As we talked, I thankfully discovered my concern was unnecessary.

I was glad the mix-up was minor and that there was no relational fall out. However, that one quick announcement was a painful reminder of how easy it is to have your mouth move at twice the speed of your brain.

Is it any wonder why James tells us, “Everyone should be quick to listen, slow to speak, and slow to anger” (James 1:19).

Listening is an active process. If we don’t actively listen to others, we can create unneeded tension. By listening quickly and speaking slowly, relationships grow, trust develops, and ministry moves forward.

Allow me to offer four ways to speed up your listening and slow down your speaking.

Every one of us can probably think of a situation where we thought we heard one thing but what they actually said was something completely different.

This kind of mix-up can sometimes result in minor infractions that can be easily mended. But other mix-ups can lead to ruptured marriages, split families, and divided churches.

It’s helpful to speed up our listening by asking clarifying questions such as, “You said this (fill in the subject matter); what I heard you say is this (your interpretation of what you heard). Is that right?”

Not only does this kind of question clarify what the other person said, it also filters out your interpretation biases. We often elevate our interpretation of what was said and end up not hearing what they meant.

A simple example is the difference between the words “dinner” and “supper.” Which of these happens at 12 p.m.?

The answer typically depends on your birthplace and family upbringing. I could be arranging to meet someone for dinner at 6 p.m. while the other person is planning on noon.

If we don’t have a conversation to define our terms, one of us is going to be waiting for the other and both of us are going to be frustrated.

If such confusion can happen with a common word, how many problems can we create using less familiar words? We become active, quick listeners by taking the extra step to define terms.

One way to do this is by repeating a person’s statement in your own words. For example, “When you say this, I think of that; are you thinking the same as I am?”

3. Be comfortable with silence.

There’s something about being in front of a group of people that makes all silence seem three times longer than it is. The larger the group you’re standing in front of, the more deafening silence can be.

Pastors who regularly stand before all sizes of groups need to learn to be comfortable with silence. Remember, there’s “a time to be silent and a time to speak” (Ecclesiastes 3:7).

Resist the temptation to ensure every moment has noise. Mark Twain is attributed as saying, “It is better not to speak and be thought a fool than to speak and remove all doubt.”

Being slow to speak recognizes you don’t have to say something all the time. A moment can be silent. Slow your speech down by controlling when you have something to say.

4. Pause before you speak.

When someone asks a question, the temptation is to respond immediately. Those who are slow to speak avoid this temptation.

Some tend to respond immediately because they don’t want someone to think they’re ignorant or uninformed. They may provide a rapid response in order to maintain a certain reputation.

People come to us as pastors because of our position. They think, “They’re supposed to know stuff and have all the answers. If they don’t answer quickly, then they obviously don’t know.”

But speaking quickly can rob you of the privilege of hearing the other person. When you speak too quickly, you’re often more concerned about what you’re going to say than you are about the art of conversing.

If you pause before you respond, it gives the other person’s words a moment to settle. It also give you a chance to fully hear and then respond appropriately.

Be slow to speak by pausing before you speak.

We each have stories where our mouths have moved faster than our brains. We’ve each had relationship issues we’ve had to work through because of misunderstandings.

These things happen because we thought one thing was the issue only to realize later the real problem was something else altogether.

By intentionally speeding up our listening and slowing down our speaking, we can curb our relational speed bumps. When you succeed once, practice again. 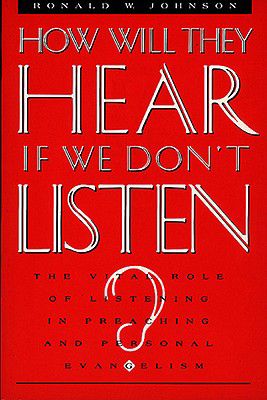 How Will They Hear If We Don’t Listen?