Millennials have been blamed for killing everything in our culture from the hotel industry to canned tuna. Is evangelism next on their hit list? Probably not.

In a recent study from Barna, almost half of practicing millennial Christians (47 percent) say it is “wrong to share one’s personal beliefs with someone of a different faith in hopes that they will one day share the same faith.”

This caused many loud laments on social media from Christian leaders about the faith of millennials and some pessimistic declarations about the future of Christianity in America.

However, the rest of Barna’s findings along with other research presents a more nuanced picture of millennials’ relationship with evangelism.

In most questions about evangelism, generations are similar among practicing Christians—which Barna defines as someone who identifies as a Christian, agrees strongly that faith is very important in their lives, and has attended church within the past month.

Barna found practicing millennial Christians to be no less likely than any other generation to say that part of their faith means being a witness about Jesus—at least 95 percent of all age ranges agreed. Similar numbers say the best thing that could ever happen to someone is for them to come to know Jesus.

Millennial Christians also seem confident in their abilities to share their faith. Eighty-six percent say they know how to respond when someone raises questions about their faith, only slightly fewer than the 90 percent of Gen Xers who say the same.

Almost 3 in 4 practicing millennial Christians (73 percent) say they are gifted at sharing their faith with other people—the most of any generation.

Yet 47 percent struggle with someone sharing their faith with the hope that the other person will come to embrace that same faith.

Part of that hesitancy may result from millennial Christians being most likely to say if someone disagrees with you, it means they’re judging you—40 percent of millennials agree with that statement compared to 22 percent of Gen X, 9 percent of Boomers, and 11 percent of elders.

Most Christian millennials say people today are more likely to take offense if they share their faith (65 percent).

Another factor may be actually having friendships with people of different faiths.

Among practicing Christians, millennials say they have an average of four close friends or family members who practice a faith other than Christianity. Boomers report only having one. Despite those challenges, LifeWay Research found young adults are the most likely to say it’s important for them to personally encourage non-Christians to trust Jesus as their Savior, according to the 2018 State of Theology study.

Among evangelical and black Protestant 18- to 34-year-olds, more than 9 in 10 say personal evangelism is important for them—more than any other age group.

That may be because they are among the most likely to believe that only those who trust in Jesus Christ alone as their Savior receive God’s free gift of eternal salvation.

And despite their being more likely to have more friends from differing faiths, young evangelicals and black Protestants are no more likely to say God accepts the worship of all religions.

So while American cheese may not survive the next generation, we shouldn’t be too worried that millennials are killing evangelism.

But if we want to ensure young adults are sharing their faith, the best way would be for older Christians to disciple younger believers in the church and model evangelistic behavior for them. 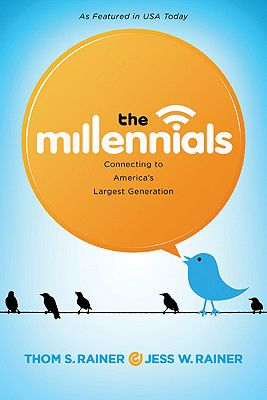 Previous Post: « Why We Should Remember the Promise of God’s Presence
Next Post: 4 Ways the Church Should Respond to Gender-Reveal Parties »