In NBC’s version of the “Good Place,” there is apparently frozen yogurt, philosophy puns and Jacksonville Jaguar jokes, but also a revealing look at why the Christian idea of grace is so important.

The critically acclaimed sitcom, The Good Place, finished its third season with yet another wild twist in what has been a dizzying run for the quirky show about moral philosophy and the afterlife.

The show, created by Michael Schur of The Office and Parks and Recreation, does not present viewers with a Christian version of heaven. Upon learning she died and is now in the good place, Eleanor (Kristen Bell) asks which religion got it right.

From there, Michael brings all the new residents together to explain how they qualified for eternal bliss—the points system. Every act they did on Earth is calculated based on its goodness and then given a point value. Only the people with the very highest point totals make it. Michael explains the point system used to determine who qualifies for the “good place.”

One of Eleanor’s fellow good place residents, Tahani (Jameela Jamil), notes some discrepancies with the point totals. She speaks glowingly about all the charity work she has done and how much more she has done than others, until she suddenly realizes the problem. All her good works have been tainted by her heart.

In Tahani’s case, she was driven by what others thought of her. She realizes all her good works weren’t really good at all. They weren’t for the benefit of others but done from a selfish place.

As Eleanor and Tahani, along with two other neighborhood residents, moral philosopher Chidi (William Jackson Harper) and amateur DJ/devoted Jaguars’ fan Jason (Manny Jacinto), begin to untangle the points system involved in admittance to the good place, they discover things are even worse for humanity.

Not only are humans judged by their actions and the motivations behind those actions in “The Good Place,” they are also judged by the unintended and unseen consequences of those actions. Buying a flower for someone may net a person points, until one factors in the environmental impact of driving to the florist or the horrible working conditions where the flower was grown.

The all-seeing algorithm doling out points based on good behavior seems comforting on the surface for many until they stop and realize just how much bad is mixed into what they see as good.

When there is no God to worship, only a cold, hard computer calculating our eternal fate, we realize we don’t actually want to think about heaven and hell in terms of fairness. When we’re face to face with the points, we realize that being fair leaves humans without much hope.

On NBC’s The Good Place, there is salvation in self-improvement. The four humans work together and become better people for the time they spend with each other. Like the quartet of travelers from The Wizard of Oz, Eleanor, Chidi, Tahani, and Jason learn what it is they’re lacking personally and grow as people through the first three seasons—even to the point of self-sacrifice.

Yet, the very point system the show has established demonstrates how pointless the entire exercise is. The third season ends with them all essentially in the same place as they started. Their quixotic journey, while filled with hilarious moments for the viewer, must be torture for the participants—the very type of eternal torture they are trying to avoid.

This “good place” has every flavor of frozen yogurt one could imagine along with a ton of unimaginable flavors, but it’s lacking the thing it needs most: grace. If there is a point system, we’ve all failed. None of us could make it.

Long before Tahani realized it, Isaiah the biblical prophet was confronted by the disease infecting even the good things he had done. “All of us have become something unclean,” he wrote in Isaiah 64:6, “and our righteous acts are like a polluted garment.”

In The Good Place remaining loyal to the Cleveland Browns gains you +53.83 points, but even devotion to an inept team won’t gain you access to heaven. For that, we’ve always needed grace. 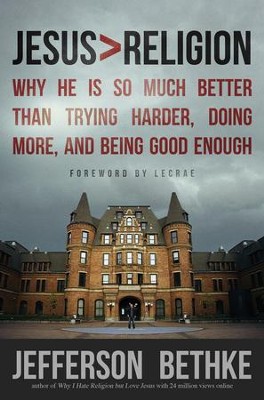 Jesus is Greater Than Religion: Why He Is So Much Better Than Trying Harder, Doing More, and Being Good Enough

Previous Post: « 7 Ways to Make Sure New People Never Come Back to Your Bible Study
Next Post: 4 Unexpected Parenting Lessons From the Book of Job »