According to Genesis, God created everything in six days before resting on the seventh. But around a quarter of churchgoers say they don’t follow His example.

Seventy-seven percent of churchgoers say they take an intentional day of rest and most do so on Sunday, according to a new study of Protestants who attend church once a month or more from Nashville-based LifeWay Research.

Seven in 10 churchgoers take their Sabbath on Sunday. Few take it on Saturday (5 percent), Friday (1 percent) or Monday (1 percent). For 23 percent, they don’t take a day of rest.

“Americans are a privileged society for people to often enjoy two days off a week. For many, this may make observing a Sabbath day something many churchgoers don’t give much thought to,” said Scott McConnell, executive director of LifeWay Research.

“Today, however, we see blue laws being repealed and most businesses open seven days a week. U.S. Postal Service trucks are now out delivering packages on Sunday,” McConnell said. “Taking a Sabbath may be something people have to become even more intentional about.”

Females (26 percent) are more likely than males to say they don’t take a Sabbath rest (18 percent).

Assemblies of God/Pentecostals (32 percent) and Lutherans (31 percent) are more likely than Baptists (18 percent) to say they don’t take a day of rest.

A 2015 LifeWay Research survey found 85 percent of pastors at evangelical and historically black churches say they unplug from their ministerial duties at least one day a week.

More than half of Protestant churchgoers (56 percent) say taking a day of Sabbath rest each week is a biblical command that still applies today. A quarter disagree, and 19 percent aren’t sure.

“Almost half of church attendees aren’t sure if one of the Ten Commandments still applies today,” said McConnell. “Perhaps the most important biblical teaching on the Sabbath came when Jesus said, ‘The Sabbath was made for man, not man for the Sabbath.’ Clearly God didn’t need the rest when he modeled it, but humans need to recharge regularly.”

Churchgoers in the South (58 percent) are more likely to see the biblical command of a Sabbath rest as applicable today than their counterparts in the Northeast (46 percent).

Baptist and non-denominational churchgoers (60 percent each) are more likely to say Sabbath is still applicable than those at Assemblies of God/Pentecostal congregations (45 percent).

Going to church is the primary way most churchgoers say they observe a Sabbath. Almost 8 in 10 (79 percent) of those who observe a Sabbath say attending a religious service is part of their Sabbath-keeping. Two-thirds (65 percent) say they do so by spending time with family.

Fewer say avoiding paid work (33 percent), taking a nap (30 percent) or avoiding labor or chores of any kind (25 percent) are part of how they observe a Sabbath day.

A small number say they avoid shopping (11 percent), refrain from attending paid events or entertainment (6 percent) or refrain from media of some kind, like TV, radio or social media (3 percent).

“There is more variety in how people observe the Sabbath than when they observe it,” said McConnell. “But there are far fewer people avoiding things on the Sabbath, like paid work and chores, than those who say they keep the Sabbath by doing things, like attending church and spending time with friends.” White churchgoers are among those more likely to say the Sabbath still applies (59 percent), that they rest on Sunday as opposed to other days (75 percent) and that they observe the Sabbath by attending a religious service (84 percent), spending time with family (73 percent), avoiding paid work (36 percent) and taking a nap (35 percent).

Churchgoers with a high school degree or less are among those less likely to say the Sabbath still applies (52 percent), that they rest on Sunday as opposed to other days (66 percent) and that they observe the Sabbath by avoiding paid work (29 percent) and spending time with family (57 percent).

They are also more likely to say they don’t take a Sabbath rest (25 percent) than those with some college (18 percent). 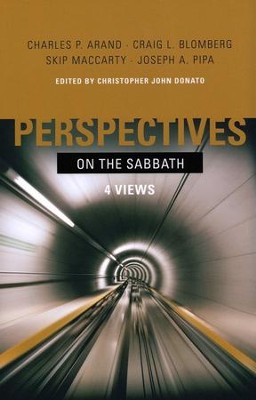 Perspectives on the Sabbath: 4 Views